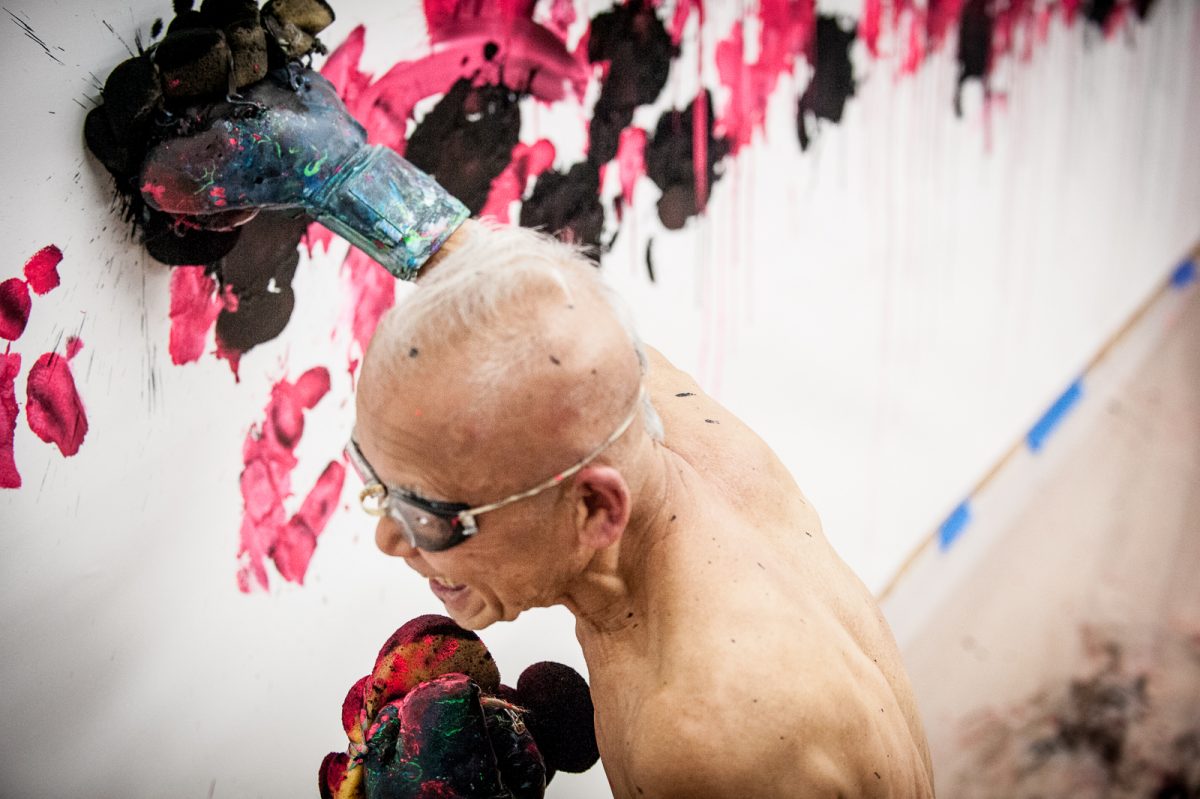 Ushio Shinohara slams a canvas with his paint soaked boxing gloves to create one of his boxing paintings at CUAC, January 21, 2013. Photo by Zoe Rodriguez.

Ushio Shinohara, goggled, bare-chested and sporting a pair of paint-splattered shorts, hams it up for his audience: lifting his foam-topped boxing gloves, he grins broadly and prances about the gallery floor, allowing a dozen and more phone-wielding photographers to snap their fill. At 81, he’s a charming, infectious figure and as he dips his gloves in buckets of thin paint and prepares to pummel a large piece of gessoed canvas, his audience is enthusiastic and encouraging. Beginning at the far right, throwing first a black-dipped right and then a neon-pink left, he weaves along the canvas, landing jabs and swipes that become large vivid “brushstrokes.” Approaching the end, he lags momentarily. But regains his wind long enough to finish off the last blows and complete his newest work. Reminded to “sign it,” he dips a bare foot into a bucket of paint and with it kicks the canvas. Switches feet and repeats. 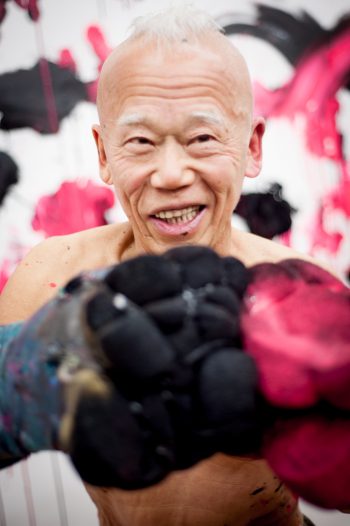 Ushio Shinohara before the boxing painting event at CUAC. Photo by Zoe Rodriguez.

Ushio Shinohara first began his “boxing paintings” – or “boxing happenings” we might call them, as the artist likes to emphasize that his original idea wasn’t concerned with an end product – over fifty years ago. He emerged on the tail end of Gutai, a postwar art movement in Japan that pioneered the happening, creating event-centered works often tinged with aggression. Scholars see these artists as the expression of an uprooted generation searching for freedom and identity in a conservative society. Call them proto-punks.

Shinohara even had a mohawk. When he would assault his early canvases with not only his boxing gloves, but his body and head as well, his stylized hair became a sort of calligraphic brush. His happenings were a radical appropriation of the idea of “action painting,” minted in New York and exported to the world. Enthralled by America and its culture, Ushio visited in the late ‘60s. And stayed, making works full of energy, color and pop culture references. He overtly copied paintings by American pop masters, crafted giant motorcycle sculptures from discarded cardboard, and portrayed the traditional Japanese subject of the Geisha as neon- bright and beautifully grotesque.

Along the way he met Noriko. Twenty years younger than Ushio when she arrived in New York to study art, Noriko was quickly attracted by the force of Ushio’s personality and sucked into the pell-mell of his Bohemian lifestyle. She also became pregnant. Was cut off from the financial support of her family. And has remained with Ushio ever since. Their relationship is the subject of Cutie and the Boxer, a documentary by first-time filmmaker Zachary Heinzerling that premiered at Sundance in January. Theirs is the story of so many artist couples it has almost become a cliché – the wife ignores her own work to support the career of her talented (though frequently drunk/domineering/narcissistic) husband. The de Koonings and Pollock-Krasners made the lifestyle almost de rigeur for mid-century artists. 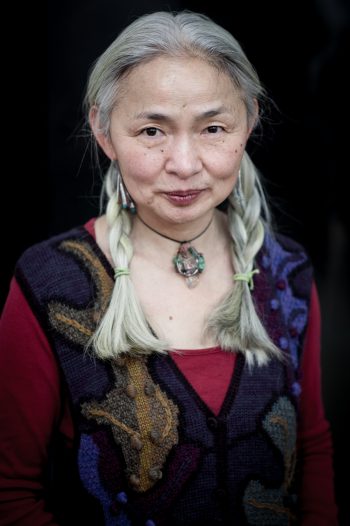 Noriko Shinohara at a private reception after the screening of Cutie and the Boxer. Photo by Zoe Rodriguez.

Ushio has garnered sporadic bouts of interest over the past fifty years, especially from his native Japan, but as he approaches eighty, and Noriko sixty, the couple continues to struggle to pay the rent. As Cutie and the Boxer unfolds, Ushio is energized by a renewed interest in his boxing paintings, which with the new fad for post-war Japanese art have attracted the attention of galleries and museums and the art world at large. Noriko, meanwhile, struggles to come to terms with the family’s needs, her life choices, and her own work as an artist. She is tired of playing the role of assistant, still struggling after forty years to find her own voice, and to keep Ushio quiet long enough for it to be heard.

Cutie and the Boxer is a story about art, but it’s also a love story. Money is tight for the Shinoharas. Their adult son appears to be struggling with the same alcoholism that plagued most of Ushio’s life; as Noriko and Ushio brush up against each other in their small apartment, their unblunted egos still manage to poke each other; and their conversations are full of the type of nuanced passive-aggressions that are the natural tendencies of couples who have been married forty years. But there is also true affection. Ushio, sober since contracting an allergy to alcohol, is playful but not overbearing. He accepts Noriko’s needling him and her need for independence, and takes his role as “Bullie” in stride. He still won’t say out loud how much he needs or appreciates Noriko, but his dependence on her is obvious. And despite Noriko’s lament, she’s still transfixed by her partner. When he’s gone to Japan to try to sell some work, Noriko is visibly excited on his return, racing down the stairs to let him in. At times they may seem like sparring partners, but none of their blows are in earnest, and neither wants to leave the ring. 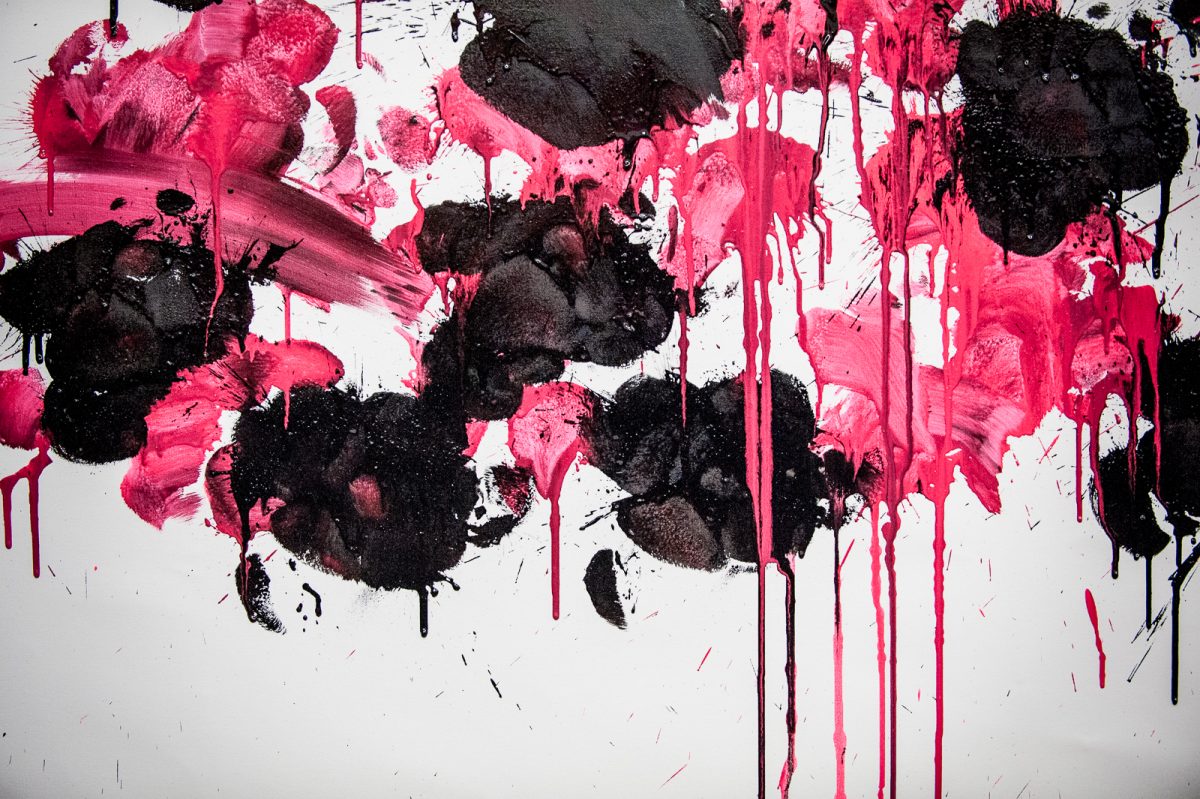 As Heinzerling crafts the film, which won best documentary at Sundance, Noriko emerges as the star, while Ushio plays a supporting role to her story. In the art world, though, Ushio is still the star. With the renewed interest in postwar Japanese art, he has received a number of invitations to recreate his boxing paintings in various venues, including museums. And last month one of his works made the cover of ArtNews. 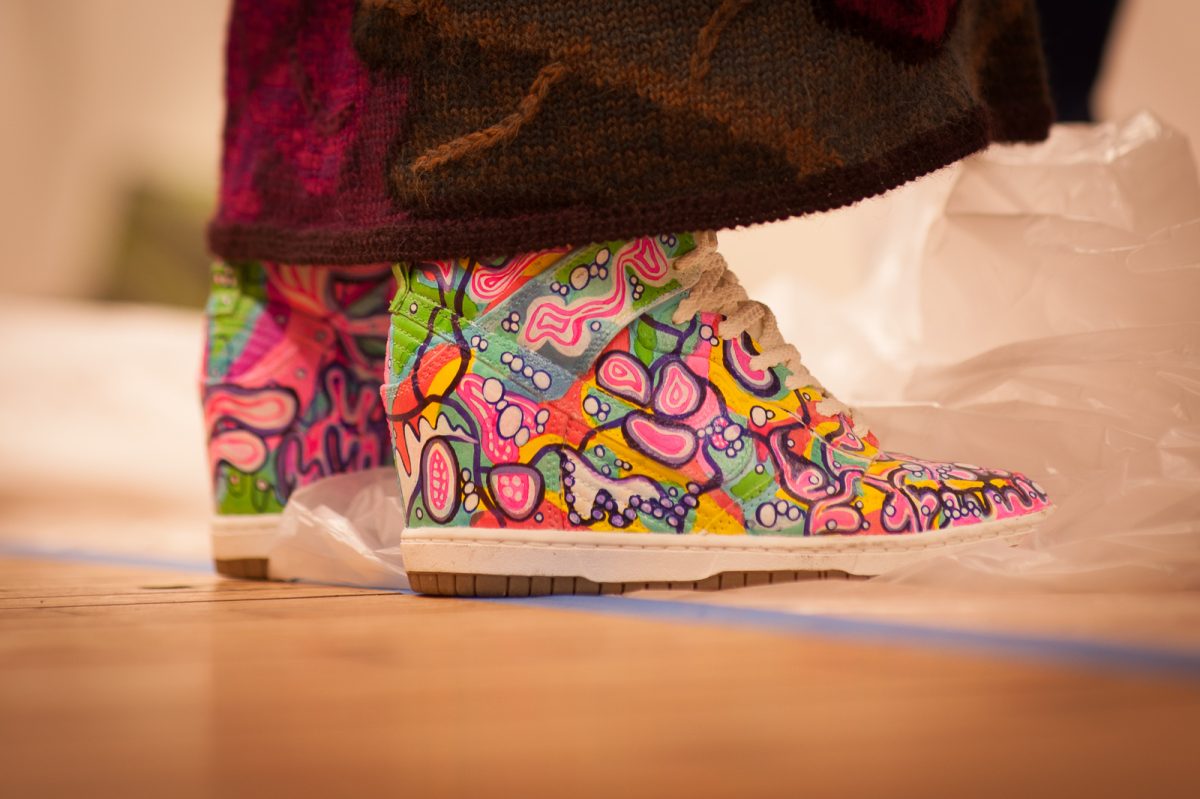 Locally, Salt Lake’s CUAC is currently running an exhibition of Ushio’s works called Shinohara: Boxing Painter. The exhibit features a number of the artist’s new works, full of energy and play, delighting in the simple visceral pleasures of art-making. There’s a suite of feverish drawings in electric colors, and a few small sculptures. But, like an aging pop star condemned to calls for his early work, Ushio knows what people really want to see are his boxing paintings: works from 50 years ago.

CUAC’s walls are dominated by a number of large, and some small, boxing paintings. After the Salt Lake screening of Cutie and the Boxer at the Broadway Theatre, the gallery held a private event featuring Ushio as boxer in front of a long white canvas. On January 21st, his newest boxing painting was created in front of a live gallery audience. 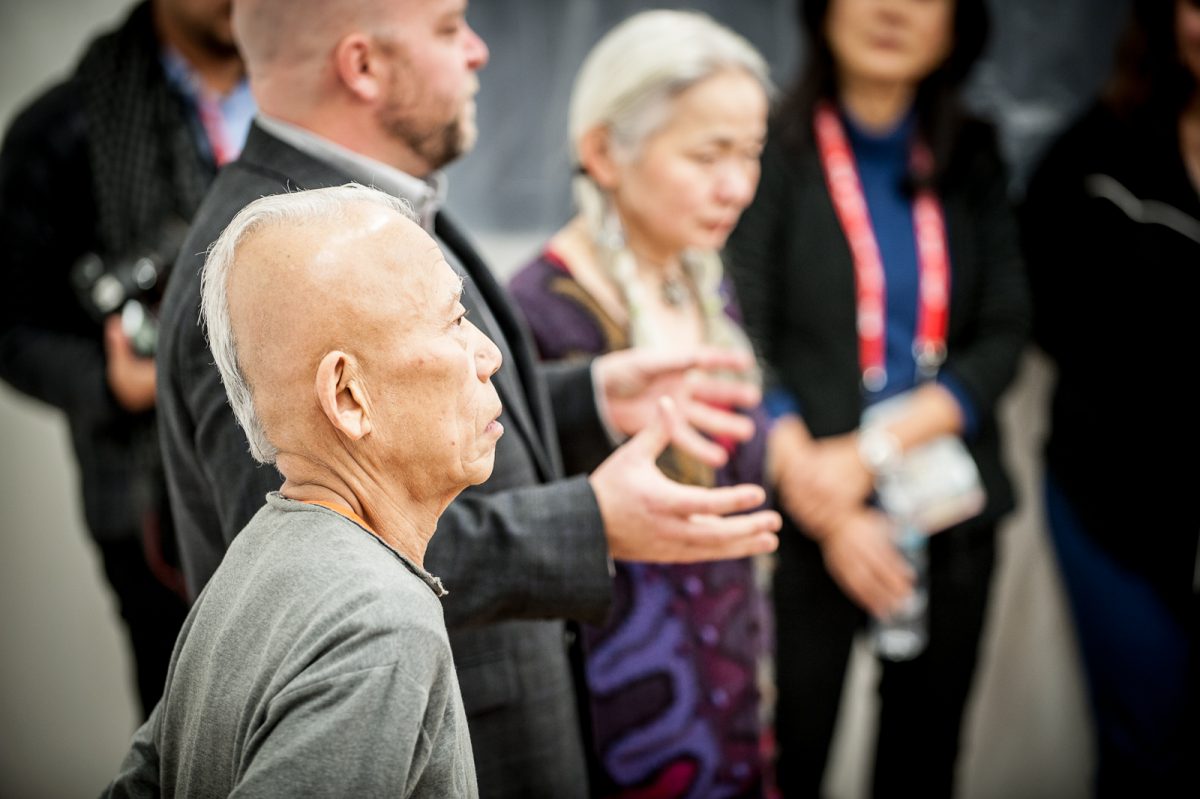 Ushio Shinohara (front), CUAC Executive Director Adam Bateman, and Noriko Shinohara at a private reception after the screening of Cutie and the Boxer. Photo by Zoe Rodriguez.

What, then, are these boxing paintings? Are they happenings, or paintings? Aesthetic objects or historical re-creations (Ushio is once again sporting the mohawk of his early years)? Like seeing any artwork come to life, watching the boxing performance is an exciting moment of revelation. The results, though, are mixed. Let’s face it, when an artist is jabbing at the canvas with closed eyes, — as Ushio describes his process — absorbed in a meditative state the results are (and here the pun seems unavoidable) hit and miss. Some works are pretty lackluster. They are what you might expect: large black blobs traveling across the canvas. Some are just fragments of larger canvases, poor documents for a grand event. 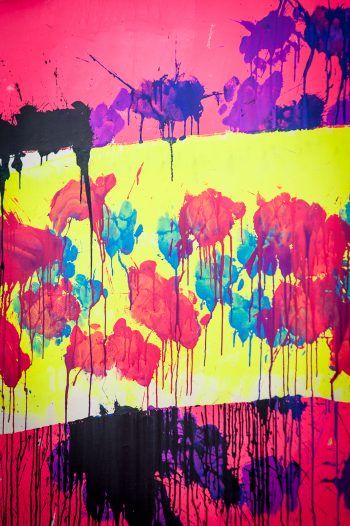 “Detail of a work by Ushio Shinohara. Photo by Zoe Rodriguez.

A few, though, are startlingly attractive. This might be due, in part, to chance. But with some of the canvases an obvious attempt has been made to create an aesthetic work, with blocking of certain areas, layering of colors, and other modes of composition. In this sense, the boxing paintings suffer from the contradiction of their own argument. Can a work really be about the action, about the moment, and also be crafted to appeal? Signed to sell? Can an act of liberty and rebellion really survive the neutering containment of a gallery or museum? Or do we replace the wild antics of angry youth with the impish spectacle of a harmless octogenarian.

Not that the boxing events are presented as grandiose historical moments – it’s all good-natured fun. Ushio is endearing. The event is lively. But there’s a hint of unease: a sense that the enthusiasm for this octogenarian artist, signing his works with a footprint — like the keepsake of a newborn baby — might be slightly patronizing.

What we are really watching, what we are attracted to, is a story. Or, rather, history. We get the chance to watch something that comes with the prepackaged veneer of historical importance. And if we were interested in his-tory at the CUAC, we might have been equally interested in seeing her-story. At a reception for cast and crew after the Park City premiere of Cutie and the Boxer, JGO Gallery hosted a boxing painting demonstration and held a small, and unfortunately short-lived, exhibition of works by both Noriko and Ushio. Thrown up next to Ushio’s very male works, full of poundings that end up looking like so many oversized stains on a bed sheet, Noriko’s subversive narratives of Bullie the artist and his neglected wife Cutie come off as fresh, as subversive (“he’s charming now and you want his works in your museum,” they seem to say, “but see what I had to put up with all these years”). They seem as rebellious as pounding paint-dipped boxing gloves against a wall was in the 1950s. Maybe one day they too will receive the seal of approval from the art history books.

Ushio Shinohara poses for the cameras in front of his newest creation. Photo by Zoe Rodriguez.

Shinohara: Boxing Painter is at CUAC in Salt Lake City through March 10.