“By the Sea,” the characteristically collectible catalog Susan Meyer put together for her annual presentation of Brian Kershisnik’s new directions for 2019, includes a challenge from the artist to everyone who’s ever written, or even thought about, his art:

The heavy symbolic weight of books in my work is yet to be consciously fathomed or described. …

Indeed, very little of the extensive literature concerning this popular artist focuses on the accessories that share space with his human subjects. Considering how few painters so completely exclude merely ornamental set dressing, his choice to include something should obviously matter. Based on a quick study, they are all tools of one sort or another: if not literally then in how they function in the painting. The oversight he refers to may be particularly true of books, but then books manifest most clearly the reason why the paintings that contain them exist in the first place. 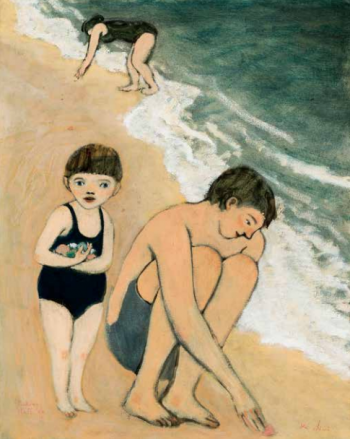 The short explanation for the many books he has included over the decades is that they demonstrate the painter’s curiosity, his search for the reality underlying appearances, for patterns, and for their meanings. He frequently states that he paints because he is “looking for something,” and books provide a nearly universal symbol for that quest. Place his research, his own reading of nature and culture, as the bull’s-eye of a target, and the next ring might represent his democratic conviction that everyone can participate in the search. Next, books don’t just channel truths from on high: they’re human products, as a young friend discovered when she wrote a fan letter to a famous author, a seeming institution, and received a personal reply. Finally, there are probably as many significant points raised by his painted books as there are images of books in the paintings: Kershisnik frequently revisits his themes, even those he has successfully explored, still seeking new finds.

In the pared-down dramas that constitute his art, events — whether they occur, have just occurred, or are about to occur — clearly outweigh the details of their accomplishment. Someone eats, writes, speaks, plays, reads, but the viewer must wonder, or assume, or take for granted what or why. Kershisnik’s brush renders visible many of the questions that surface from time to time among us. He rejects the prejudice that art no longer has important work to do, and his art undermines the notion that today’s quandaries are somehow different from or more elusive than those known to the past. If there is a sense of modernity in the predicaments his protagonists confront, there is an Old Testament quality in the somber gravitas, pierced by occasional joy, with which they face them.

But while the scenes he imagines and conjures into visible form are not meant to elicit specific revelations, they do share with the artist, his audience, and each other certain common apprehensions, and these are adaptable to showing, and sharing, some of the ways he may turn his observations and experiences over in his mind and on the canvas. In a 1970 book on the Pre-Raphaelites, who are among the many historic painters Kershisnik often revisits during his wide travels, Tim Hilton said of Edward Burne-Jones, “He does not paint to discover things, and this is why his art does not have a career.” Many artists, some more popular than Burne-Jones, share his lack of curiosity. Andy Warhol repeated the same worked-over icons throughout his career, without showing any interest at all in what lay beneath their superficial celebrity. Fully appreciating Brian Kershisnik’s accomplishment begins with contrasting artists like those with his view of the cosmos that, as he says in “By the Sea,” “includes a lot of searching, a lot of wonder, a lot of patience and a lot of sorting out.” 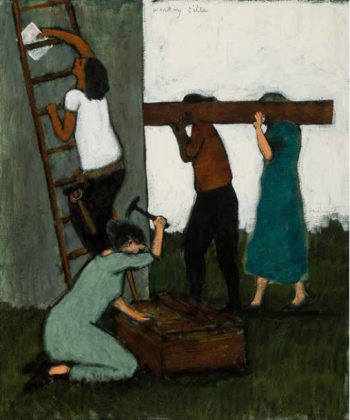 For example, in “Seven Women Reading,” individual postures and expressions generate a visual rhythm over books printed on paper and bound between boards. Paradoxically, in this way he achieves the more universal statement. Surely, if one or more had been reading from a tablet or a cell phone, or listening through ear buds, it might have looked more inclusive, but it’s not just nostalgic sentiment that led to this choice. After all, the words in a book are the closest practical equivalent to being “carved in stone.” When the reader turns the page, they are still there, ever available to return to, never needing the translation a digital file requires. If a word is a symbol for some meaning, a digital text is a picture of a word, twice removed from the original (or three times removed, if Plato was right and the thing our senses discover is itself a copy struck from an ideal). The book is as close as we can come under the circumstances to a direct encounter. It’s also possible that, in another age, one where the written word, whether scripture or textbook, was not under assault, Kershisnik would not have felt the urgency regarding books that he expresses here.

In “Working Title,” a hammer takes the place of a book and the relation between the women and their tools changes, but there’s nothing new in the sense of identity that labor bestows on those who undertake it. Their disappearance into their work is suggested by the way the lumber two of them carry hides their faces. Or this could be about the contingent nature of so much labor, a condition that was known to the ancient Hebrews. If we’re lucky, in the midst of our affairs we might know the next step, might see how it grows out of what’s been done so far: but how fully can we see all the way from the origin to the idealized goal? 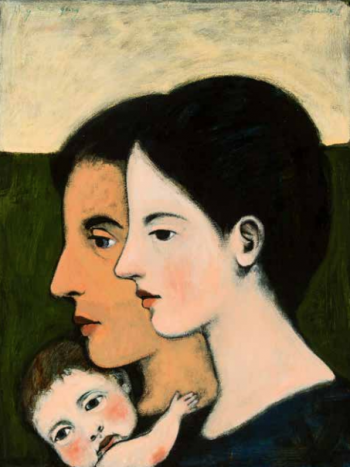 Both “They Keep Going,” showing a presumed family trio, and “Keep Going,” featuring a couple, share their title language and an initially somber mood. Together they demonstrate the frequent thematic continuity and ongoing exploration of an idea, question, or “hunch,” as he once called it, in Kershisnik’s body of work. His concern here may be the value of perseverance in life, here seen in a domestic setting. It’s important that the gravity, the seriousness of the persons be clearly displayed: they go on not because they enjoy every moment, but because they must, even when it’s unpleasant. As an equation of our time has it, the largest part of success is “just showing up.”

“Au Revoir Printemps” (Goodbye Spring) reminds us that spring and fall are welcomed times of transition, when the world changes its colors and renews itself, but that such times of refreshment are always followed by periods that call for endurance — the labor that summer permits, but also makes necessary, the austere beauty of winter — like vacations that are inevitably followed by a return to routine.

“Two Holy Conversations” is likely the result of a recent reevaluation of the artist’s understanding of his role, not as the painter, but as his own subject. Asked why they so often look like him, he replies that everyone he paints contains a part of him: perhaps of the universal he seeks in himself. Here, without losing sight of that understanding, he explores a more expansive view of what “universal” may actually look like.

If the objects, activities, and those who dwell in Kershisnik’s scenes have evolved, so too have the locations. This is all-but-inevitable, especially in an artist who rejects Abstraction in favor of limning the visible world. Joshua Sperling, in a biography of critic John Berger, points out that “Visibility takes place somewhere,” and argues that representation involves “the local and the particular.” “Two Holy Conversations” takes place in a parklike setting that the artist has used frequently, and that sometimes represents a place similar to, if not specifically tagged as, Heaven. In “We Go With Obstacles” and “In the Woods,” we can see the difference between that parklike landscape and a Brontë-esque setting where nature participates in the drama taking place within it. Recently, the amateur performances, like that of “The Next Room,” which used to take place in homes and around kitchen tables, acquired more professional venues, as his theatrics found a stage, like those in “Protected by Performance,” and an audience, even if only a small one. Also new, within the last year, are the seascapes that lend the exhibition its title. Viewers wanting to know more about these should start with his candid catalog statement, then see what comes to mind while contemplating them, before seeking a critical opinion. 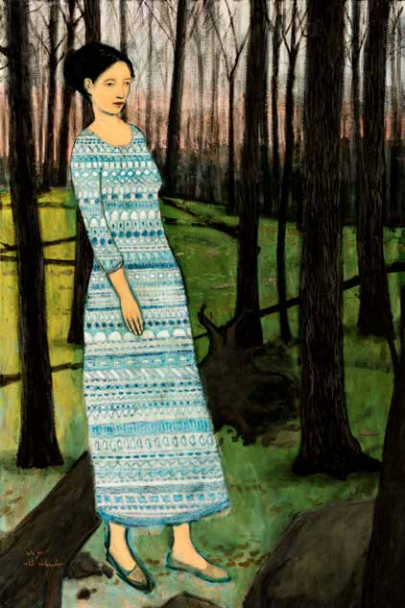 Looking further into “We Go With Obstacles,” Kershisnik always has enjoyed ornamenting the bodies of his human figures by brushing and stamping their clothing, but here there appears to be a flashback to his early days as a student of architecture, before he turned first to ceramics and then to paint. The dress of the woman, with its tiers of brackets, blind arches, dentils, and so forth that ornament her towerlike form, suggest a parallel between the upright human posture and the builder’s achievement.

Finally (for now), before mass entertainment became intoxicated by its power to mimic the effects of graphic violence, storytellers had to communicate the impact of physical damage the same way they did emotional injuries: through suggestion grounded in careful observation. In “The Wounded Become Thirsty,” Kershisnik recalls the sort of detail they might have employed, and because he never employs the painter’s equivalent of a full stop, the viewer is free to go on thinking about image and idea, to interpret just what the wounded might thirst for.

A couple of times a year, once at Susan Meyer’s in Park City and once at David Ericson’s in Salt Lake City, his local community is offered a chance to see Brian Kershisnik’s recent efforts presented together. This indulgence offers a chance to witness the key to his “career,” as Tim Hilton calls the artist’s expressive progress. In putting together the painted version of what takes shape in his mind (and if only that were one hundredth as easy as it sounds), Kershisnik repeatedly reworks many of his efforts, searching for what has never been seen before, but which will assuage, however temporarily, his curiosity. Among the past masters who inspire him, when the artist painted over a passage to change the composition, it was called a pentimento, because he “repented” his previous error. If it could be seen through the entire process of its painting, a typical Kershisnik might be revealed as a field full of such repentances. On the strength of these two-dozen efforts, Brian Kershisnik employs the modesty and judgment such a history reveals to excellent effect.