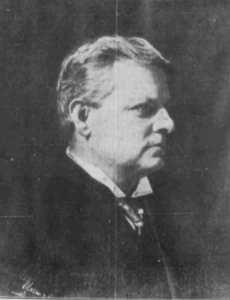 H.L.A. Culmer, who apprenticed in a London print shop, emigrated to the United States in 1868. In Utah he studied with Reuben Kirkham and Alfred Lambourne, the latter also being a favorite traveling companion on painting trips in the Wasatch Mountains. During his lifetime who was one of Utah’s most popular landscape painters, known for his dramatic scenes.

He also worked as a stage manager and directed plays as well.

“Shoshone Falls in Snake River” 1909
“Augusta” a painting of the natural bridge formation, given as a gift from the Commercial Club to President Taft.