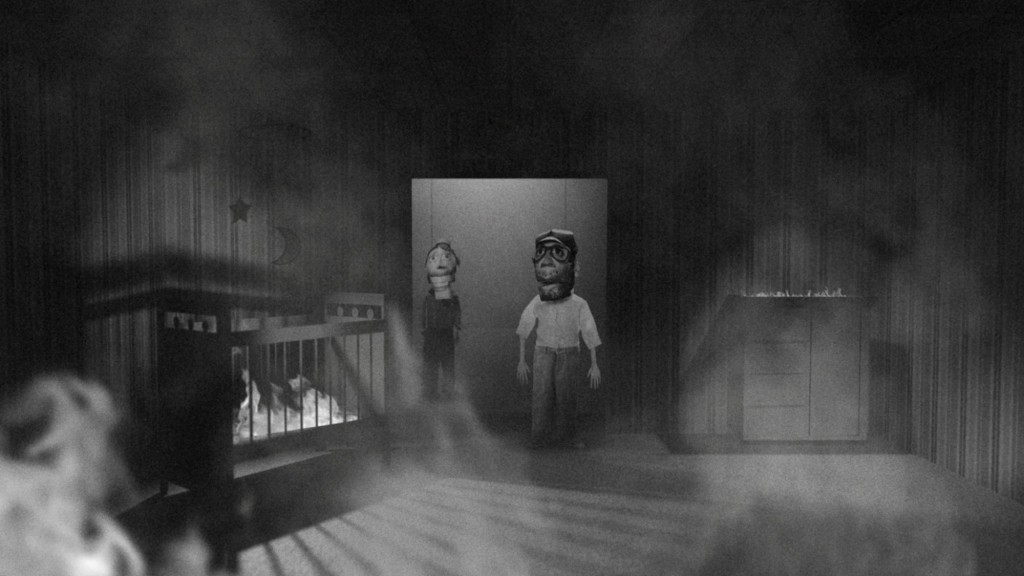 In conjunction with their current exhibition Cinematic, the CUAC in Salt Lake City is presenting three free film series featuring work by local filmmakers. With an abundance of visual imagery, ranging from black and white animation to lushly colored poetic references, these short films by Also Sisters, Jan Andrews, and Matt Glass brilliantly achieve a unique form of realism, deeply seated in the consciousness of self.

The trio of works by Sonia and Miriam Sobrino, a pair of sisters from Galicia, Spain who are completing masters degrees at the University of Utah and create film under the name Also Sisters, explores existential questions of life and death. Through meaningful and abstracted signification, their “The Executioner’s Vacation” reveals the shame and ultimate retribution in the consciousness of an executioner, as he tries to escape the terrifying reality of his life. “Dialelo: El Círculo Vicioso de la Vida” weaves iconic images of ritualistic life (and death) — scenes from a bullfight, religious festivals, a fireworks display, a prison — to the somber melody of a Spanish folk singer. “O Olláparo” is a micro-narrative hinging on the mortality of one elderly farmer. The film’s surreal, abstract, fragmented narrative, an attempt by the farmer and his mute son to disrupt the will of the mythical beast of the title, ultimately makes a statement brimming with realism on the finite yet fragile barrier between life and death.

Jan Andrews is a veteran of Utah’s experimental film scene and her pieces selected for this screening are works that explore existential responses to temporality.  Her 1993 “Geography of the Imagination” is an expository examination of the forces of life that are detached from human beings in space or place in time.  Extremes in geography such as a glaciers, Arches National Park, caves and tornadoes emphasize the disconnect. Her other two films, “My Dinner with Anna” and “Seduction,” see the temporal through much more personal narratives. The first introduces Anna, an absurd character whose every vicissitude of emotion is revealed in a variety of absurd circumstances; while “Seduction” (from the 1980s) is a response to the objectification of women, easily seduced by the artifices of fur, jewelry, and cosmetics.

Matt Glass, who studied at Weber State before leaving for the Cranbrook Academy of Art and then Los Angeles, uses artifice to heighten consciousness in his films, which are commentaries on the disconnected nature of reality, done with deliberate contrast to the world of the unified narrative we like to create for ourselves. The images he creates are minimal and iconic and have a surreal sense of being that expands one’s sense of realism with the use of the absurd and uncanny. In “Testeron” a scene of two hand puppets playing out an iconic husband and wife sitcom scene gives way to a desert landscape, an obscene gesture, and a slow-moving turtle.  In “Blank Sign” a self-important artist figure drives his car through the night, telling an unknown listener over the phone about his great artistic breakthrough.  This is interrupted by his head-on collision with the car of a female driver, causing the two figures to unite mid-air where they sail heavenwards, framed by a cliché heart symbol. “Citadel,” the final piece, is an uncanny look at meaningless in a solipsistic world devoid of passion. A puppet figure that resembles the filmmaker is stuck in a doom-laden interior he tries unsuccessfully to escape: the edifice, his own life, has already been well trod and his path cannot be retraced.

Each series lasts about a half-hour, a seemingly short time to probe the profound questions of being and life, but the right amount for these excellent films laden with nihilism and resignation. One walks away from these films inspired, questioning, and ultimately determined to make one’s own reality that of real meaning, with any existential doom in the mind and nowhere else.