Cristin Zimmer at the Gittins

Tantalizing legend: around 1470 the Florentine master Andrea del Verrocchio undertook to paint the baptism of Christ for the Church of San Salvi, assisted by two apprentices. One, Alessandro Filipepi, on account of his physique was called “the little barrel”—Botticelli in Italian. The other, from nearby Vinci, was called Leonardo. These two painted a pair of angels witnessing the baptism, and what has kept this story alive is that after he saw Leonardo’s angel, Verrocchio supposedly threw away his brush and retired from painting for good.

It’s rare for a student to best the teacher. What’s more, most audiences regard student work with caution. While Leonardo transcended his assignment, art made in school is never autonomous. The broth characteristically has too many cooks. Neither does having a committee of artists help—unless we decide that committees can make art. 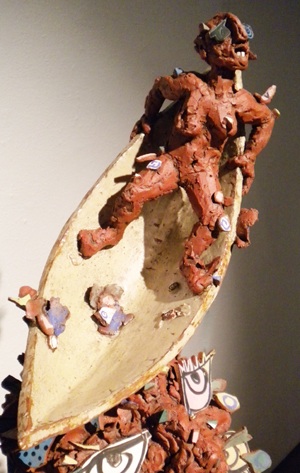 Cristin Zimmer’s MFA exhibit at the U of U’s Gittin’s Gallery shows her working on an impressive scale with a clear artistic vision. The huge size and confrontational vigor of these eleven busts and figures recall the expressionism of Peter Voulkos, while their representational modeling and satirical content bring to mind Howard Kottler. What’s missing, however, is a quality visible in some works photographed in her studio last year, in which surfaces consisting entirely of shattered fragments create an unsettling ambiguity: do they cover a figure erupting through them, or does chaos mimic human form? One can legitimately wonder what pressured her to simplify her investigation of “identity” in the current direction. Speaking to 15 Bytes last fall (in a video interview found here) about the new, figurative element in her work, Zimmer says “but as I entered graduate school, my work started to go in that direction . . . more.” Then she says she might abandon clay in favor of Andy Goldsworthy’s approach to nature: performance/installation with photo documentation. Is there anyplace but art school where so many influences fit so close together?

Still, Zimmer brings fresh air with her from Colorado. An avowed (never “admitted”) Feminist, she styles herself a “crafts-woman,” yet her approach to men and women isn’t blame or praise, but meticulous observation. It’s also inventive and clever. One repeating metaphor that combines a human head with a luggage carousel can be read as literally as you like: I arrived here but my brains ended up somewhere else; how many ideas, how many memories, do I need to pack for this journey? That packing (and bearing) are traditionally women’s roles may come to mind now, later, or not at all. Unglazed red clay, spontaneously worked and left rough for the most part, bespeaks raw flesh, or something even deeper: vulnerable sensibility or unmediated, emotional response. Like medieval saints, the figures are allegorical, and their attributes—open roads, boats, fish, bestial anatomy, animal fur—lend external scale to their interior realities. Like the medieval images of hell under which Leonardo prayed, they are alien and threatening. The presence of humor and anger so close together fits the world we live in, even if it makes it hard to laugh or get mad. 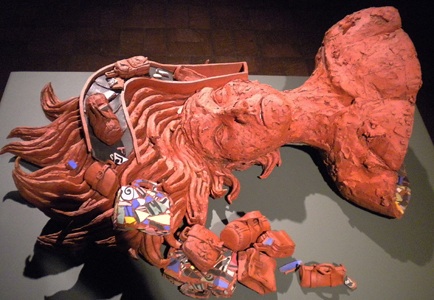 Surface . . . ing, an MFA Exhibition by Cristin Zimmer is at the Gittins Gallery, on the University of Utah campus, until May 27.