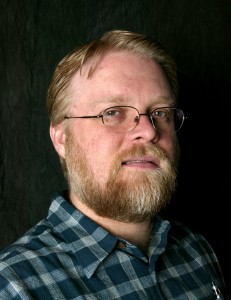 Is there a market for Mormon literature even among the LDS?

Is the goal of writers who, with apologies to Emily Dickinson, see “Mormonly” to seed crossover work for those outside the tradition, or, like the once thriving Yiddish press that spawned Nobel Laureate Isaac Bashevis Singer, simply write and publish works for one’s own community?

If anyone can answer these questions, it’s probably Christopher Bigelow, publisher of Zarahemla Books.

Bigelow began his career as an editor at the LDS Church’s Ensign magazine. A graduate of Emerson College and Brigham Young University, he co-founded and edited the Mormon literary magazine Irreantum and the satirical Mormon newspaper The Sugar Beet. He is the author, co-author, or editor of seven books on Mormonism, including a novel, with more on the way. He has received an editing award and an honorary lifetime membership from the Association for Mormon Letters. Currently, he runs the small Mormon press called Zarahemla Books and works as a freelance writer, editor, and instructor.

Bigelow spoke with 15 Bytes about the state of his own tradition’s literature from the heart of the Mormon Corridor, Utah County. (Look for an excerpt of Bigelow’s upcoming memoir Mormon Punk: From LSD to LDS in the July edition of 15 Bytes’ SUNDAY BLOG READ.)

15B: Zarahemla Press is focused on Mormon writing. Isn’t there already a plethora of LDS publishers out there? What niche does Zarahemla fill that, say Deseret Book, Shadow Mountain, or Covenant don’t fill?

The reason I started Zarahemla in 2006 was that I knew of several manuscripts that could not find a home. These stories were too worldly and realistic for Deseret Book and the other publishers in that strict mainstream LDS mode, and at the same time these manuscripts seemed to be too Mormon for the world—in other words, for presses outside of the Mormon culture. At that time, only a handful of publishers were publishing culturally liberal Mormon literary fare, and not very often. Signature Books has been the main alternative Mormon publisher, but we’re lucky if they do one book of fiction a year. So I started Zarahemla to help fill that gap.

15B: Can you give us a brief survey/range of your title list?

Zarahemla publishes stories connected in some way to Mormonism, whether fictional stories or nonfiction, such as memoir. We’ve even done one “autobiographical novel,” Coke Newell’s On the Road to Heaven. We are open to fresh, LDS-related genre stories—we’ve published supernatural, vampire, cyberpunk, dark fantasy, and thriller/crime stories. We’d love to do some good Mormon horror, sci-fi, and post-apocalyptic stuff. At the same time, we also publish a lot of literary and historical fiction and memoir.

15B: Your website says that your books—the content of which ranges from historical to vampires, but all with an Mormon theme—have edgier content and style than other LDS publishers, but that they are ultimately faith-affirming. Can you talk more about that? What’s a deal-breaker for a potential manuscript submission to ZB?

Some of our books would be the equivalent of PG-13 or R. By “ultimately faith-affirming,” we mean stories that allow room for faith and don’t try to show that Mormonism is an untrue faith. Many of our stories create big, messy, realistic human dilemmas, including doubts about faith, bad behavior by leaders, etc. but then allow for a glimmer of redemption at the end.

We wouldn’t publish something pornographic or something that went into too much detail about the LDS temple. We probably wouldn’t publish something like Brian Evenson’s “Father of Lies,” which is a (very) thinly disguised polemic against Mormonism, although we might consider doing something as dark and challenging as his novel “The Open Curtain,” which is quite graphic in its horror and insanity elements but doesn’t seem to have a huge agenda against Mormonism, at least in my memory.

15B: Who is your market for your titles? Are you gunning for a crossover (non-LDS) reader? What success have you had marketing outside of the Mormon population?

Our main market is the small Mormon literary scene. This scene is so small that we consider a title successful if it sells 100 copies. Occasionally we’re able to crack a bigger readership among Mormons who are open to something outside of the Deseret mold, but only two titles have ever topped 1,000 in sales, and only one title has cracked the 2,000 mark.
We have tried to market outside of Mormonism, but I don’t think we’ve had any big success, and we don’t consciously worry about it much anymore. If non-Mormon readers stumble upon one of our titles, as occasionally happens, then great. But as far as marketing, we mostly just send out announcements and review copies to Mormon-related outlets, and from there we rely on positive reviews and word of mouth.

15B: What do you feel is the future of Mormon letters at this time? Are you following a model provided by other literary co-cultures, say, Judaism?

I don’t see culturally liberal Mormon literature ever breaking out of the ghetto, except for the occasional author who goes national with it, like Brady Udall. Deseret and its clones won’t allow this stuff into the marketplace. Not enough Mormons are interested in reading challenging, realistic stories about their own culture for this field to ever support authors and publishers as a full-time livelihood, in my opinion.

In the past seven years that we’ve been doing Zarahemla, I’ve seen the market get a lot more competitive, with many more small presses and self-publishers than when we started. I think this is good—in fact, I think it’s the only way Mormon letters will keep growing in numbers of titles available, if not in number of copies sold of each title. If authors and publishers keep their expectations low, it can be satisfying to publish on a small scale. And who knows, on rare occasions something might break out and get big sales or even go national, such as Joanna Brooks’s originally self-published memoir Book of Mormon Girl.