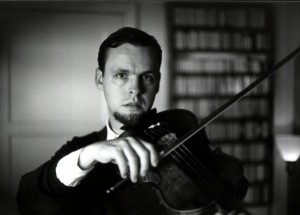 Asplund is a Canadian-American composer-performer based in Utah. He is an associate professor of music at Brigham Young University and extremely active in the Provo music scene. You’ll see him performing with bands such as Fun Coffin, or hosting concerts at Avant gaRAge.

Prior to coming to Utah, he lived in Seattle where he co-founded the Seattle Experimental Opera Company. He has received commissions from many prominent performers and ensembles and has received grants and awards from CalArts Herb Alpert Awards, Genesis Foundation, Barlow Endowment, Artist Trust, King County, Jack Straw Foundation, and ASCAP. His interests include the intersections of text/music, improvisation/composition, and modular textures/forms.

This Sunday 12 Minutes Max will give you the opportunity to meet this composer and hear a recently composed work for cellist and BYU colleague Michelle Kesler. “Suite for Cello” is a six-part virtuoso work. Kesler will perform the final two movements: Interlude and Chaconne. Interlude employs guitar-style fingerpicking and Chaconne uses textures and techniques more commonly associated with the violin.

12 Minutes Max is a monthly showcase of short works and works-in-progress by local artists in many disciplines.  It is modeled after the program originated by On the Boards in Seattle.