Common Ground: 42 Artists Share a Challenge at the UCCC 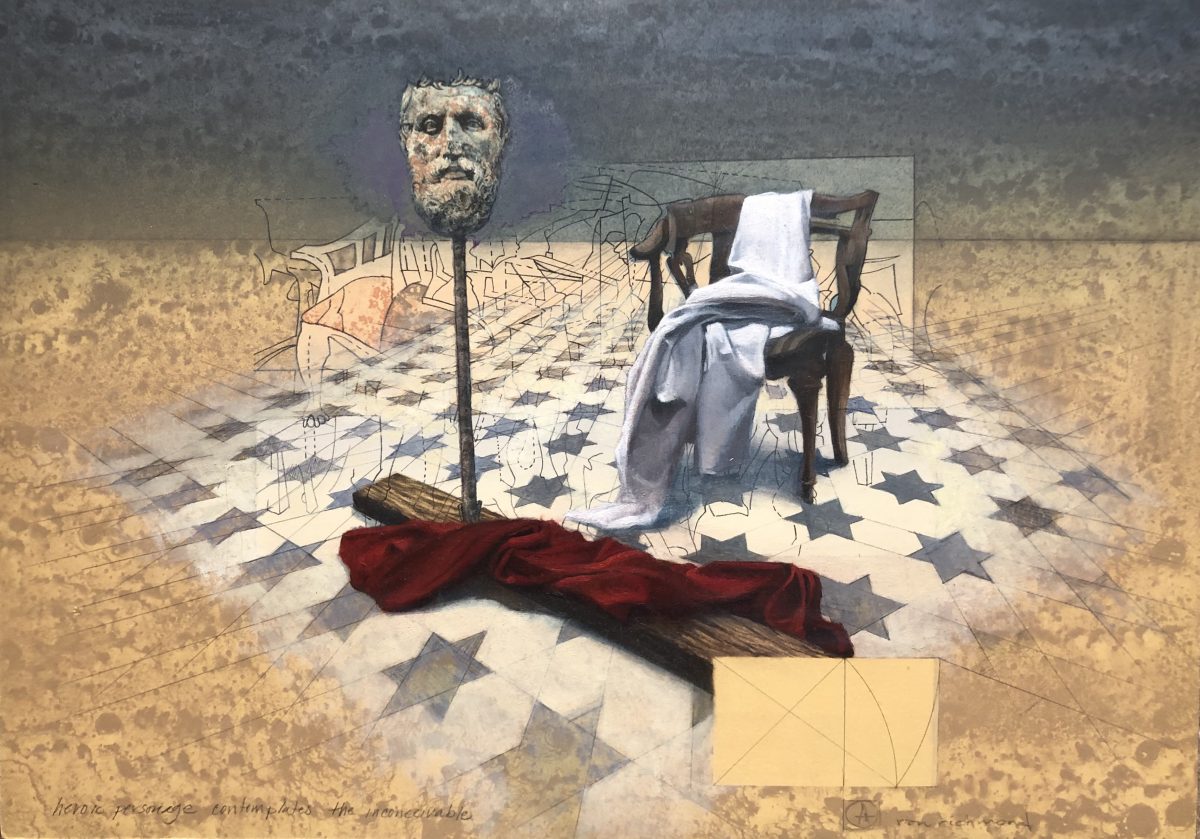 Despite appearances to the contrary, group exhibitions of art are the norm, and should be. A theme, familiar or exotic, or a location, a medium, even a gender can provide the opportunity to compare how different artists handle the same materials: physical, emotional, contextual. From landscapes featuring Mt. Olympus to anything at all to do with the Manti Temple, group shows have made for gracious reminders that our human senses get more out of life when observing what distinguishes one thing from another.

A particularly focused example has been languishing at the Utah Cultural Celebration Center, waiting while the Center’s management struggles valiantly to ensure a pandemic-safe viewing experience. Common Ground originated in a discussion between father and son artists, Wayne and Abe Kimball, who soon involved Namon Bills as curator of the project. They handed out an as-yet unsigned and unreleased edition of a Wayne Kimball print to around four dozen artists, not all from Utah, and asked them to each create a response by whatever means they chose. After they recovered from the shock of being invited to potentially destroy a work of art — an inconceivable sacrilege in many artist’s eyes — some of these artists worked directly with their copy, collaging for real or metaphorically on the actual print; others reproduced the print in another medium and worked with that; a few digested the aesthetic qualities of the original and made something related to it only in their own minds. 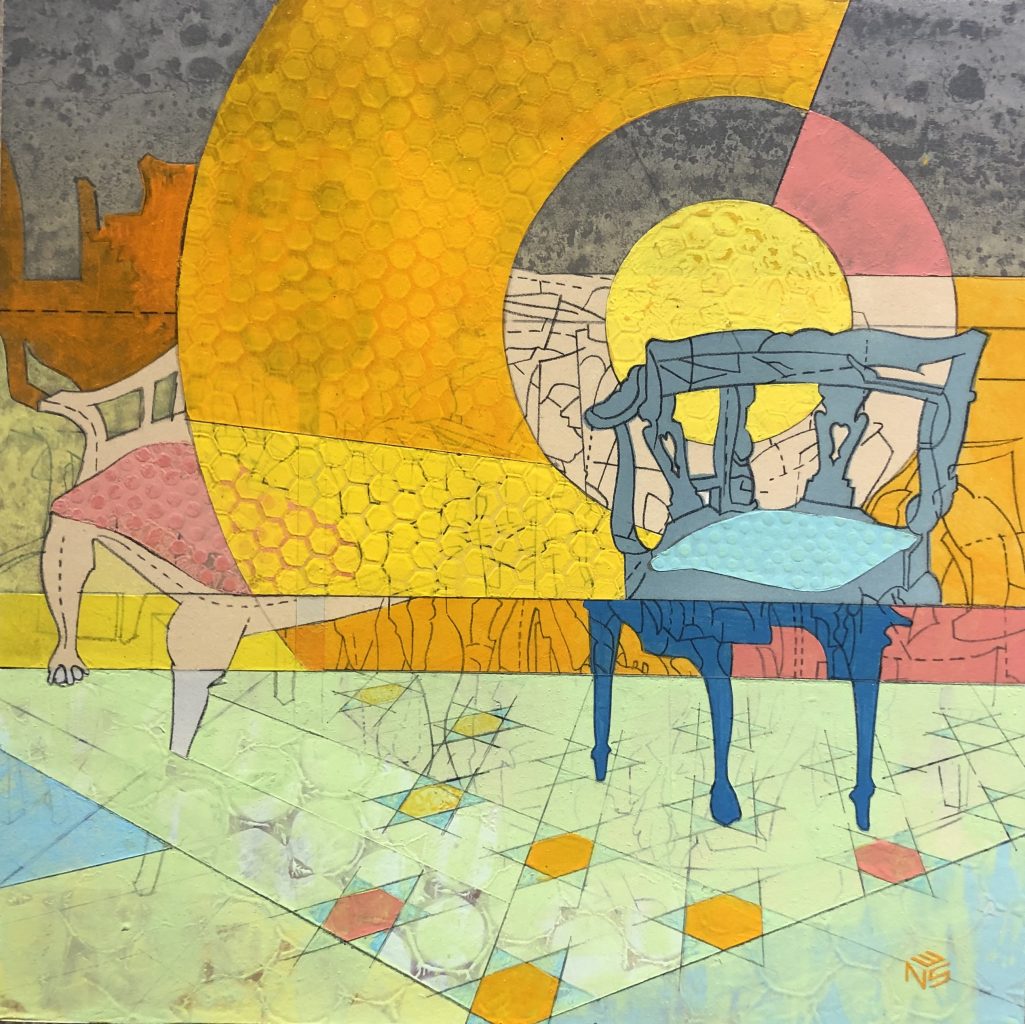 To enter the UCCC’s gallery, which is currently open with Covid tracking procedures in use, feels something like listening to Sergei Rachmaninoff’s immensely popular “Op 43, Rhapsody on a Theme of Paganini,” in which the theme being manipulated isn’t clearly stated until well into the variations. While it’s probably impossible to leave the gallery without a pretty clear idea of what Kimball’s original print looked like, that vision forms in the mind through repeated, often revelatory fragments distributed by the artists on display and collected, like so many pebbles on a beach, by the viewer.

A case of perfect balance between two contributors can be found just inside the entrance, where “Once There Was a Chair” spreads across an L made of low-lying pedestals. Stefanie Dykes (remember, it rhymes with “Yikes”), herself an infinitely versatile master printmaker, has reprinted Kimball’s print on fabric and sewed it into a set of pillows, each with a pocket that holds a lace hanky and envelopes made from hand-written letters. From what can be read of them, they tell stories of encounters with furniture, but the impact of the whole is like a pair of Platonic lovers, one of which planted a seed in the other, who supplied the necessary skills and materials to bring forth these offspring. Or, for the more austerely-minded, here are a set of thematic pillows to incline upon while reading the messages cleverly placed in their pockets. It all belongs at the entrance, where it offers its own gateway into an experience as rich as a novel or a book of poems, read by firelight on a winter’s day. 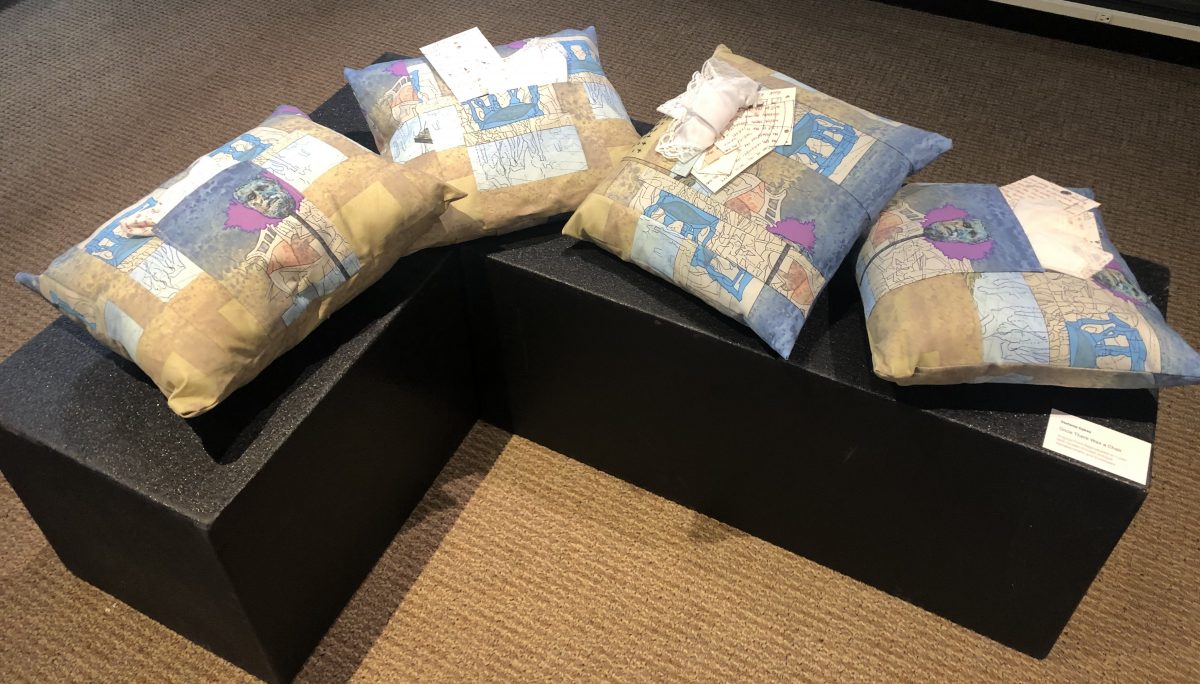 Stefanie Dykes, “Once There Was a Chair” 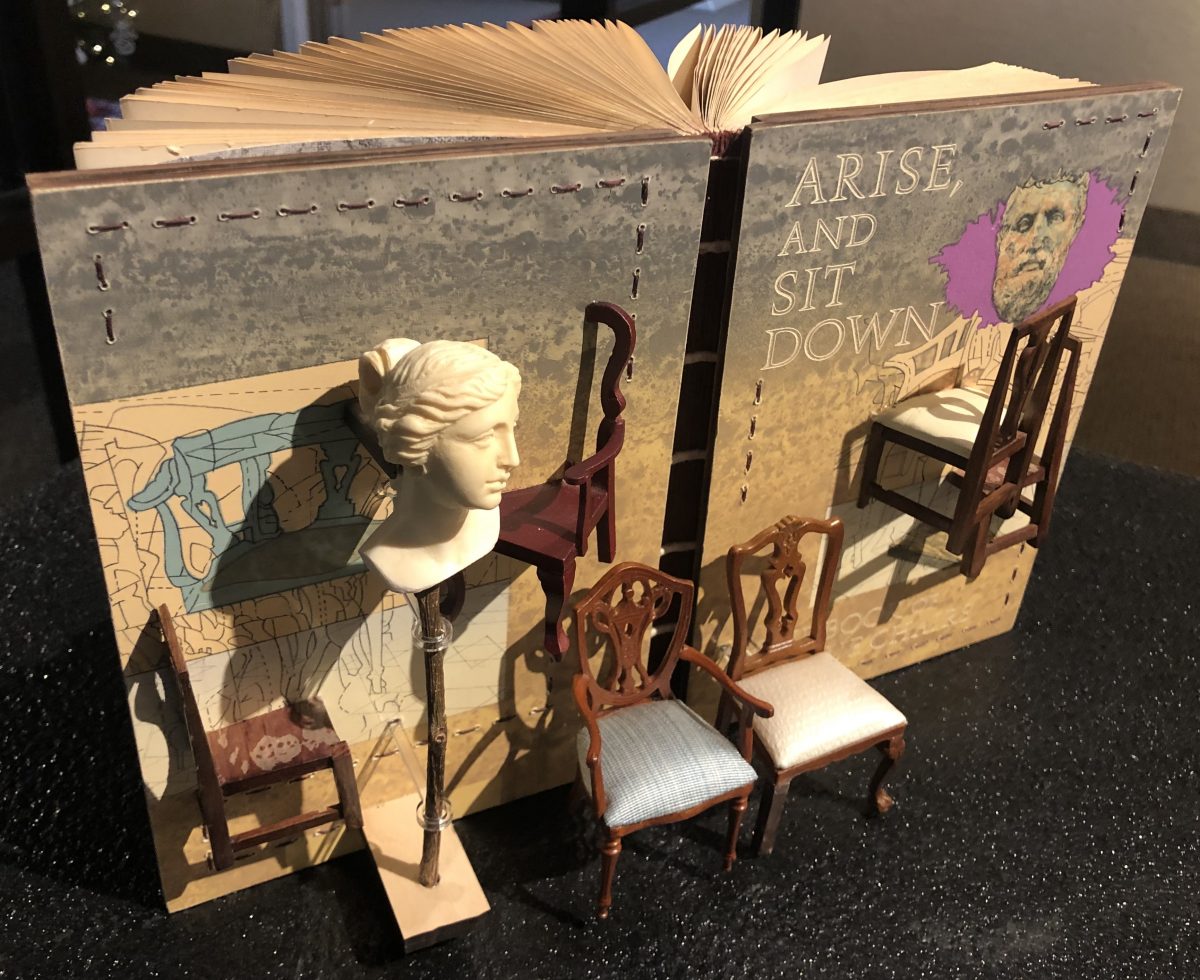 Chris McAfee, “Arise and Sit Down”

Another conversion between mediums takes place in Chris McAfee’s “Arise and Sit Down.” This magical artist’s book, which recalls the child’s fascination and the adult’s delight in miniature worlds, foregrounds one of the two images central to the original. While artists are usually associated in the popular mind with easels, exposure proves that the most important piece of furniture in art is the chair. Kimball’s chair, as many of the works in Common Ground emphasize, is something of an advanced Cubist composition, and McAfee’s reworking of a bound history of chairs brings Kimball’s chair into the third dimension — or, like all sculpture, into the room with the viewer. 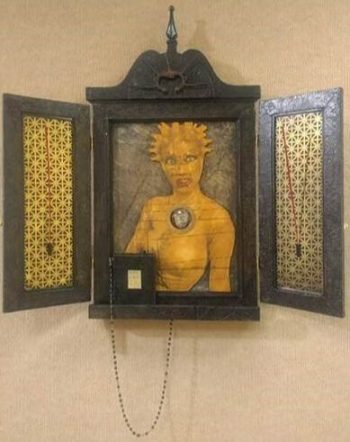 An alternative take on Kimball’s chair’s presentation is found in the most compound piece here, Zane Anderson’s “Suckling de Corona,” in which the ambiguity between the Cubist-like original and a putative pattern for conceiving of a chair becomes the grounds for one of Anderson’s signature extravaganzas. He likes to cover his somber intentions with humor, an impish layer of playfully deadpan sadomasochism, no doubt as a way of distancing himself from his more sincere impulses, and here he achieves a more nuanced balance between the two. Working in a reclaimed wooden triptych, on top of a Butterick sewing pattern, he takes his cue, as does Caleg Meurer in his delightful, masterful digital video “Creation of Man,” from the battered condition of Kimball’s Greek head and the corona of disintegration surrounding his chair. Anderson has appended a small book of collaged material, attached by a length of chain, that for those who get past the not-really-shocking encounter with the primary, mirror-like image, offers some visual and verbal poetry in compensation for having to live in such a chaotic, insufficiently comforting world.

So it continues: wander among the forty-some transformations, then stand in front of any one and it will reward contemplation. With “In All Cases Alike,” the too-seldom seen Adrian van Suchtelen foregrounds an aubergine, a persimmon, a moth, and a note from D’Arcy Wentworth Thompson’s On Growth and Form before a succession of Modern Art examples, in which context Kimball’s are two of the exhibits that help to show how the forms of all things come about in ways that reveal the “forces” (or influences) that have acted on them. 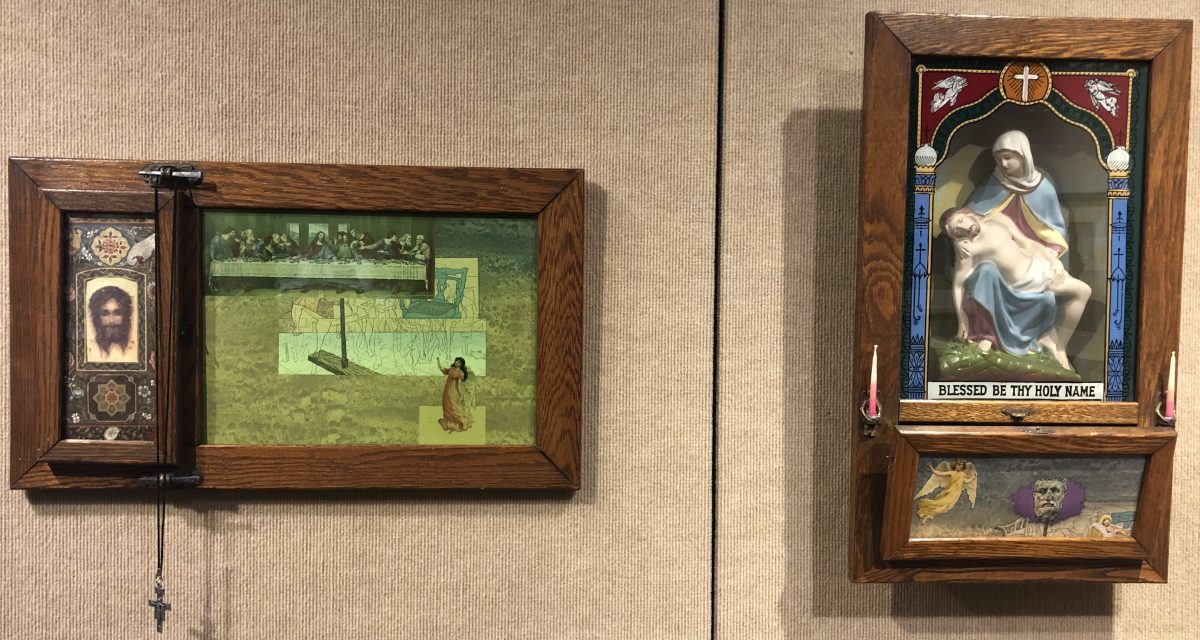 Frank McEntire, “Diptych: ‘Holy Name’ Found Me In Ogden On a Sunny Day”

We could probably use a word for the American version of assemblage art. Scavenging? Assembling? Kienholzing? A couple of familiar practitioners here denote the point where Kimball as muse begins to fade into the background, sometimes literally and at others times more sublimially. In “Diptych: ‘Holy Name’ Found Me In Ogden On a Sunny Day,” Frank McEntire reveals and revels in the collage-like quality of many church interiors, where sincerity prohibits tossing out anything besides dead flowers, and one memorial fixture often has to overlap with another. While his piece of Kimball fights for its primacy, Vince Mattina’s gets lost behind a seemingly inevitable image: Magritte’s tobacco pipe blowing bubbles, in this case made of clock faces, the whole labeled “This Is a Pipe.” 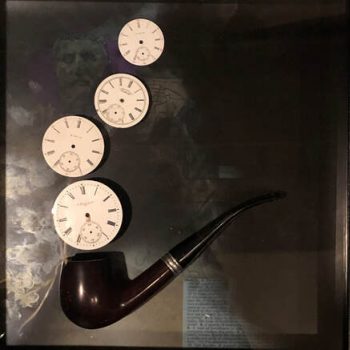 Vince Mattina, “This is a Pipe”

Before plunging into the more freely, even roughly handled versions, it might reassure those who still think this a display of disrespect to consider Wayne Kimball’s own transformation of his print: his second thoughts, if not third or fourth. Art is all about the coincidence of representation and re-presentation, and Kimball’s “Somewhat Heroic Personages” appears to make a case for restoring the “noseless stone head” to a leading role, here among so many efforts to advance the cause of the chair. Loren Brown’s pair of collages, “The Philosopher’s Garden,” on the other hand, completely replaces Kimball’s head and chair with parallel examples from other lives. Ron Richmond, who spotted the presence of two of his favorite elements — the raw plank that supports the head echoing the rude wood of the cross, and the chair serving as support for his bolts of red or white cloth, turns Kimball’s composition into one of his own.

There are many examples of an artist’s creation becoming a household image, but Leonardo and Vincent never got to see “Mona Lisa” or “Sunflowers” proliferate in their lifetimes the way they have since. It must be something else for Wayne Kimball to see his beloved icons reproduced in so many intriguing and satisfying forms. Meanwhile, returning eventually to the passageway, we find Emily Wilson’s accordion-folded book: “Over, Under, Around, and Through,” which provides a fitting farewell in its evocation of a road to travel upon and the sights it offers. Wayne, Abe, and Namon deserve credit and thanks for pulling this cerebrally AND emotionally gratifying roomful of art together, and the Utah Cultural Celebration Center for supporting and fighting for it. 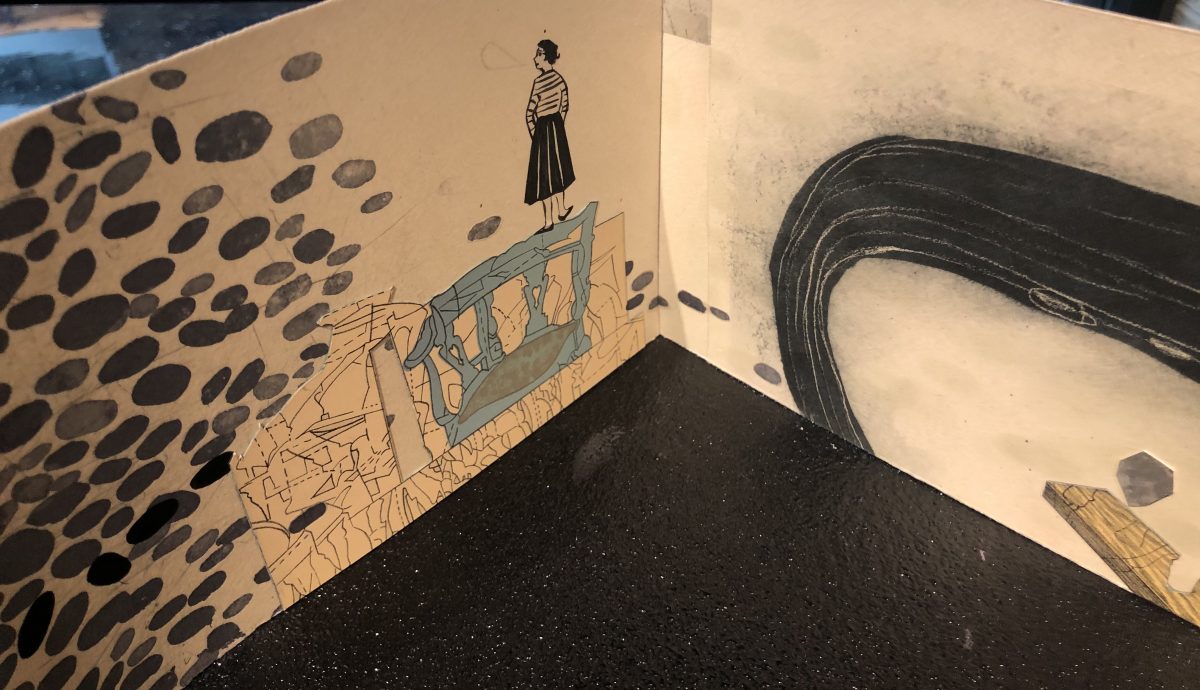 Emily Wilson, “Over, Under, Around, and Through”