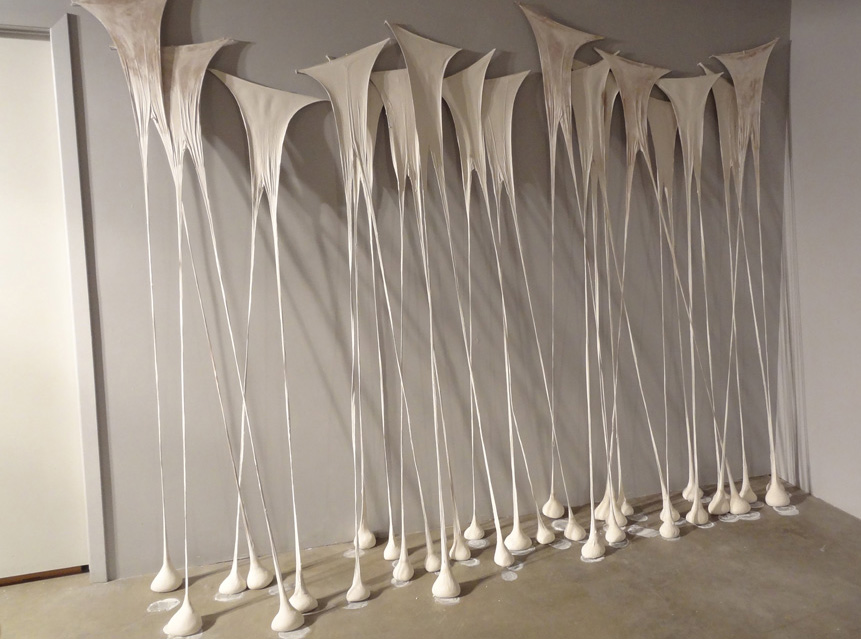 The problem with contemporary art, post-modern art, call it what temporary label you will, the problem with new art is always that it doesn’t look like art. Two of the signature schools of late modernism—found art and assemblage—exemplify this dilemma. How can a jumble, not just of familiar stuff, but of familiar junk, be art? Yet some of the finest intellectual and deepest emotional connections to be made in galleries in recent decades have come from just such junkyard plundering. One way to make it new is to add some novelty to an already existing mode. The other is to make the novelty into a mode of its own. Colour Maisch, in a ramshackle warehouse-full of untitled and indiscriminate works currently at Nox Contemporary, does both.

15 Bytes previewed Maisch’s works in the June issue, but when, standing outside the gallery at the opening, I shared our anticipation of some of what we’d seen then, the artist blushed and stammered that the work I’d mentioned “might not be in the show.” That in fact it wasn’t came as no surprise, given her extreme position on the radical end of the scale that runs from reliable, if predictable artists on one end, to those whose studio experiments keep even them guessing, right up until the opening, at the other. Indeed, anyone who has been privileged to spend time in the sanctum of an artist’s studio knows that some of the most interesting things to be seen there never make it to the gallery. Wet clay, one of the more fascinating items on Maisch’s palette, has a life span of mere hours, followed by days looking like leather. Observing its behavior as it dries, and seeking ways to permanently exploit what she finds, are part of this artist’s unique and unconventional approach. On another scale, the one that extends from pure object making to pure art making, she tends to favor the art—the process and the idea—and let the objects fall where they may.

One staple technique that survives from her show at Finch Lane three years ago is infusing a pre-existing, flammable object with porcelain slip, turning the object into a matrix that is then burned out, leaving behind a variously uncanny, bone-like image of itself. A large example at Nox looks like driftwood, like the flotsam one might find on the beach after a storm, only purified the way fossilizing purifies living tissue into pristine stone.|2| Others suggest honeycombs, including one group tinted black except along the plane of their top surfaces, then juxtaposed on a table to suggest a vanished continuity or configuration.|3| Elsewhere, some works appear to have been created on-site, like the enormously long-legged creatures stalking along the back wall, lifeforms whose witty DNA includes panty-hose and liquefied clay, and which poise on the brink: they might be merely funny if they didn’t evoke something alive, alien, and provocative.|1| Mystery is as much a part of Maisch’s art as clay, though her palpable enthusiasm for what she discovers relieves viewers of the discomfort such bizarre life-forms might engender under more ambivalent circumstances.

Maisch has taken some chances here, utilizing unconventional materials like fabric hoses, scientific glassware, and discarded furniture. By and large, she makes it work for her, like the scaffolding of chairs that are an obviously essential part of the nonetheless irrational machine that extends across much of the gallery floor. But for me, the best work is the hand-built, almost conventional vessels with their inexplicable contents and inscrutable uses.|4| The bifurcating tubes, hung haphazardly from nails on the wall, are also familiar from Finch Lane, but have acquired a calligraphic dimension here.|5| Some simple porcelain cups sag beneath their own weight, as though their contents were the only thing holding them up. Here and everywhere, metaphors are for the taking.

In the outer room, a video and seven drawings raise a dilemma.|6-7|One wonders: do these two-dimensional avatars of the sculptures precede them, follow them and distill what she discovers making them, or do they come into being independently? Perhaps they’re just here to prove the artist’s versatility. Another way to do that for yourself is to go slowly through a display so rich that it tempts rushing from this wonder to that marvel. But unless an effort is made to take time, something will be missed. That sack of clay that resembles a cheese, or a head of garlic, a root vegetable, or a bit of anatomy; the meniscus-like forms wherein wax is both cup and contents; the lumpy, freestanding, discarded skin deposited on the corner of the pedestal. Colour Maisch sets something in motion, then puts something in place to capture it, then invites viewers to examine the result with her. In the process, she liberates imaginations: her own and the viewers’, alike.

The Soft Animal of Your Body, new works by Colour Maisch, is at Nox Contemporary through July 19. This will be the gallery’s last exhibit.