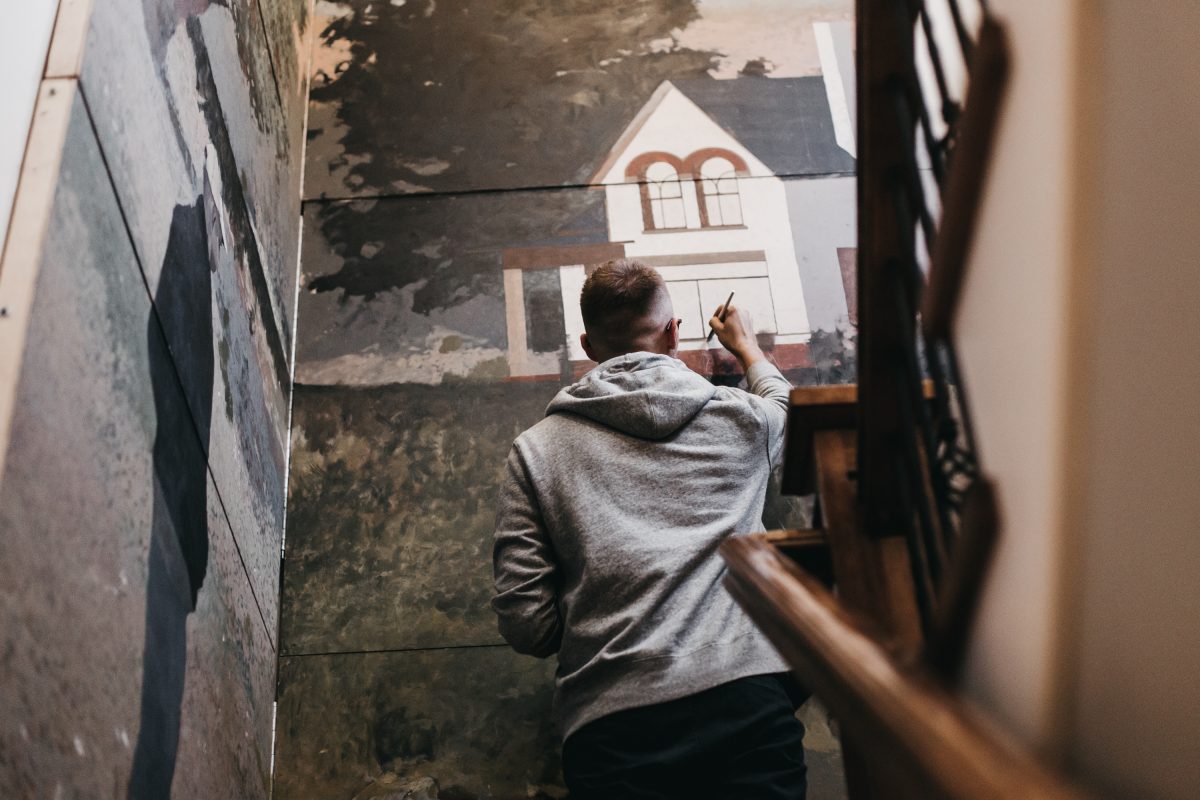 Colby Sanford works on a commissioned work in a collector’s stairwell. Photo by Tacie Hoffman.

From fishing in streams and running with cousins, flying high on a swing or laying under the trees, childhood memories play an important role in the paintings of Colby Sanford. His most recent explorations focus extensively on memory and its metamorphosis in our minds to become something particularly delicate and idyllic, while remaining potent and powerful. The setting for these works is his grandparents’ farm in Maine, where he recently spent several months sketching and exploring concepts for his first solo exhibition at Meyer Gallery. His current project is as much about exploring how time has affected his memories, he says, as it is capturing moments of his childhood to share with his 2 1/2-year-old daughter, Faye, when she is older. 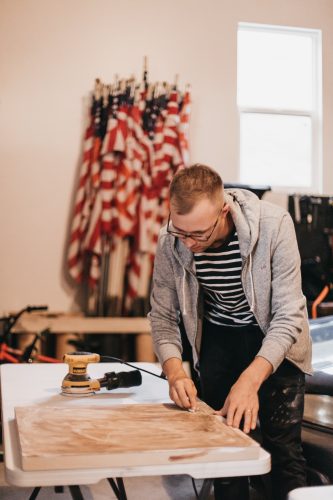 Sanford is in his late 20s with light brown hair, glasses, and an introspective air. He is articulate, but occasionally becomes distracted when particularly excited. Near the easel in his studio sits a container of dark chocolate peanut butter cups, several small mockup paintings, and wooden blocks previously used as palettes, now dried with thick layers of oil paint. Lined up against the walls are numerous paintings, all waiting for their finishing touches before being sent to the Park City gallery. The paintings consider the past as it was, but also the reinterpretation of childhood experience into idealic, homey, complex scenes of interaction between figures and their wildly green environment.

“My grandparents always had the dream to live off the land and make a sustainable life for themselves,” he explains. “So, in the summer of 1973 they left their life in Connecticut and bought 100 acres of land in Maine.” After living their dream life for more than 40 years, however, Sanford’s grandparents are looking to sell the property and move near family. “I think they’re looking for something a little more manageable,” Sanford says. “My grandpa is 85 and my grandma is 76. I wanted to get out there to paint before that opportunity was gone and be with them there in that setting.” 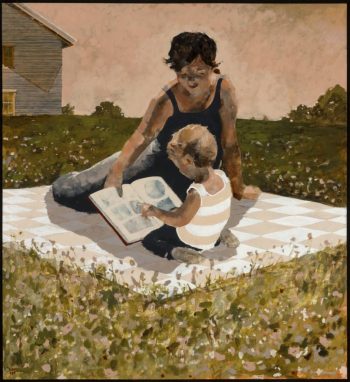 Sanford wanted to revisit and explore the farm before it was sold. He also wanted to resolve the conflict he noticed about his recollections of Maine. He had spent summers there while growing up, and felt that there was a discrepancy between his memories and the actual farm. “In my head, it’s almost like there are two Maines, one in my head and another one currently happening. I went out there knowing that I wanted to actually experience Maine,” he says. Rather than staying on the farm, Sanford and his family lived about 20 minutes away, enough of a remove that he felt he could experience Maine without getting too wrapped up in family memories.

Sanford grew up in Provo, in an unconventional household where his parents encouraged his creativity. They allowed him to paint on the wall of his bedroom and stay up as late as he wanted. In high school, Sanford took all the art classes he could, including ceramics. After graduating, he served an LDS mission in Taiwan, which sparked his interest in Chinese language and culture. When he returned, he married Alicia Sheffield, and two weeks later left for a job he had found in China overseeing a division of Rimports, a ceramics factory which manufactures Scentsationals, a type of wickless candle. “They needed someone who understood ceramics and spoke Chinese. It was one of those moments where I was qualified and it was available, so it worked out,” Sanford explains.

“Nap by the Window”

The Sanfords enjoyed their two years in China, but he says it could be profoundly lonely. “It was a really rural area, maybe around 5,000 people, no other foreigners.” But this was also helpful for his artwork. “There really wasn’t much for me to do but go home and paint after work.” By the time they returned to Utah, Sanford was selling paintings online and had to decide what to do next. “I had a conversation with a few people, including Brad Kramer [of Writ & Vision gallery], trying to decide what route to take. I could either continue as I was and focus solely on painting, or I could go back to school and study fine art.”

Enrolled at BYU, Colby never lost sight of his ultimate goal. “My painting was always more important than school for me,” he says. “If there was a paper and a painting due at the same time, I would do the minimal effort I could on the paper to get a good grade, but focus the majority of my time on painting.” Upon completing his BFA, Sanford didn’t even invite his family to his BFA show, saying, “the academic wasn’t ever first to me. My sister was like, “Your BFA show? That’s huge! Why didn’t you invite me?’” Sanford laughs: “Honestly, the Meyer Gallery show feels like a much bigger deal to me. It feels like a more decisive beginning to my career, like I’m more of an adult.”

Colby’s work is characterized by strong lines, textured surfaces and a reduced color palette —raw sienna, burnt sienna, black, and white. He has shown some landscapes, and works with spiritual and religious connotations, but his main subjects are familial and intimate: husband and wife, parent and child, siblings, frequently centered around a shared activity like eating, reading, or playing the piano.

The Meyer show is a continuation of his aesthetic exploration, with some shifts. “I wanted to include some sort of idealized geometry in this show,” he says. “I read “Elements of Dynamic Symmetry” a while ago, recommended to me by Peter Everett. In that book, it discusses different ratios found in nature which are particularly important to design.” Sanford believes that this type of geometry is necessary to fully communicate his feelings about Maine. “The place is romantic, but it’s also up on a pedestal. It’s so idyllic to me that sacred geometry seemed the perfect way to represent it.” 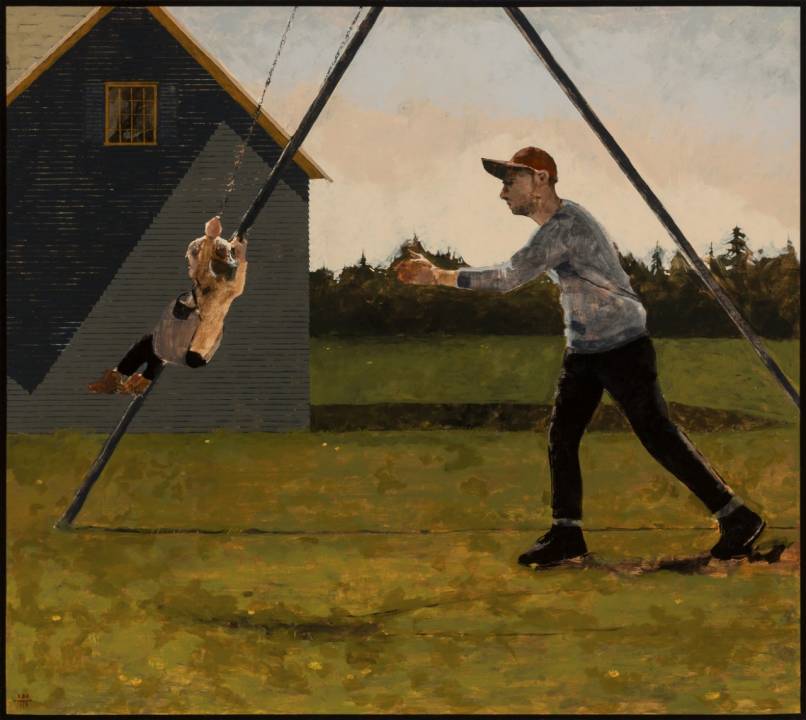 Sanford has always believed in making his own frames, working with his father for earlier shows. This time, however, he worked with Michael Scheetz, his old Boy Scout leader, who is an accomplished woodworker generally creating fine coffins. The instructions for his frames are particular: every frame is made from an inch walnut with a quarter-inch maple spline. Occasionally there are knots in the pieces of wood, creating visually arresting textures. The frames fit with the color palette, bringing in a rustic feeling that fits with a farm life in rural Maine. 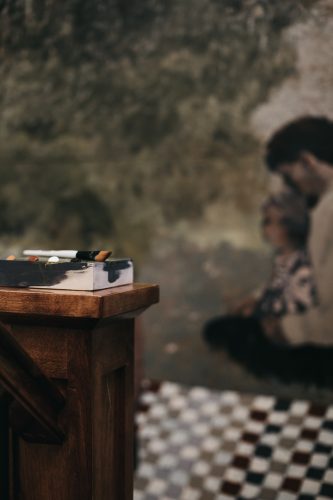 Sanford relished the chance to paint a different landscape than what he saw every day in Utah. Particularly challenging about painting Maine, however, was the variety and quantity of greenery. “When I got to Maine, I saw the green is different there,” he explains. Behind his grandparents’ house is a large cow pasture. There haven’t been cows there for years, but the grass is still kept pretty short and neat. “You have to keep it low, or in a few years, the forest will just cover it back up and reclaim the land.” In Maine, “the green will encroach on the pasture. If you don’t do anything, it will take over,” he says. As part of learning about this new environment Sanford did several “greener grass studies” where he focused on painting the thick, vibrant Maine vegetation. The green, he decided, really was greener in Maine after all.

Though Sanford uses the word encroach when he speaks about the greens in his paintings, he doesn’t see it as a negative or threatening force. “The green is really alive. There’s something to it. In Utah, we struggle to bring life from the ground. We have sprinklers, irrigation. In Maine, the green is like life. It grows everywhere,” he says. The greenery becomes almost like a secondary character in Sanford’s paintings. Expansive layers of grassy brushstrokes surround the figures, especially in “As the Sky Goes By,” where two figures lay on the grass, heads touching, looking at the clouds. The vegetation around them covers their bodies slightly, outlining the forms in a soft green cloud, but it is not overwhelming or threatening. 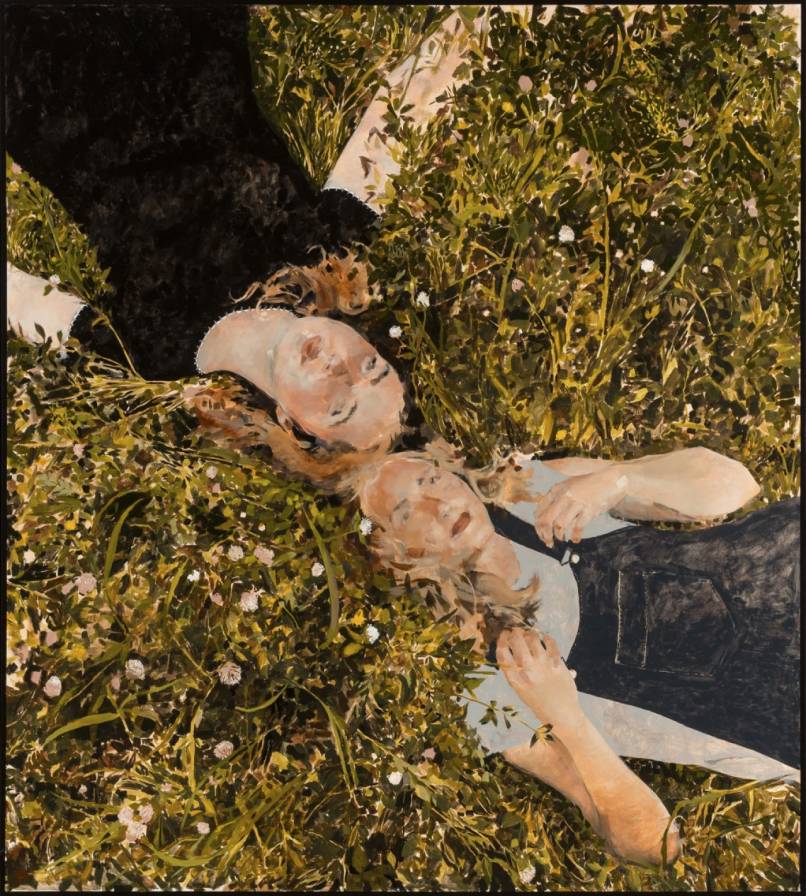 On top of finding new greens in painting, this show is the first time Sanford has really pursued outdoor settings. “This show is different than anything I’ve ever done. Usually I would do indoor scenes, but this entire show is based outside. I was kind of self-conscious about painting outdoor scenes, but it’s added a whole new dimension to work with in my paintings,” he says. 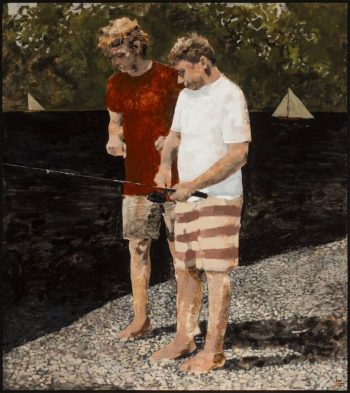 Sanford always had a strong affinity for the outdoors. In high school, his family built a yurt in the backyard, where he had a sleepover for his birthday. Afterwards, he found himself spending more time there, eventually using it as his bedroom and turning his room in the house into a studio. One of the main benefits, though, was that outside Sanford didn’t have to worry about being noisy. “I could play my guitar as loud as I wanted without waking up my family,” he remembers.

His kinship with outdoor spaces is evident in his paintings. The soft colors and textures of the greens create a powerful juxtaposition with the rigid, defined forms of the home in the background of many pieces. “The show is called ‘Remembering Home,’ and in these paintings I wanted to have some sort of home,” Sanford explains. It is only recently that Sanford says he has really felt like an adult. By establishing his life, his family, and his career he finally has a sense of home coming together. 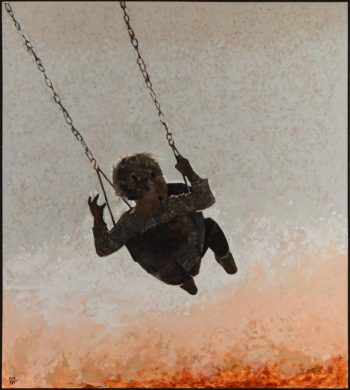 Next, Sanford wants to get a piece of his own land, a place to roam around and feel at home. Currently living near BYU, he hasn’t had as much opportunity. “It’s not like I’m going camping all the time, but I love being outside in the fresh air. There’s something different about having land, knowing that it is mine, my space, my home. It feels different than being in a park or a public space to have an area of your own.”

At one point he thought of taking over his grandparent’s property, but ultimately decided that wasn’t really his dream. It was their truest ambition, but not his. Instead, Sanford hopes to have a painting career where he can spend time with his daughter and see her grow up. Fatherhood is an important part to all of his paintings, inspired by his experiences with his father and grandfather. The connections of family are another way that Sanford explores home, representing familial relationships in the memories depicted in his paintings. As his Meyer Gallery show demonstrates, his work explores the major themes that have impacted his life: family, outdoor space, and finding one’s place. He depicts scenes precious to him, where memory and paint come together to create images that reflect on the passage of time, growing up, and memories of childhood. 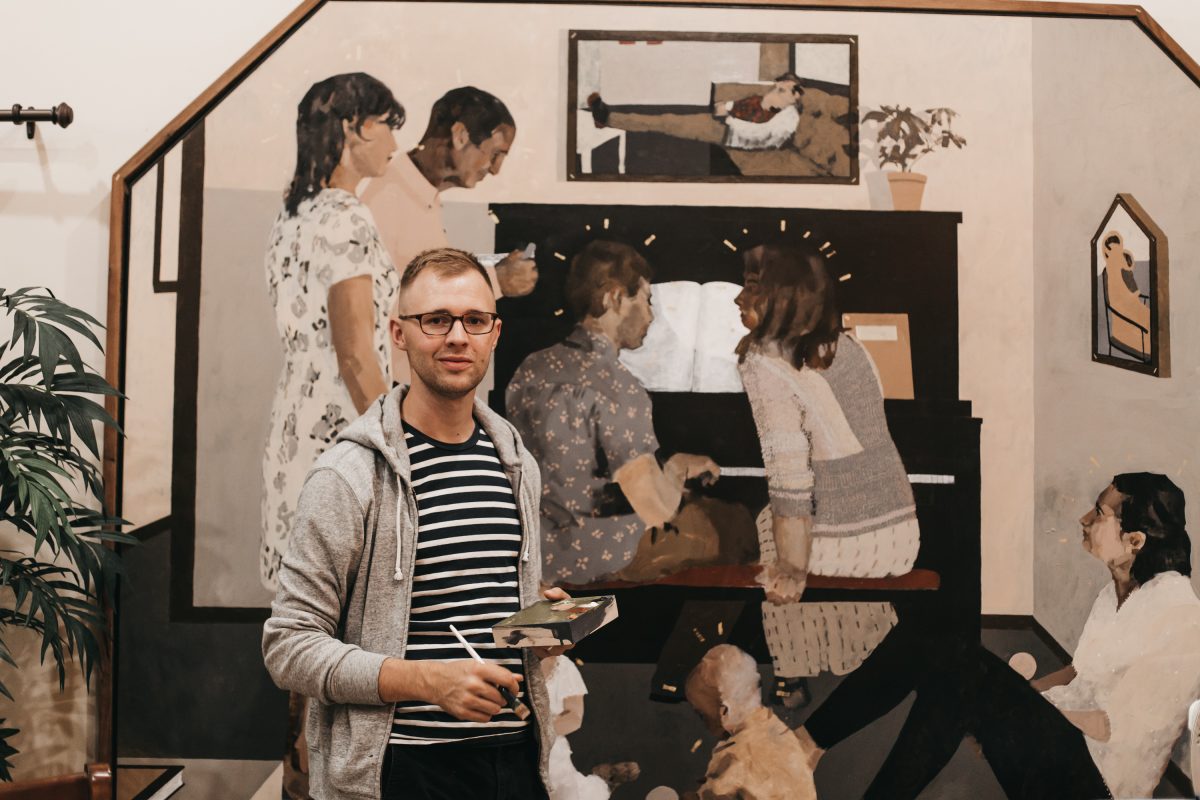