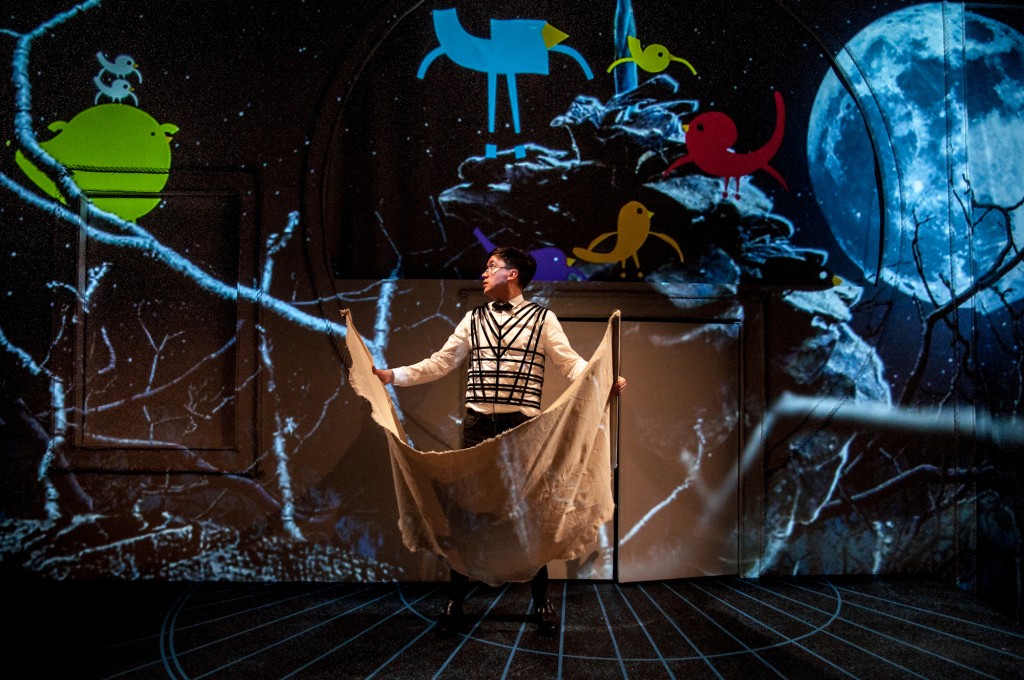 A dynamic creative team brings a storybook to life in the theatrical production of Climbing with Tigers. Photo by Caitlin Blue.

Picture a young child coloring: they smile in delight at picking out just the right crayon or enthusiastically grab a random one from the floor; they fill the page with broad strokes of vibrant color without any regard for the lines (assuming there are any); and an infectious sense of uninhibited glee brightens their eyes because they know that with just a little magic, the pictures they create can become an entire world of their own making, where epic adventure awaits. For a child’s imagination has unmistakable power—just ask 9-year-old Nathan Glad, a sweet-natured little boy with Osteogenesis Imperfecta (or brittle bones disease), whose dreams of becoming stronger inspired a book he helped to co-create and which has now been brought to life, illustrations and all, as a hero’s journey for the stage in the world premiere of Climbing with Tigers.

Published in 2014, Climbing with Tigers is the first in a series of books from the Red Fred Project, the brainchild of author, designer and illustrator Dallas Graham, who hopes to create 50 books with 50 critically ill children from all 50 states, the proceeds going to help pay the child’s medical expenses. The books feature stories developed by the children and illustrations by Graham—including photographic backdrops and Graham’s iconic cast of bird characters, “Red Fred and The Jolly Troop,” made from a series of exaggerated punctuation marks.

The project’s first collaborator was young Nathan, an authority on facing challenges, who with Graham’s help created a charming, whimsical story about overcoming obstacles. Climbing with Tigers is a tale about a bird named Blue who, because he has fragile bones, won’t venture away from his tree until a chance encounter with The Jolly Troop changes everything. With help from his adventurous new friends, Blue learns that frightening dragons and roaring tigers are not always what they seem and because his dream of being able to fly is more formidable than his fears, he ultimately conquers great challenges.

Like Blue, Graham is a dreamer, always searching for more. So he wasn’t content just to bring Glad’s story to the printed page. After the successful launch of the book, he approached his longtime friend Robert Scott Smith to see if his Flying Bobcat Theatrical Laboratory would adapt Climbing with Tigers for the stage. Smith and co-founder/co-artistic director Alexandra Harbold have always been eager for new opportunities to spiritedly explore uncharted territory and leaped at the opportunity. They almost immediately added writer, director, and actor Troy Deutsch to their Jolly Troop. The New York City-based Deutsch has proven chops as a playwright—his work has been shown in cities around the world, and he’s written stage productions for more than a decade—and Smith has known him for 15 years, since he wrote his first play. With Harbold as director, Smith as lead and Deutsch as playwright, the troupe came up with several rousing ideas on how to bring life to the stage adaptation of Climbing with Tigers.

After the first workshop, Harbold said it was clear that to execute the project it needed a professional theater, and with her fond ties to Salt Lake Acting Company (SLAC), where she saw her first professional play, landed her first professional acting job, and has directed numerous productions – she couldn’t imagine producing Climbing with Tigers anywhere other than the theater she thinks of as home.

The creative team knew right away they wanted to explore the possibility of using animations and projections so the play would have a visual resonance with the illustrated book. “As a company, Flying Bobcat has been drawn to use video in our work and felt like this was another opportunity to push our boundaries into unknown territory. I gave Troy some ideas and concepts and possibilities, and he came back with a beautiful adaptation and a visual language that was inspiring,” Smith says.

Ideas weren’t enough, however, and the adventuring trio reached a stopping point in the road because they needed to find a skilled craftsman adept at creating digital art and animation. Enter Jarom Neumann, whose artistic abilities gave the gang the power to forge ahead into unfamiliar terrain. Smith said that without Neumann they couldn’t have accomplished their vision to give Graham’s playful jumble of photography and graphic design a life of its own. As with many Flying Bobcat productions, the visuals are just as much a character on the stage as the actors (Smith in a variety of roles, including a moonwalking, opera-singing narrator, and Austin Archer as the intrepid Blue). Stylized photographic images create the backdrops—a backyard tree, a rundown barn, the mysterious rosewood forest and the moonlit tree of Thunder Tiger—where Graham’s motley crew of animated punctuation come to life. To accompany Neumann’s images, dynamic music and sound have been added by composer Kevin Matie and sound designer Adam Day, submerging the actors into a new realm. And Thomas George has created an inventive stage, with multiple entrances and compartments that blur the lines between the two- and three-dimensional worlds, creating a pop-up book effect.

Harbold describes the world created onstage as “high-tech and raw magic fused in live performance,” which is an expression of the story that sprouted in Nathan’s young, fertile imagination during his collaboration with Graham. Harbold used Nathan as guidance while the creative team discovered how to nurture his vision and help it to grow into a multi-layered production. “Climbing with Tigers is a hero’s journey for Blue; trying to imagine what would surprise, delight, and resonate with Nathan has been our compass as we’ve created the show,” she says. The creative team delivered on this goal, and Harbold says she feels a tremendous amount of gratitude to be on this excursion with a gifted group of people. “Each design element of the world is idiosyncratic and exquisite. The production mixes graphics and technological artistry in with handcrafted design.” It’s rich enough to hold the attention of any adult and gripping enough to keep the kids in their seats.

In the end, the team was victorious because they succeeded by using their comradery to fashion a theatrical production out of multiple layers that explored: Nathan’s desire to be stronger, the book he created with Graham about overcoming obstacles, and the search for the right tools to allow an audience to be invited along on a quest in a world created by the power of a little boy’s imagination.