Christo & Jeanne-Claude at the Kimball 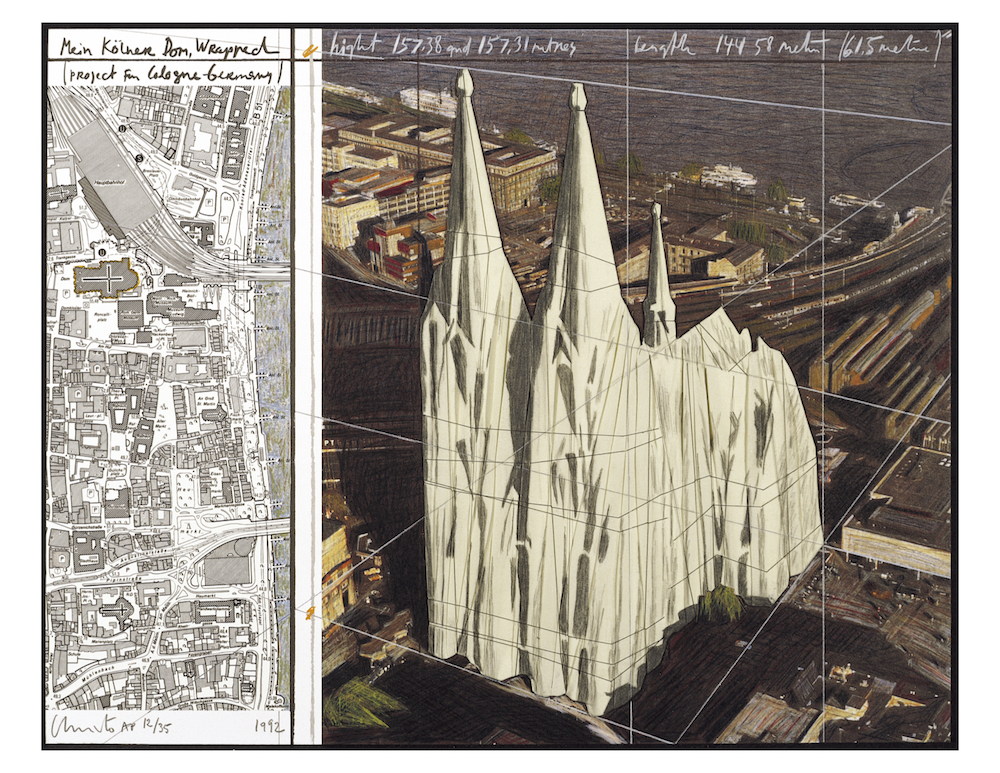 The Kimball Art Center in Park City, Utah is the recipient of a traveling exhibition composed of over 130 drawings, sculptures, collages, photographs and original artworks by the world famous husband and wife artistic team Christo and Jeanne-Claude. Initially organized by the Sonoma County Museum in Santa Rosa, CA, from the private collection of Tom Golden, the compilation is regarded as ‘the largest U.S. collection of Christo and Jeanne-Claude’s original’ works.

At the age of 79, Christo continues to work as one half of the legendary duo that began creating artworks in the late 1950’s. Jeanne-Claude died in 2009 of complications from a brain aneurism, leaving her husband to continue their legacy through a variety of unfinished projects.

Known primarily for their colossal earthworks and public installations, Christo and Jeanne-Claude are regarded as much for their artworks as for the long, complicated process of making them. Despite projects that have taken decades to complete, the duo is responsible for a number of iconic works including “Running Fence” (1976), a 24.5 mile nylon fence spread across both public and private land in Sonoma County, California and “Wrapped Reichstag” (1995) which consisted of wrapping the German parliament building in polypropylene fabric between June 24th and July 7th of that year.

Unlike other famous earthworks in the Land Art canon, Christo and Jeanne-Claude create temporal pieces that often require years to plan and remain in place for only a short amount of time. As such, the preparatory sketches, notes, photographs, films and correspondences are the only evidence that remain as a testament to the unique process used to create these iconic artworks. Remarkably, it is through the sale of such items, that Christo and Jeanne-Claude have traditionally paid for their immense projects.

The legendary documentary filmmaker Albert Maysels famously directed four films featuring the duo, Christo’s Valley Curtain (1974), Running Fence (1977) Umbrellas (1994) and The Gates (2007). These films capture the frustration and determination intrinsic to the massive undertaking of public art. Throughout their long career, the duo faced numerous legal, environmental and political battles that tested their determination to complete each of their projects. Maysles remarkably captures the process that accompanies the creation of these projects, inviting the viewer to consider the progression leading up to the final product as a conceptual artwork in itself.

As the most recent of these four iconic documentaries, The Gates (2007) documents what was lauded in the press as “New York City’s largest public art project.” The conception for the project began as early as 1979, and was finally erected on February 12, 2005. Like many of Christo and Jeanne-Claude’s works, the Gates was considered site-specific—situated in a location chosen for its significance. Placed in Manhattan’s iconic Central Park, the project consisted of 7, 503 orange-colored fabric gates littered throughout the park. To accompany the exhibition, Maysles’ documentary was screened at the Kimball Art Center on November 20, 2014.

Kimball’s exhibition devotes considerable attention to the presentation of documentary material—the extensive drawings, maps and correspondences that accompanied the duo’s many public projects. This assortment works as a companion to Christo and Jeanne-Claude’s most famous works, providing a skeletal structure for what the public was only able to witnesse in its final form. What makes this collection significant, however, is the inclusion of original artworks that are no doubt influenced, but are in fact wholly separate from the large-scale projects. The arduous development of public installations coincides with the carefully precise aesthetic of a series of hand colored lithographs and ‘wrapped’ sculptures. In a depiction of a Parisian newspaper wrapped in polyethylene and rope entitled, “The Paris Review Wrapped” (1985), Christo creates a mixed media lithograph with viable textures and an intriguing surface. Similarly, three sculptures placed in a horizontal row, dissect the gallery space and add variety to the works of the two-dimensional majority. One such sculpture is “Wrapped Flowers” (1993), a collection of artificial flowers wrapped in Christo’s signature polyethylene. The infatuation with this material is understandable in its reflective properties, allowing the viewer to detect, in a translucent manner, the ghostly forms that lurk beneath. Such original works shed light on the often forgotten, yet immensely rich, work from the Christo and Jeanne-Claude canon.

The Kimball Art Center is located at 638 Park Ave. in Park City, UT. This exhibition is presented by Larry and Judy Brownstein and the Swartz Foundation. It runs from November 1, 2014-January 4, 2015.