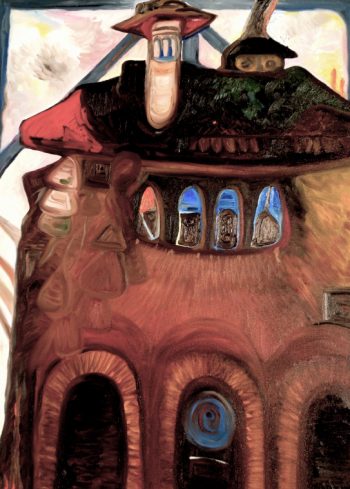 Is Expressionism dead in the age of conceptual new media? Salt Lake City artist Rebecca Pyle suggests it is not. In her current exhibition in The Gallery at Library Square, Pyle presents her incredibly emotive painting through powerful brushstrokes and luminous colors. Her paintings function like topographical memory maps, texture and color coming together to form an ethereal image of moments half-remembered. For the most part, her images feel familiar. Though the exact locations may not be in the viewer’s own memory map, they are easily recognizable forms and invoke a kinship with her experiences. A laundromat, a fireplace mantel, a group of shadowy figures walking toward a bar, these are familiar images. The ability of her expressionism to invoke memory is a bold tool, connecting to viewers on an emotional level only possible through layered paint.

In her bio, Pyle mentions knowing Anna Bloch, widow of American Modernist Albert Bloch, who was known widely in his time as associating with Der Blaue Reiter (The Blue Rider), whose most famous member, Walinsky Kandinsky, is still considered one of the most influential artists of the 20th century. Pyle cites her relationship with Anna Bloch as formative in her process, pulling heavily from German Expressionism in her brushstroke and chromatic pigments. 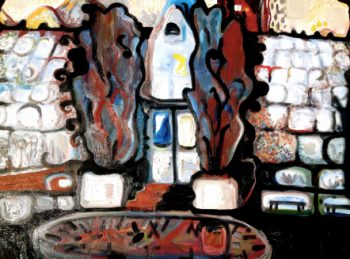 Her influence from the Blue Rider painters is abundantly clear in the Kandinsky-like flavor of “Red, Yellow, Blue: The Greenhouse in Winter,” featuring curved, organic lines surrounded by blue and red foliage. Her statement as well alludes to musical choreography, a routine of ice skating or dancing similar to Kandinsky’s concepts of improvised, visual music. She uses thick, black outlines to incite movement, flowing in between colors like a bar at the end of a measure or the curtain fall after a dance. Each section is its own composition, but they also flow together, creating a more dynamic and powerful piece.

By and large, Pyle’s subjects are buildings. The rigid outline of the structure allows for more movement in other parts of the composition, creating an interestingly didactic painting with both static and moving areas. This is another common element in her paintings — the juxtaposition of still and swirling elements, leading the eye through the canvas while allowing for rest areas. 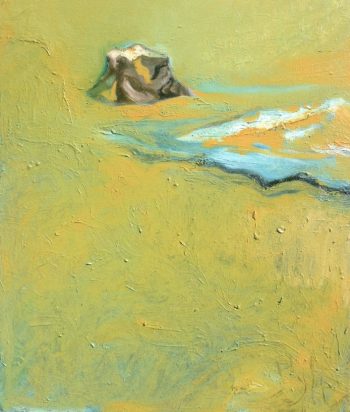 Creating a balanced visual symphony of color and movement is a skill Pyle displays throughout her exhibition, but no painting alludes to her mastery more than “Black Rock, Great Salt Lake, Surrounded by Chartreuse.” The strongest and most vibrant image, the rock, in expressive and robust blue-green brushstrokes, floats on the canvas, radiating tranquility and peace. The scene feels warm, as if painted on a bright summer’s day with the sun beating down overhead, the salty water a misleading oasis, undrinkable. The flashes of yellow and white imitate the process of memory, flashes of color projected against eyelids, an abstract scene commanded by light.

Among her vibrantly colorful and dynamic paintings, Pyle also includes “Instead of the Pale Blue Jeep, the Brownstones,” which feels out of place with the rest of her paintings. Rather than a thick, colorful display of memory mapping, this painting is mostly outlined in pencil with a thin layer of sky-blue paint in some areas. While the intent behind diversifying an exhibition is commendable, this piece is not as successful as Pyle’s other paintings. The pencil-sketched quality could be meant to convey a sense of jotting down a long-ago place or capture a moment of emotion, but this association seems forced and not nearly as natural as the wandering color of her other paintings. The canvas feels unfinished, but not with a half-remembered quality. In a different exhibition among similar pieces, perhaps “Instead of the Pale Blue Jeep, the Brownstones” might have felt less stark and jarring, but next to the rich, complex paintings surrounding it, this singular, different painting seems only rushed and incomplete. In short, it seems a shame that Pyle, with her mastery of color and brushstroke, would include a piece which showcases neither. 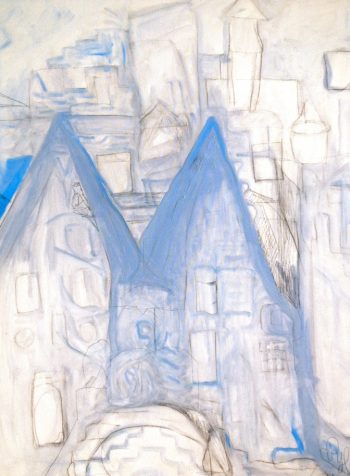 Pyle’s brushwork is graceful, bold, and intricate, creating beauty from mundane, daily scenes. The emotion behind her works causes the viewer to reflect on the short, barely remembered moments of life and the changes constantly being made to memory. Like a memory, each glance at Pyle’s work seems slightly different, diverse elements coming forward or receding simultaneously.