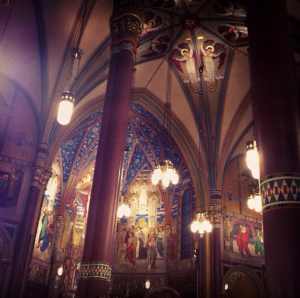 This past Sunday, May 10, 2015 the Choir of the Cathedral of the Madeleine, with the Cathedral Chamber Orchestra, performed two choral compositions by composers acknowledged to have been masters of their craft. One, Mozart, was a musical genius, and the other, the Frenchman Charles Gounod, is a much lesser light in the pantheon of great composers. However, Gounod has still earned his place.

While many of Mozart’s compositions are frequently performed, Gounod’s at times Romantic-era compositions are really only represented in concert halls today on any consistent basis by his two operas, Faust and Romeo and Juliette. Utah Opera last performed Faust in October 2003, and Romeo and Juliette in October 2005. His two symphonies hide on the fringes of the orchestral repertoire, but deserve better — the Utah Symphony performed Symphony No. 1 under the baton of Vladimir Kulenovic in July 2012 at St. Mary’s Church just outside of Park City. His choral works seldom appear on any concert programs, although he composed over twenty masses, not counting other religious choral works.

As part of the 2015 Madeleine Festival at the Cathedral of the Madeleine, the Cathedral Choir performed his St. Cecilia Mass. This was the last concert of the Festival. It was also an anniversary of sorts, as the performance commemorated the centennial anniversary of the death of Bishop Lawrence Scanlan, under whose auspices the cathedral was built.  Scanlan died on May 10, 1915. He was Salt Lake City’s first Roman Catholic Bishop. The St. Cecilia Mass was performed for the dedication of the cathedral during the weekend of August 14-15, 1909.

The Cathedral Choir, under the artistic leadership of Gregory Glenn, its Director of Liturgy and Music for many years, has become a well-honed force on the local classical music scene. It presents at least three major choral concerts from September through May. This Madeleine Festival concert again exhibited the polished and often spirited nature of the Cathedral Choir and its assembled orchestra.

Wolfgang Amadeus Mozart’s Te Deum laudamus in C major, KV 141/66b was the first composition performed on the evening’s program. This Te Deum, composed in 1769, is an early work by Mozart lasting less than ten minutes, and is a little torrent of inviting and spiraling harmonies and rhythms. It was conducted by Melanie Malinka (Director of Music at the Madeleine Choir School) with vibrant rhythms and fleet harmonies, all well-projected in the resonant cathedral acoustics. The blend of the choir was excellent in all registers. Tempos were well-chosen, with a nimble and invigorating pulse.  The strings articulated smoothly. The choir consisted of about 32 singers, with a small orchestra. This was a truly compelling and resplendent performance, and for this reviewer was the highlight of the evening.

Now on to Charles Gounod’s Messe Solennelle en l’honneur de Sainte Cécile, or St. Cecilia Mass. Gounod (1818-1893) was a devout Catholic.  The St. Cecilia Mass was premiered in November 1855 in Paris, and is the most-known of his mass settings. It is approximately 45 to 50 minutes in length, and is scored for three soloists, mixed choir, orchestra, and organ.

The three soloists often amplify or reflect on the choral parts, and really have no extended solo moments. The soprano soloist was Melissa Heath, the tenor was Andrew Maughan, and the baritone was local stalwart Tyler Oliphant.

The opening Kyrie’s gently intensifying and receding lyricism was atmospheric from the start. Gregory Glenn adopted an expansive tempo that was a little ponderous at times, although the phrasing remained free of any heaviness and was often lightly etched. Textures were transparent.  Melissa Heath, the soprano soloist, was a bit harsh in tone, with a fast vibrato, that at least in this movement I felt distracted a little from the transparent texture — but then again contrast often helps to frame choral textures.

In the second movement, a Gloria, the horns and strings of the opening registered smoothly — along with the harp.  At times the orchestra was a little tentative in its articulation, but it also played with much fervor when it was needed the most. The Amen at the end of this movement was delivered in a rousing fashion. Baritone Tyler Oliphant’s solo was polished and focused, although Andrew Maughan’s tenor moments possessed a slightly grainy tone.

In the third movement, a Credo, tempos were fleet despite the initial tempo marking of Moderato molto maestoso; choral and orchestral textures were bright and bracing.  With articulation light and pointed, this was a highlight in this performance of the Mass. A momentary upward line by the flute flourished with lucidity. When the three vocal soloists sang as a trio, they blended well in tone and vocal texture. The Et resurrexit section near the end of this movement was intensely driven, and all the better for it. The sheen to the strings at the end was notable, almost as if sheaves of light rain were descending on the audience.  Balances were attentive, but at times the strings struggled to be heard forcefully. The organ entry at the end unleashed a supple magnificence and even regal power. The organist was presumably Cathedral organist Dr. Gabriele Terrone, although he was not credited in the program.

The fourth movement, an Offertorium, is only played by the orchestra. Here the strings lacked some color in the violins, but the cellos and basses generated the needed allusions to rainbow hues. The violins did phrase warmly though. Some lack of poise and shaping in the overall melodic arc was also evident. Nicely resonant horns paced the concluding moments.

The fifth movement, a Sanctus, engaged the audience with a lively fire to the melodic lines from the choir. A fiercely radiant ending helped compensate for a rather uneventful reading.

The sixth movement is a Benedictus. Here the soprano Melissa Heath sang with much feeling, and blended in an engaging and captivating manner with the organ. The choir conveyed a deeply felt sense of striving harmonies, and the concluding Hosanna in excelsis reared a transcendent simplicity. This was a beautifully rendered Benedictus.

The seventh and final movement, an Agnus Dei, was carefully shaped.  Although the orchestra phrased its lines a little hesitantly at the beginning, the brief tenor solo splashed some luster upon proceedings. The soprano solo line here could have used a bit more inflection, and some ponderousness lodged into the tempo marking of Andante moderato.

Overall, this was an inconsistently shaped performance and interpretation of this Gounod mass, with some glorious movements and moments, but some that were more prosaic. But then some might say that this is the nature of much of Gounod’s choral music. Performers and interpreters can only do so much, even when they are as superbly trained as are the many children who sing in the Choir of the Cathedral of the Madeleine. It always deserves to be mentioned that the cathedral’s interior space helps to accentuate music of a religious nature. It is an intimate yet awe-inspiring setting that never fails to invoke a shy respect for the heavens.