Children of the Muse and Endangered Species at Art Access

Children of the Muse, A Photographic Exploration of the Creative Process, an ambitious exhibition by noted Salt Lake photographer, Kent Miles, will hang later this month at Salt Lake City’s Art Access gallery.

In 1984, Miles, a graduate of the Art Center College of Design in Pasadena, California, began a long association with the Center for the Documentary Arts in Salt Lake City, where he has worked to document ethnic and minority communities. His current project, which has been years in the making, attempts to document and explore the lives of creative people. The exhibition will consist of black and white portraits of over twenty-five creative Utah men and women, including painters, sculptors, architects, furniture designers, arts educators, writers, cartoonists, ceramicists, performance artists, costume designers and oral historians. The exhibition also includes interviews of the artists exploring the creative impulse, along with a sample of the creative work of each participant.

Miles says, “Through the past thirty years of making documentary portraits I have had the rare privilege of meeting and photographing artists of Utah. The desire took root in me to learn more about them, particularly about how each one approaches the creative process. I knew that there was much to be learned and the project Children of the Muse began to take shape in my mind.”

The title of the project refers to the Greek goddesses who were responsible for inspiring artists and scientists ­ especially music, dance, theatre, poetry, painting and sculpture. As Miles explains, “They were the children of Zeus and Mnemosyne. They would come to anyone who had the ability to hear their voices. The question for artists became how did one cultivate the ability to hear and respond to the Muse. The Muse, as a metaphor for the mysterious process of inspiration in the creative process, was the basis for my questions during the interviewing of the creative people included in this project.”

According to Miles, the Children of the Muse project starts with this exhibit, which represents its first public debut. The documentary photographer plans to continue photographing and interviewing not only visual artists, but arts administrators, musicians, scientists, educators and entrepreneurs ­ anyone who applies the creative process to their career or to their life. 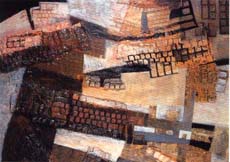 In her upcoming exhibition Endangered Species, Lehi artist Linnie Brown explores how combining opposite ideas and images can create something new and impossible; something that one wouldn’t or couldn’t actually create, except in the invented realm of art.

“The artworks in this series are derived from the idea of turning everyday objects such as telephones and computer keyboards into fossils,” the artist explains. “Obviously some of these items can quickly become out-dated relics in our fast paced consumer society, but they will never become actual fossils. Their plastic, non-organic construction guarantees that these objects will still be around, even when their contemporaries are long since decomposed.”