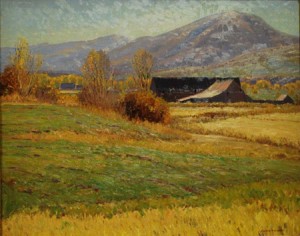 . . . I only learned the next story about LeConte after my column on the artist appeared in 2006. In the 1980s, Davis County evidently placed an assessment on all residents for one aspect of their sewer water, and as a result, LeConte protested by dismantling his toilet and displaying it on his front lawn. I asked the current owners of LeConte’s home what he did without a toilet and they responded that he evidently “watered the garden” around his house. In Federal Heights, we sort of do the same thing with our tulips in the early spring to keep the deer from nibbling on them—but that’s a different story . . .