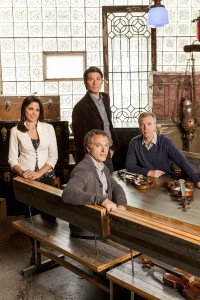 Chamber music, at least in some circles, has a reputation for being difficult to embrace with warmth and then thoroughly enjoy, but those that do tend to become lifelong aficionados. There is often a stark intimacy and immediacy to this genre, and even more so to the string quartet medium.

The Pacifica Quartet, formed in 1994, and one of the best string quartets in the world for a number of years now, has recorded and released all of the string quartets of Dmitri Shostakovich and Felix Mendelssohn for the American Cedille record label (2011-2013 and 2005). The refiner’s fire of these experiences was evident in its performances of quartets of these two composers on the program it performed at Libby Gardner Concert Hall at the University of Utah on January 13, 2016. This was the quartet’s fifth visit to Salt Lake City as a guest of the Chamber Music Society of Salt Lake City, which has existed since 1966 and invites some of the best established and up-and-coming string quartets on the classical music scene to perform in Salt Lake City. This concert met the standards the organization has set over the decades, and especially in its golden anniversary season.

String quartets of Wolfgang Amadeus Mozart, Dmitri Shostakovich, and Felix Mendelssohn were on the program. In that order, one could find elegance spun into whimsical nostalgia, grim and grey radiance, and intensely moving grace, all to be shaped by would-be alchemists into gold. The Pacifica met the challenges with superb technical skill, but three quartets with such distinct soundscapes loomed as an Everest rather than just an Eiger or Annapurna. Conquering all equally and in succession was perhaps next to impossible, but the thrill in the attempts never diminished.

Mendelssohn and Mozart composed string quartets that cover an astonishing range of emotions, although Mozart was more of an innovator in this medium than Mendelssohn. Dmitri Shostakovich’ s string quartets are often viewed as his most personal utterances, and they survey the entire range of his emotional experiences.

String Quartet No. 23 in F major, K. 590, was the last one Mozart composed, in July 1790, and is the third of what are known as his “Prussian Quartets.” The Prussian King Friedrich Wilhelm II, who was an amateur cellist, was the dedicatee, and the quartet was written for him to play. It lasts about twenty-six minutes, and its atmosphere is mostly one of a distant nostalgia sublimated by waves of intense elegance. Mozart’s twenty-three string quartets are staples in performance, but perhaps get less of their due than those of Franz Joseph Haydn and Ludwig van Beethoven. They often leave a more superficial impression despite their brilliance, and their deeper recesses take more than their fair share of interpretive insight to expose.

The first movement is an ebulliently graceful Allegro moderato, and the Pacifica imparted a rigorously graded sheen to the harmonies. The elegant and just shy of immaculate phrasing did lack some drama, but at least there was a hint of charm.

A decorously unwinding melodicism is to be found in the Andante, the second movement, and its phrasing was almost supple, and more intuitively felt than that in the first movement. At last there was some full-blown charm to the rhythmic and melodic poise, and the prominence of Brandon Vamos’ cello lines was truly imbued with translucently shifting tone colors.

In the third movement, Menuetto: Allegretto, a brilliantly buoyant shaping of energetic colors, ensemble unity came to the fore, with smooth and convincing articulation. There was some lack of character as a whole but individuality aplenty in the phrasing of instrumental lines that held a great deal of sparkling demeanor.

A bracingly sanguine Allegro, the final movement was at times on the verge of being playful, with a dry warmth that was never arid. In this performance, the second and third movements were the most successful. This was overall an excellent but never close to exceptional interpretation of this Mozart quartet.
Shostakovich composed fifteen string quartets, and they are considered to be among the most important in the medium in the twentieth century. No 13 is in B minor and is Op. 138. It is almost a valedictory work, with its saturated bleakness, and is in one continuous movement of about twenty-three minutes duration. It was composed in 1969-1970, partly when Shostakovich was being treated a medical clinic in Kurgan, Russia.

The first section is an Adagio, with a brief viola solo. The Pacifica Quartet was much more in tune with this quartet’s atmosphere than that of the Mozart played to open the evening’s concert. Here the viola and cello lines were a most expectantly compelling, driving descent into a grey darkness, with the cello also at times evoking a piercing drift towards a fading halo of warmth.

The second section is marked Doppio movimento, and here the first violinist’s shards of brief chords were superbly integrated with the textures of the three other instruments. The viola’s textures were like warmly pulverized velvet, and the ensemble playing was suitably smooth, intensifying the dark colors.

The third and final section is Tempo primo, and this saw a hushed intensity to the textures and harmonies. The solo viola moments, played by Masumi Per Rostad, were deeply felt, the high solo viola ending included. Overall, we experienced an entirely convincing interpretation of this Shostakovich quartet, notable for the smoothness of phrasing and intensely colored harmonic lines, with stunning intonation during the high-lying final seconds.
Mendelssohn’s Quartet No. 4 in E minor, Op. 44, No. 2 was written in 1837 (revised in 1839) and first performed in October of that year. It lasts about twenty-five minutes and is in the same key as his most famous violin concerto, which has been firmly ensconced in the standard repertoire for decades. The same performance arc did not apply to this quartet, with its atmosphere of turbulence, but it is now hovering almost inside the standard string quartet repertoire. Mendelssohn’s six string quartets tend to still be a little neglected in performance despite this change.

The first movement, Allegro assai appassionato, had its mood of desperately searching elegance set from the first notes, with phrasing that was supple and effervescent, yet still possessed a slightly rugged tonal residue and sheen. The softer transitional section was nicely characterized, with a wistful ardor, and the following lyric sweep unmasked most defiantly.

A Scherzo: Allegro do molto, the second movement’s pulsating urgency also saw the Pacifica establish the mood from the start, with a notable rhythmic impetus, subtle yet vigorously smooth. Cello lines had a darting richness of color, and there was an exceptionally nimble intensity to the phrasing overall, shifting and intersecting lines almost playfully carefree.

In the third movement, Andante, the atmosphere of unreconciled pain was a established with less ease, yet it was soon grasped firmly, especially by cellist Brandon Vamos. A softly caressing sheen of colors bloomed, and the flourish to the first violin’s lines, played by Simin Ganatra, never lost its clarity. All parts were balanced in an exceptional fashion.

A Presto agitato, the final movement’s almost relentless despair was a little less forcefully projected at first, but there was a creeping, incisive interior sweep to the textures. The agitato marking was a bit underplayed over the course of the movement, with melodic motifs perhaps too windswept. Some loss of harmonic momentum was valiantly overcome with a deeper exploration of the dismissive wistfulness also embedded in the mood. A contrasting sense of unadulterated fun permeated the playing, especially in the truly upheld presto marking, and an authentic lyric sweep was unleashed in the final measures.

The performance and interpretation of this Mendelssohn quartet was the most mood-drenched of the three quartets on the Pacifica Quartet’s program. Although the last two movements of the Mendelssohn were slightly inconsistent in attack, the first two movements were the best of the night as both interpretations and performances. The last two almost reached the same plateau of artistry. So, the evening closed with the most formalistic composition surpassing in its interpreted passion and drive the two more adventuresome ones. A peak reached and two others ascended with ardor.

A summation of the interpretations: a Mozart quartet that was observantly elegant but refrained from delicately probing its undercurrents, a Shostakovich quartet in which the unrelenting bleakness was missed by the most minute of margins, and a Mendelssohn quartet infused with some of the most radiant playing and mood-setting imaginable.