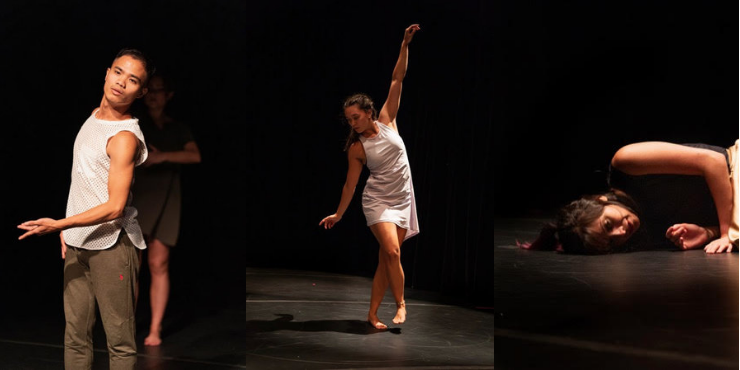 Dancing is this big ongoing thing. More than anything else, it continues – past the blackouts, wings, and curtain calls – far beyond where the bodies come in and out of view.

I think about such ongoingness when I see a show like Forge, presented at Westminster College July 19 & 20 by Cat + Fish. Artistic Director Cat Kamrath’s contributions to the evening form a suite – Strong Back, Soft Front, and Wild Heart. The mark of the university as a container for dance – a recent historical phenomenon – is strong in these works. It might be easy to criticize these pieces for the straightforwardness of how they use basic compositional tools. It might be easy to criticize the bodies getting tossed in the air based on a logic common to dances made to make better dancers. But, here indeed are strong, vivid, well-trained but still human performers. They feel their way through what they’re doing with a presence that’s more than academic. They don’t leave you feeling left out of a secret. The pleasures are infectious and intended to be available.

I do find myself wondering if Camrath’s use of sound as wallpaper is what’s keeping these pieces from transcending their context. She might do well to take risks with music that would make real choreographic demands, or to play with more silence.

Daniel Do’s work Fortitude, though at times melodramatic, gestured toward such an approach. Performed by Kamrath, who’s more unorthodox as a performer, Fortitude seemed to be about a woman in search of a self-knowledge available only through sweat, trial, and error. Five lonely balloons shivered eerily in moments when Kamrath paused to reflect.

Natalie Gotter contributed Anna, a duet for Molly Cook and Conner Erickson. Dressed in matching gray and white uniforms, the two drew pictures on butcher paper and eventually on each other. This twinning pair seemed inevitably a couple – it’s still so hard for us not to imagine a man and women partnering as such. Anna had a coldness that somehow put me in mind of science fiction. I appreciated the commentary about how we relate to each other through increasingly banal signs and symbols. By the end, they might have been tattooing each other with emojis.