Canning Culture: Shelf Life paints a portrait of a community, one jar at a time. 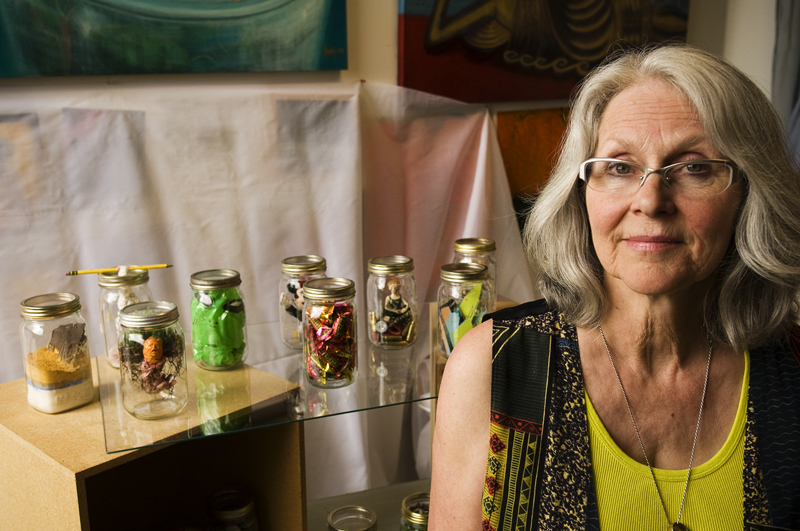 Trent Alvey with some of the Shelf Life jars

The specs are simple: take a wide-mouth canning jar—Kerr, Mason, or Ball brands are preferred, to create a sense of uniformity—and put whatever you like inside, which immediately takes that notion of uniformity and turns it on its head. That’s the basic recipe behind what mixed-media artist Trent Alvey has taken to calling, “the jar phenomenon.” When the common jars are lined up with their disparate contents, an interplay between diversity and cohesion develops, creating a conversation that seems to resonate with just about anyone who encounters the display. “Hopefully,” says Alvey, “most people don’t go to a lot of trouble to make a jar. It’s not something you want to spend too much time thinking about. The idea is that whatever you put into it becomes part of a greater communication.”

In the upcoming Art Access exhibition, Shelf Life: Preserving Artifacts, Alvey is continuing a wide-ranging dialogue that began back in 2007, around an oddly-situated closet that partially obstructed a hallway in the original 337 Project building. The closet was one of three areas in the building where Alvey worked side-by-side with other artists to create what became a massive piece of collective, ephemeral art. She covered the closet door with black and yellow hazard stripes and radioactive warning symbols, then set up shelves with rows of canning jars, partially filled with liquid and lit with an eerie blue glow. The closet was inspired by Alvey’s childhood memories of her elementary school teacher collecting vats of milk for radiation testing by the Atomic Energy Commission, during the years following open air nuclear testing in Nevada. Alvey recalls watching as visitors peered into the closet through a small window, some sharing stories about their experiences as down-winders. Watching people react so personally to her art opened her eyes to the possibility of a new level of accessibility in her work, and the overall feeling of camaraderie among the artists inspired her to pursue more collaborative projects. 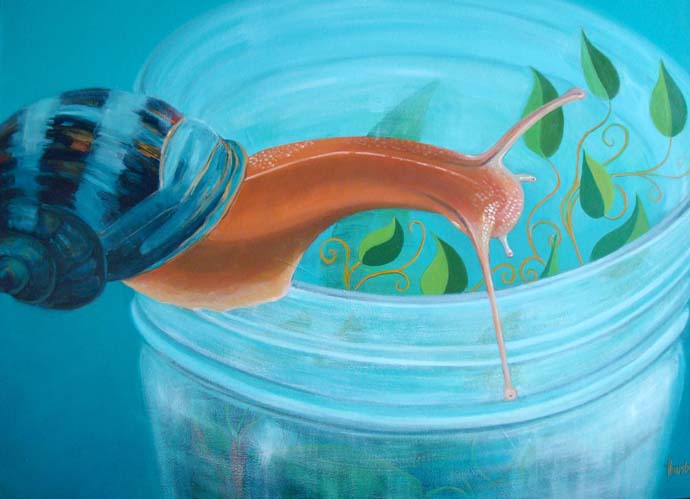 Over the past two years, Alvey has played the roles of both artist and curator in the large-scale group installation, Exposed: Exploring the Legacy of Nuclear Testing, at the Pickle Company in late 2007, and she has focused much of her personal artwork on the concept of emergent phenomena, or self-organizing systems. In 2008, she created an installation entitled Urban Artifacts for the Salt Lake Art Center show, Present Tense: A Post 337 Exhibit, which included 210 canning jars, filled with random, everyday objects and set on basic utility shelves. Alvey filled many of the jars herself, and, after a while, began inviting others to create jars of their own. The result was a cross-section of interests, intimate details, and aesthetic preferences that served as a micro-tour of a complex society. Put simply, the whole was bigger than the sum of its parts. Alvey saw this as the actualization of an emergent phenomenon, and it was just the beginning of a concept that would eventually grow far beyond one artist’s vision. 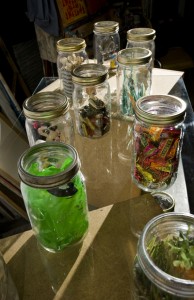 display of jars from Urban Artifacts being used in Shelf Life

The reaction to Urban Artifacts was remarkable; other artists, and people from all walks of life, came to Alvey with ideas for creating jars and investigating the theme of interconnectivity they represent. This led Alvey to approach Art Access with a new proposal: an exhibition that interprets Urban Artifacts through the eyes of 30 local painters and installation artists. Art Access Executive Director Ruth Lubbers describes Shelf Life as an embodiment of the core Art Access principle of community building, which is accomplished through inclusiveness and shared expression. Lubbers, who assembled a jar for Urban Artifacts, has rare insight into Shelf Life, as her jar was chosen for interpretation by Cori Redstone, one of the painters participating in the new show. Lubbers recalls having taken the contents of her kitchen “junk drawer” and put them into a jar, as a way of speaking to who she is. “We all have things we can’t throw away for one reason or another,” says Lubbers, “and I am infamous in my family for being a bit of a pack rat.” Redstone was unaware that she had chosen Lubbers’ jar at first, and Lubbers only recently learned that her jar was being depicted in a painting. Both women were surprised and thrilled when they made the connection, and that mutual reaction—as well as the spontaneous, yet synergistic nature of the creative process that generated the connection—speaks to the essence of the project. As an arts administrator, Lubbers says she views this diverse, collaborative effort as a sign that the momentum of the 337 Project is “headed out into the community,” propagating a vision that offers everyone the “possibility and opportunity to get involved in art.” 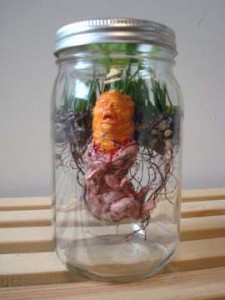 Love in a jar by Elmer Preslee

In this latest exploration of community through art, Alvey and her fellow artists—a group ranging in age from 6 to 80 years, and representing a variety of styles and philosophies—are considering the human tendency to try to preserve moments in time by saving objects of personal significance. Twenty-six painters have chosen jars from the Urban Artifacts collection, or have come up with their own concepts related to the jars, to use as inspiration for two-dimensional works. The remaining four artists have created new jar assemblages, presenting the jars more formally as a form of sculpture. For a glimpse into the variety of motivations and approaches to the project—-from a child’s explanation of the concept of preservation, to professor’s play on words—see the companion video clip featuring several of the participating artists. Of course, the only way to take in the full scope of this most recent step in an evolutionary process is to come and see it in its entirety; Shelf Life: Preserving Artifacts opens at Art Access on June 19 and will be on view there through July 10. 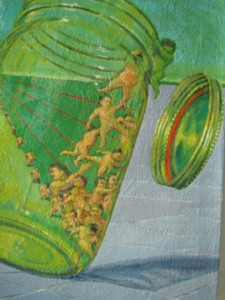 As for the future of the jar phenomenon, Alvey says this might be her final experiment with this particular medium, that she may be “getting the jars out of [her] system.” However, that doesn’t necessarily mean that the idea won’t persist and take on new forms. In fact, Alvey’s jars will soon be making a permanent mark on local culture. The Salt Lake County Art Collection Committee, which is comprised of 15 citizens, has voted to purchase two dozen of Alvey’s jars for the County art collection. According to Community Arts Specialist, Valerie Price, Salt Lake County aims to collect pieces that are historically relevant, and the prevalence of the installation genre in contemporary art led to the conclusion that purchasing work by Alvey would be a prudent choice. Price calls Alvey, “one of the best installation artists in Utah,” and explained that the jars were especially appealing to the committee because they incorporate the element of community collaboration. The 2009 Salt Lake County art acquisitions will be unveiled at an open house in November, and beyond that, who knows? Canning jars are typically sold in bulk…what’s in your drawer?

Shelf Life: Preserving Artifacts, a group exhibition curated by Trent Alvey, will open at Art Access Gallery on Friday, June 19, 6 to 9 pm and continues through July 10. The installation of the The Salt Lake County purchase of jars will be unveiled at their November open house. To receive information and updates about the Salt Lake County Art Collection, contact Valerie Price at vprice@slco.org.

Green they say by Darryl Erdmann

If not now, when? Cathy Dern