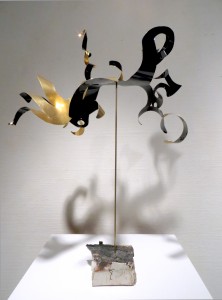 Because kinetic sculptures are often seen in communal places — at Trax stations, in civic centers, parks, libraries — they too often assume associations of banality. Thankfully, the exhibit of small, intimate works by Cal Vestal now showing at the Dibble Gallery in Phillips, reconstruct the essential uniqueness of the special qualities and the possibilities for beauty in kinetic sculpture.

The sculptures, curled and winding shapes made out of extremely thin sheets of metal, frequently in opposing tones of silver and bright golds, blues and reds, vary in form from the suggestively representational to the completely abstracted. Be they wire constructs or balancing mobiles hanging weightlessly from the ceiling, or sturdier creations with curled and winding fingers of shaped metal spinning on a rod, they are simple while being fantastical, formal while being spontaneous, and always whimsical while being admirably evolved in design and structure.

Each piece takes on aesthetic qualities that give it an individual suggestive character, sparking in the viewer a range of sensibilities.  These shapes, that spin or sway slightly as the elements dictate, are created with a lightness of touch and a quickness of mind that belies the sense of weight we usually associate with metal, lending to the works a sense of airy amusement.

Responding to these works, the gallery-goer might take their cues from the aesthetics of the early 20th Century Modernists which by now have become part of our communal vocabulary. The liberty of line of Cocteau’s paper or sculptural works can be felt in Vestal’s delicate edges. Picasso’s abstract animal sculptures were as free in spirit in form as Vestal’s “Sandy’s Cat.” And the sense of balanced harmony that gave strength to Calder’s impossibly balanced mobiles are felt here, not just in Vestals own mobiles, but in all the works.

Visiting the exhibit is like watching clouds on a summer day, as the sculptures, swaying slightly, begin to assume shapes and forms. What each viewer will ultimately see is based on their own experience, and might be something they are cognizant of, or possibly a long past and forgotten memory renewed. This malleability of personality and form allows one sculpture to manifest itself as a rooster to one viewer and to another viewer as a coyote, making the experience very personal to each gallery-goer. Because of these associations, every piece is dazzlingly different and completely open to such semantic play.  At root, these forms, with their twists and curls and interesting appendages, have an innate charm, and it makes sense that the sensibilities that respond to these sculptures will likewise be charmed.

These are fine works of art that bring to the fore a cornucopia of viewing pleasure and engagement via a plethora of meaning.  This is art play for grown-ups with the creation of a lucid subject and narrative in the mind, in the heart, in the spirit, as the goal of the game.  The prize is an experience that charms and delights.

Cal Vestal’s sculptures are on exhibit with paintings by Kathy Minck at Phillips Gallery’s downstairs space, the Dibble Gallery. The show is up through February 8.