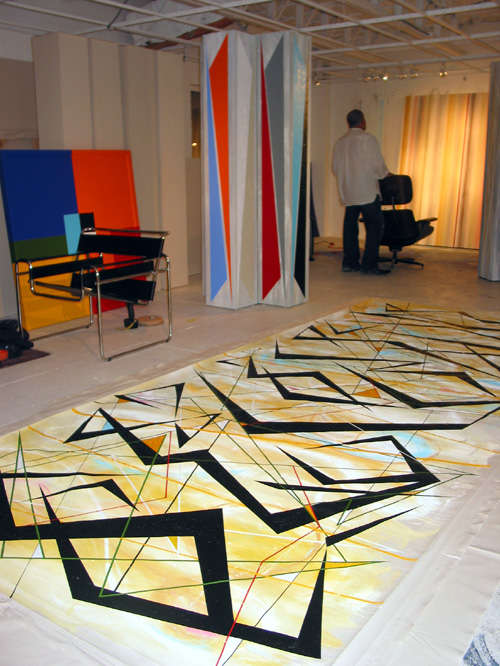 Mr. Bell further distinguishes himself as the thinking man’s abstract expressionist as he continues to develop his hallmark style of intellectual art. Bell strives to amalgamate many aspects of art into his works. “My big, ‘ah – ha’ moment came three years ago when I determined that I did not want to be just another good abstract painter. I wanted to create something new and different,” Bell confides. “I was reading an essay written by Harold Rosenberg in the 1950’s about the action painters, where in he concluded that abstract expressionists go through a daily annihilation in order to re-invent themselves, and create the new stylistic vocabulary they were developing at the time.” Bell, who felt he was also going through such a re-invention of himself as an artist, liked the term “daily annihilation” and used the phrase for a new series of paintings.

This new series was born from Bell’s investigations of Jackson Pollock’s drip paintings. During his recent re-evaluations and studies of Pollock’s work, Bell began to see underlying patterns emerging. Sketches were made of the patterns and scanned into the computer where they were further manipulated. Using the inspiration of motion and emotion evoked by the patterns, Bell began work on the new series. “The painting process was all spontaneous,” he explains. “Each background was quickly painted within a few hours.” The painting process continued with further deliberation of the printed patterns and the over painting was done, further defining the patterns. Examples of this series will be on exhibit at Bell’s exhibit this month at Patrick Moore.

Another new body of work that will be premiered at this exhibit is the artist’s five-piece work, “SOFG #3″ (KIND OF BLUE), where his interest in expressing many facets of cultural influences is readily apparent. This piece is a tribute to jazz great Miles Davis. A 96″ by 60” “wall piece” painting acts as a set backdrop for the four musicians “on stage” and in front. Of course, Davis, as bandleader, is placed ahead of the other three musician pieces. The musicians are 12″ x 84″ x 12″ four sided towers. This set interprets graphically the Davis album Kind of Blue, and is painted primarily with blue tones. 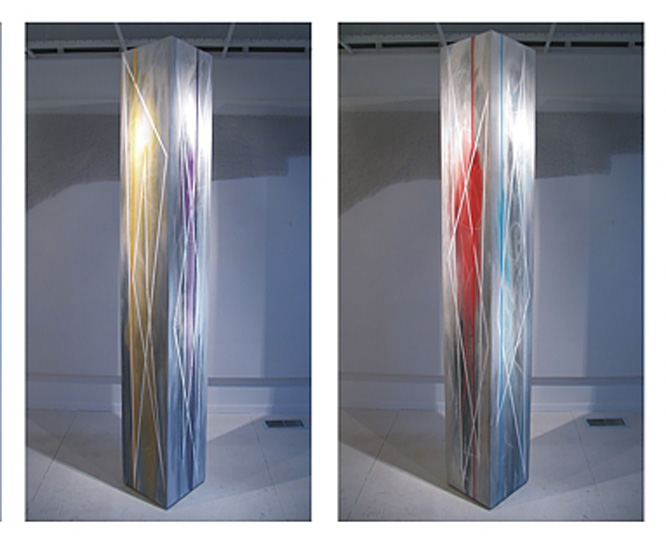 Bell’s series “Standing on Foreign Ground,” is comprised of a number of 12″ by 84″ by 12″ towers, again painted on all sides, and operating as three-dimensional paintings. This is an extension of his “Re-Defining Space” series, and further explores the changing relationships of the backgrounds and dynamic shapes painted on each side of the towers. “I became interested in the concept of kinetics, and determined that the pieces themselves did not have to move,” Bell says. “Instead, the viewer could move and the pieces would suggest movement as they interact in differing ways according to the position of the viewer.” In “Standing on Foreign Ground#2,” the background washes are more developed and the surface painting is softer and not hard-edged.

The new “Monolith” series, the final body of work represented in this show, features more active background painting, employs more colors, and a highly developed sense of movement. In this series, Bell has painted only vertical stripes on the surface. The stripes set up a cadence as the viewer’s eye sweeps the large 120″ by 48″ by 3″ canvases. The stripes also interact strongly with the organic patterns of the background painting. One sees the progression in Bell’s work, as the individual paintings of each series develop. 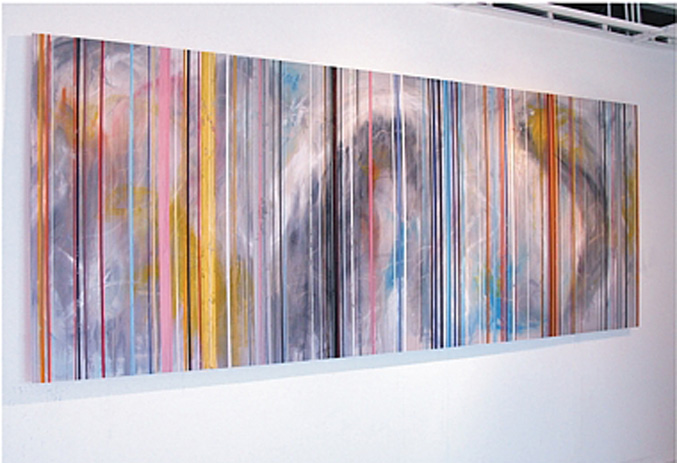 “I painted the works of the different series during the same time period, first working on one canvas, then another. This strengthened the entire body of work, as each new painting profited from the experiences of the previous,” Bell says about the work. “In this way, they all became stronger and more highly developed and refined.”

One can see a natural and rather consistent progression and refinement in these new works. The background painting is more developed and softer. The surface painting is more complicated and rhythmic. Ideas and concepts from the fields of architecture, literature, theater, philosophy and religion are incorporated and expressed abstractly, calling for the viewer’s emotional involvement. And, because many of the works are three dimensional, the viewer can move around them, setting up new relationships.

These new works, as well as the New York premier of the “Re-Defining Space” series, have caught the eye of New York art dealer and gallery owner Charles Cowles. Bell is scheduled for an autumn exhibit at the Charles Cowles Gallery. Congrats to Bell for his achievements and complete dedication to the development of his art. He is definitely one of the hardest working artists I have ever seen.