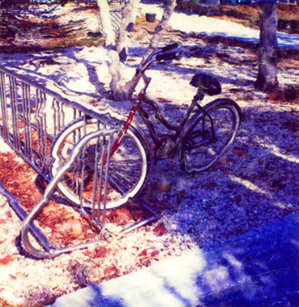 With the development of sophisticated but user-friendly digital cameras, it seems anyone these days can take a decent photograph. And if they can’t, a few classes at a photoshop workshop will enable them to touch up anything that went amiss in the process of pointing and shooting. With the proliferation of slick photography by amateurs is it any wonder that photographers with an artistic bent are turning back to the manual, the retro and, in Amanda Moore’s terms, the crappy (see page 5).

Brock Porter, an award-wining artist form northern Utah who has worked in the graphic arts and commercial photography for over twenty years, is one of these artists. As you can see this month at Universe City, Porter uses an out-of-date camera and rare film to capture instant images and then manipulate the emulsions as they are developing before him.

All of this is possible because of the Polaroid SX70, a blip in the technological advancements of photography in the 1970s. This model, the first instant SLR, was the first camera to use Polaroid’s new SX-70 integral print film, which developed automatically without the need for intervention from the photographer. Due to its unique chemical make-up this film was susceptiable to manipulation immediately after the image was taken and while it was developing. Polaroid quickly phased out the SX70 model, but continued to produce the film to fill the hungry appetites of photographers who had become used to its unique features. That was, until two years ago when it ceased production of the film as well.

By ceasing production of the film, Polaraoid has effectively killed off an art form, notes Porter. “In December 2005 Polaroid announced the end of an era in non-traditional photography by ending its production of Time Zero/Sx-70 film. Effectively ending the art of SX-70 manipulation rendering it…a dead art.”

In his photographs, Porter “pushes” the emulsion material around the photograph to produce effects somewhat like impressionist painting. In addition to treating the original image as a unique work of art, Porter also reproduces these images in a variety of larger sizes. The subject matter ranges from local landmarks, cars, animals, plants, and the familiar, unique or humorous places seen on a family vacation. Vivid colors are a unifying element of the exhibit.

“For me the SX-70 Manipulation process blurs and challenges the definitions of painting and photography by producing paintings with a camera and sticks,” says the artist.

Porter first learned of the process in college in the late 90s but, ironically, only begain working with it in 2004. He first modified aa Polaroid 600 series camera to take the SX-70 film and evenutally worked his way to a full collection of vintage Polaroid cameras and original accessories.

“It forced me as an artist to work within the context of a time based process and have a plan for where to manipulate the image. There is no stopping once the process is in motion. It is both mechanical and hand done at the same time making each image truly unique, one of a kind. It strips away the photographic process down to the very basics almost on the level of toy cameras. It requires just the right lighting conditions. Finally it requires a timing and touch when moving the final image into place while the film is still developing. This process and its constraints forces a new an of ten-unseen view of the world for me. I am able to escape reality for a moment and acknowledge the simplicity of the process or image I am working.”