British Avant-Garde Looks to the Past: Victorian Art at BYU’s Museum of Art 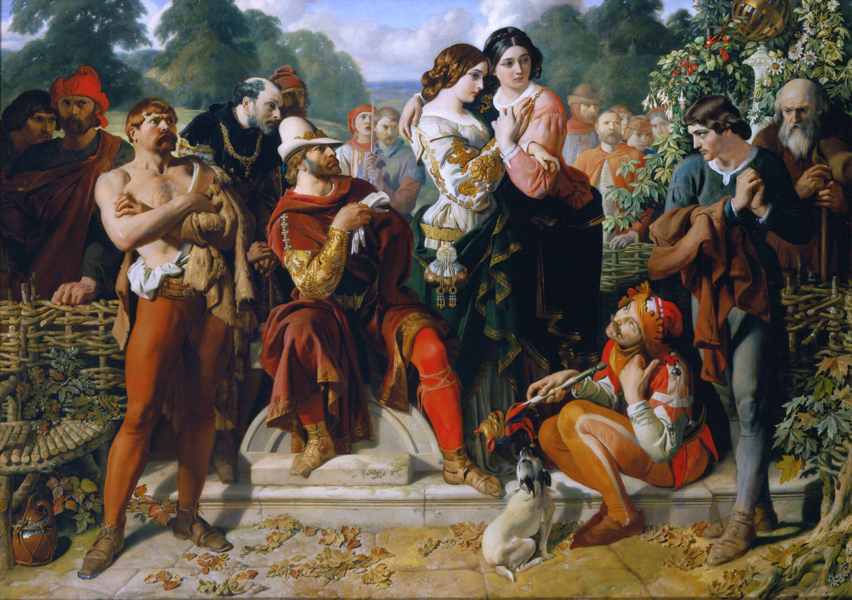 The Wrestling Scene in ‘As You Like It’; Daniel Maclise, 1855

The narrative is familiar to most. In the latter half of the 19th century, many French artists reacted to what they saw as an academic system irrelevant to their tumultuous society by forging ahead into new directions and avenues, reinventing the Classical Model and giving birth to the Modern. Across the Channel, a less well-known narrative played out. The English avant-garde was equally disgusted with the Academy and the limits it placed on artists and its irrelevance to society. As the new exhibit of works from the collection of John H. Schaeffer currently on view at BYU’s MOA demonstrates, while the French were looking to the future, the English avant-garde were looking to the past. It was not until the mid-20th century, however, when the Modernist frenzy was settling and there was no Utopia in sight, that the Pre-Raphaelite Brotherhood and other English artists were given the recognition they deserve.

Today, the ubiquitous popularity of Monet’s water lilies and van Gogh’s starry nights has overshadowed an equally fecund period in English art history. The theory that charged early Modernism in Paris and influenced the work of Cezanne and Manet, the early Impressionist group, and the multifaceted and broad group known as the Post-impressionists, is no more dense than the theory that grounded the Pre-Raphaelites. The French really have no equivalent to the critical influence of English writers like John Ruskin and Roger Fry. The Parisian avant-garde were reacting to their culture;, the English, to theirs. But it might be said that while art was moving in new directions with experimentation and imagination in France, the Pre-Raphaelite Brotherhood — Dante Gabriel Rossetti, John Everett Millais, William Holman Hunt — and the countless others that they were to inspire, were moved by a more humanistic impulse than the purely experimental and cognitive movements of the French. One finds a spirit, a truth to the Pre-Raphaelites. The Industrial Revolution was encroaching upon the serenity of the small and peaceful Isle, and it is no wonder that artists, writers, poets, and critics would cry out for their ancestry, as we do today! 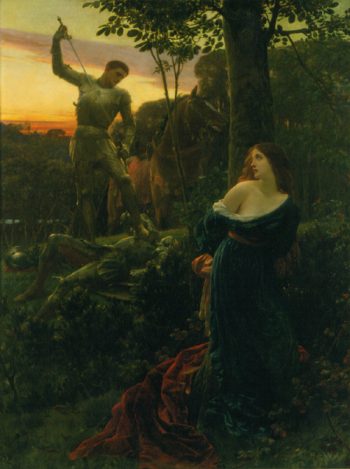 The tendency to look back on tradition, to hold on to it so as not to lose one’s culture is prominent today in England: preserving the red phone booths that all tourists have their photos taken in, the red mail boxes, the on-and-off double decker, the Bobby. These are symbols, icons of the “English,” touchstones to identity not unlike James Dean, Disneyland, and the Fourth of July here in the States. The English of the 19th century had their own touchstones to look back to in architecture and literature. This is aptly evidenced by the painting that introduces the viewer to the exhibit at BYU: Daniel Maclise’s “The Wrestling Scene in ‘As You Like It,’” 1855, depicting a scene from one of Shakespeare’s plays.

The Pre-Raphaelites, the most notable group of artists to come from the Victorian period, sought a simpler and noble past. Medieval subjects were popular. Narratives, something taboo in the French avant-garde, were highly developed, more so than even the most evolved work of a Dutch genre artist. Tales of chivalry, like Sir Francis Bernard Dicksee’s “Chivalry,” 1885, depicting a typical scene of heraldry as one knight slays another to rescue a tree-bound fair maiden were highly esteemed. Lofty subject matter was common, such as John William Waterhouse’s “Mariamne,” a compelling and moving narrative of the wife of Herod who stands in chains before her dishonorable husband who cannot look at her because he knows he has wronged her and is unjustly sending her to her death. Such representations focus on a past where honor, heroicism, bravery nobility and justice actually meant something. 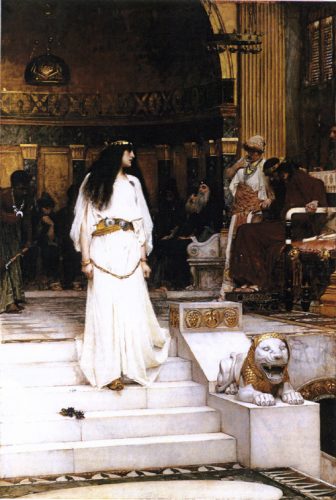 Subject and form are brilliantly conjoined in Pre-Raphaelite work. The Brotherhood, in looking to the past, named themselves the Pre-Raphaelites to approach painting in a manner which predates Raphael, the High Renaissance master who brought Renaissance painting to an apex in its orientation toward a correct representation of nature. He perfected the narrative using exacting perspective, believable space, appropriate color and a balanced composition. Although the Pre-Raphaelite painters could render well, they rejected Raphael’s accomplishment that set the course for 400 years of academic theory in motion. They rejected the slavery to perspective, to exacting space, and a perfectly balanced composition. In this they and the French were in agreement.

As seen in Maclise’s piece and others throughout the show, one might recognize the similarity between the figures’ placement frontally on the picture plane and a medieval frieze. This is best seen in Sir Edward Coley’s “The Pilgrim at the Garden of Idleness,” 1874. Here the medieval frieze is replicated. Maclise’s composition is crowded, as were many of the original Brotherhood’s work, and reflects the subject in an animated and loose composition with no apparent concentration on perfect balance as prescribed by the academy. Colors are broad in range and haphazard. The result is a lively and provocative display, interesting in its uncanny reality and adherence to the humorous subject.

Color was a dominant factor in much of the Pre-Raphaelite work, as well as the painting that followed. As mentioned, Maclise does not hold back with his color palette and in William Holman Hunt’s “The Sweetness of Doing Nothing,” the subject may be reclining lazily but the color is alive and unrestrained. Hunt’s piece also introduces a curious aspect of the Brotherhood’s work — a penchant for red hair. This is evident in Hunt’s piece as well as in others in the show. Why they, especially the original three, chose this motif is equivocal, but it has a pre-contemporaneous quality and a classical appeal.

As mentioned, Masterworks of Victorian Art not only refers to the original Brotherhood, but represents the many followers that were influenced by them through the end of the century. The impact of their ideas can readily be seen as one identifies Pre-Raphaelian elements and recognizes them in other works in the show. This aesthetic lends itself to mental as well as emotional and spiritual edification. The art of the Victorian era, referencing the life of the monarch, 1837-1901, was no less than thriving. Annual exhibitions at the Royal Academy of London propelled a body of work as vast as any period, if not more so, save our own. The subject matter was across the board but tended towards genre painting and narrative work. The pieces in the MOA show that do not resonate with the Pre-Raphaelites have a charm of their own, overtly sentimental though they might be. Some are more profound such as Thomas Faed’s “Worn Out,“ depicting a tender relationship between an impoverished father and his son, but most lack a sublime element of true human emotion such as the transparent James Archer’s “The Betrothal of Robert Burns and Highland Mary.” 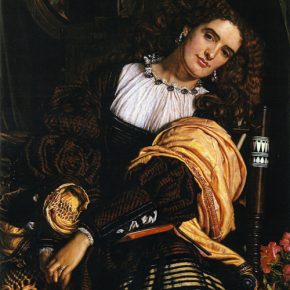 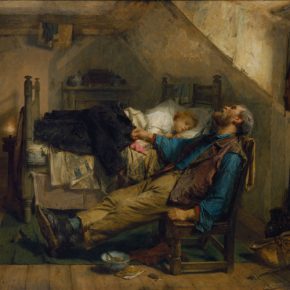 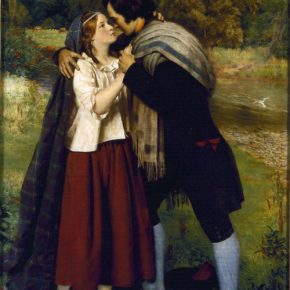 James Archer’s “The Betrothal of Robert Burns and Highland Mary”

However, these artists, like the Pre-Raphaelites, also seem to gravitate toward the past, embrace tradition, recapture Old England while soot darkened the London skies and steam engines cut through the pristine countryside.This exhibit may not have the best or most well-known works from the period like Millais’ “Ophelia,” or Rossetti’s “Venus Verticordia.” But one must enjoy this exhibit for what it is, an educational experience, the caliber of which is not usually to be found in Utah- appropriate to the institution which houses it. As today’s viewer looks back, as traditional as we have become as a society and not losing our heads in relativism and contemporary uncertainty, there is much to be gleaned by this exhibition and the mission of the Pre-Raphaelites. If we care for our origins, for the best we are as human beings, the Victorian Era did its best to do the same.

Masterworks of Victorian Art from the Collection of John H. Schaeffer is on exhibit at the Brigham Young University Museum of Art through August 16. You can find a discussion of Victorian Art at the blog Genius in Beauty.