[dropcap]One[/dropcap] of the most compelling breakthroughs in modern linguistics, and a necessary step on the way to proving that language has become genetically programmed in humans, was the realization that all people everywhere speak essentially the same language. Made up of words and rules for combining them, it requires only that new humans learn the specifics of their own dialect—its particular words and a few variable rules—to be able to communicate with great precision. Unlike other attainments—cooking, microbiology, writing—speech requires no formal training.

Recently, Stephen Wolfram, a computer scientist and entrepreneur, announced that he’d come to a similar conclusion about life on Earth, and not just among humans: that “we are one organism, in a sense, unfolding as the program invents itself spontaneously.” Aside from containing an elegant restatement of Darwin’s view of life, Wolfram’s vision incorporates recent discoveries that the varieties of living things on Earth are more diverse, more complex, and present a greater sense of continuity across the spectrum of environments than had previously been thought.

An example can be found in the subject of Trent Alvey’s latest scientific exploration and artistic response. I’m Floating In a Most Peculiar Way takes as its subject Holophilic Archaea, which are less intimidating than they initially appear. Holophilic means salt loving, and refers to organisms that can live in the otherwise poisonously salty Great Salt Lake. Archaea, on the other hand, are creatures once thought to be bacteria, but which are now recognized as an earlier, more primitive life form—hence the name, which comes very close to a more familiar word: archaic.

The gradual unraveling of the much-misunderstood living conditions that exist in the Salt Lake has led, among other things, to a realization that living beings therein may have much to teach scientists about the origins of life, which initially occurred under far less hospitable conditions than exist today. In fact, a major part of scientists’ concerns about the environmental changes now taking place has to do with this part of our history. If living things gradually altered the Earth to make it easier to live here, and if current events are reversing that process, what happens when conditions become so daunting that living things begin to die off? Will the planet revert to being a place where only Holophilic Archaea can live? Is that what happened to Mars?

It’s not an idle, philosophical conundrum. NASA, in fact, has employed parts of Utah as a stand-in for the hostile Martian surface. One part of Alvey’s larger topic concerns research done by NASA in conjunction with Westminster College. She will collaborate in a presentation of some of that material at the gallery in September. She also has on offer a brief introduction to the thought of Stephen Wolfram. She hopes that interest generated by her present show will encourage her audience to look beyond it. Yet while science offers splendid fodder for art, science and art do not perform the same function. And so, sufficient for today, she’s turned the darkened back room of Finch Lane into an unprecedented and exciting new vision of the normally quiescent, in fact seemingly lifeless Salt Lake.

When water gets warmer, it can absorb more salt, up to the point of maximum saturation. At that point, the chemical link between water and the salt it has absorbed becomes fragile. Splashed into the air, such warm, salty water may evaporate instantly, leaving the salt behind as airborne crystals. These often take exceptionally pure geometric form: for instance, an eight-sided prism that looks like two pyramids joined on their square sides. Alvey fabricated such figures, many times the size they would be likely to attain, fitted them with blue lights, and set three of them afloat on the surface of Salt Lake. She filmed them from a variety of angles, including from directly overhead. Then, with the help of Jan Andrews, she edited together various views of the lake and the crystals floating on it, set to a soundtrack designed by Ryan Collenburg. He began with perhaps the most mind-expanding sound ever heard by humans: the sonic representation created to convey the sound of two black holes colliding, which was first recorded in 2016 and, once it was known how to do it, has been repeated several times since.

I’m Floating in a Most Peculiar Way begins quietly, with a sonic representation of small organisms afloat in water. Visual images of those archaea pattern the wall at the north end of the gallery. Near them, the three pyramids sit on the floor, much as they did on Salt Lake. At the other end of the gallery, a full-wall video projection shows the placid lake and, eventually, the blue crystals floating in its midst. Then things begin to happen. The lake comes to life, seeming to surge and withdraw like the ocean. The crystals, motionless at first, begin to move and even to slide rapidly across the field of view. Of course it’s the camera that is moving, and with it the viewer’s point of view, not the pyramids and certainly not the lake. But it doesn’t look or feel like it, and if a viewer stands there long enough, especially if not completely engaged in watching the action, a sense of vertigo and dizziness may follow. The lake almost appears alive.

And, of course, it is. When Robert Smithson built his “Spiral Jetty,” it was believed that the pink color of the water, a major reason for his choice of this location, was produced by brine shrimp. Be that as it may, what’s now known about the life in the lake is far more elaborate and far, far more wonderful than that. Those salt crystals that can form so quickly can apparently enclose drops of archaea that become dormant as they dry out, but can be made active again, sometimes years later, when wet again. To be fair, they are far from the only living things that can perform this magic. Many kinds of seeds are known for spending decades, centuries even, in such suspended animation. Deserts, such as this and others around the world, populate themselves in this way, with seeds that wait patiently for years, then bloom wildly after even a sprinkling of rain. There is far more than this to contemplate in Trent Alvey’s world as it now understands itself. But consider for a moment just this one thought: what if everything that lives on Earth is, indeed, a single organism? And what if it’s really just an elaborated archaea? Why should it not be true that after flourishing for several million years, it will retreat, leaving a hot, dry desert of a planet not unlike Mars, that will lie in wait for some future time when conditions are once again more favorable?

I’m Floating in a Most Peculiar Way may be the most far-reaching of the many science-based projects that have animated Alvey’s art over the decades. For fans of “this red and purple lake,” as she calls it, it’s a special treat: a new way of conceptualizing one of Earth’s few local landmarks that is instantly recognizable from space. For those whose energy and willpower to defend the land has flagged during recent, difficult times, it’s a potential motive to re-engage. And for those who feel they can only—or in any event would rather—contemplate and try to understand the predicament of life on this stony spaceship, here is the key to a huge, previously unknown, piece of the puzzle. 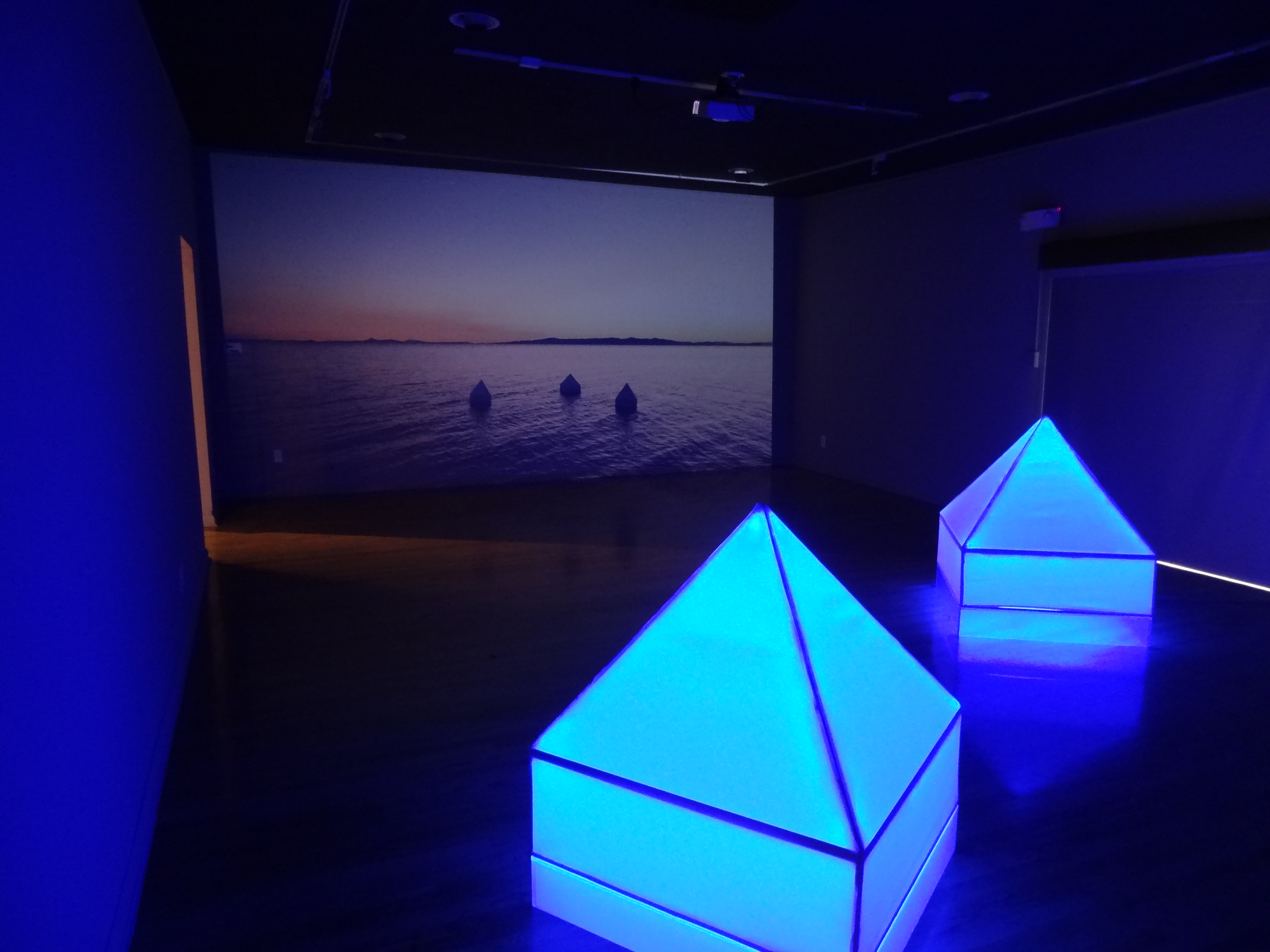