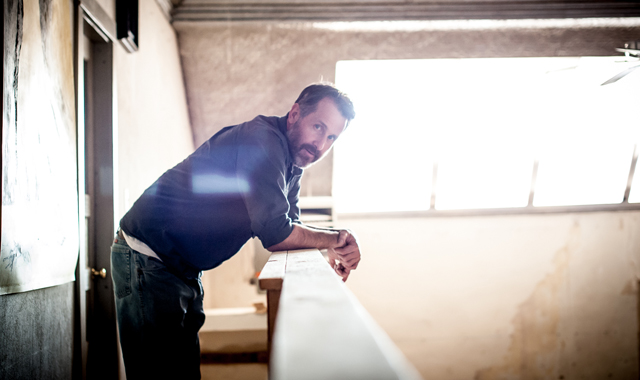 When an artist writes the title of a painting on its front, it’s a safe bet he wants us to pay attention to its meaning, not just its visual impact. In good art, meaning is metaphorical, so a work can support more than one reading. A recent Brian Kershisnik painting, A Child with the Law of Gravity, provides a case in point. A blond toddler in a green dress sits on a black floor, in a variously scribbled blue space. A large arrow, pointing down, emerges from the pattern of blues as a dematerialized presence, floating like a law of nature before the child’s eyes. Perhaps the child is learning to walk and has just taken a tumble, but whatever form the lesson may take, gravity is the perfect example of something no one can explain, even while up-from-down is something we must accept and learn to work with in life.

Brian Kershisnik may have another, richer understanding of gravity. For the first two decades of his life, this youngest of four brothers, with no avocation of becoming an artist, skated over the earth like a skipping stone. His father was a petroleum engineer, and while Brian was born in Oklahoma, but for timing he might have been born in Angola, Thailand, Texas, or Pakistan, the places his family moved through as he grew up. As a formative influence, such a light tread could have made him a certain kind of artist: one who skims the world, sending back visual reports on whatever exotic sights he sees. But by the time Kershisnik started college at the University of Utah, he had felt the pull of gravity, and with it the desire to settle into a thoughtful, deliberate life, which he found on the path laid out for him by his Church. He spent the next two years on an LDS mission to Denmark, then returned to Utah and enrolled at BYU. Growing up, he’d drawn as a way of entertaining himself, but now he began to pursue art in earnest. He studied architecture and ceramics, spent six months in the museums of England, then enrolled at the University of Texas in Austin, where he earned an MFA in printmaking. Once married, he began a family that eventually included a son and two daughters. They settled in Kanosh, buying a house and another building that still houses his studio. Here the two burgeoning streams of his life began to run in parallel. In one, the family man, husband and father, was a member of a small town community where his labor was counted on when a roof needed replacement or a Sunday school class needed teaching, and where his peculiar vocation was correspondingly tolerated. At the same time, he was a figurative painter whose canvases explored the implications of his faith and his view of reality for someone in his circumstances. His approach included insight, compassion, curiosity, and humor. He became, in essence, a visual poet of domesticity.

Central to Kershisnik’s body of work are images of men and women similar to, but not meant to represent or be confused with, his family and their contemporaries. His images begin with visual scenes that somehow catch his attention, with questions he finds easier to think about visually, and with insights that he calls ‘hunches.’ While the core consists of naturalistic vignettes of family life, he often pursues a question or hunch into places even he finds mysterious: his figures sometimes engage in activities or gestures not immediately self-explanatory, like balancing odd objects or waving their arms about. Variations on “They Are Just Doing This” occur several times among his titles. In the central room of the Springville Museum of Art hangs one of several large paintings on such an odd topic, in which men and women lie on the grass in a park-like area, while one of them floats overhead, as if flying in a dream, tethered by a kind of leash to someone on the ground. He has also painted visions of paradise that look—appropriately enough—like a family reunion: his characteristic young adults standing in a field, bracketed by elders, toddlers, and pet dogs. A large fraction of Kershisnik’s work takes this domestic form. An additional body of work represents spiritual matters presented in this same everyday mode. Some are scriptural stories, like the miracles of Jesus Christ, while others seek to convey more obviously supernatural events. For these, he’s developed a personal, visual language for depicting angels, making deceased-but-still-present souls visible, and building up hierarchies of otherworldly figures who appear alongside and interact with his terrestrial figures in ways that suggest blessings or other interventions. In one of his most popular compositions, the Nativity that is now in the permanent collection of the BYU Art Museum, these figures emerge as the visual equivalent of a Greek chorus, witnessing and commenting on the drama of the painting through their expressions. This mechanism, popular with viewers and having the potential to revise the entire history of Christian narrative art, may become a staple in his repertoire. Oceans of ink have been spilt on Brian Kershisnik’s art, but few attempts have been made to explain what makes it so appealing. Much of the answer lies in the contrast between his sophisticated figures and the minimal settings he places them in. On the one hand, his men and women are attractive: youthful, graceful, and fit. They look like people we all admire, even if not that many of them look that good. At the same time, they feel like portraits of specific individuals, not mere types. In other words, we feel they show us ourselves, but in an idealized form, perhaps not unlike Lincoln’s appeal to ‘the better angels of our nature.’ They represent who we would like to become, what we have the potential to be, rather than what we are. On the other hand, the settings and backgrounds he places these figures in, beyond the few sets and props needed for the painting to work, are blank slates on which the viewer can inscribe anything desired. In this way, they are like waking dreams.

All parents should know that part of the challenge of raising children lies in gradually yielding to the child’s growing autonomy. The goal of the job is to become unemployed, and the empty nest is both a reward and a challenge. As their children prepared to leave home, Kershisnik and his wife, who disliked being confused with the women in his paintings, reconsidered the choices they’d made years earlier. Both eventually left Kanosh to pursue separate futures on the populous Wasatch Front, where they continue actively parenting their children through the transition to adult life. Brian kept the studio, a now-isolated haven where he works a week or often more per month, and where he meets with students and fellow artists for bouts of intensive painting. Those whom circumstances make single in their forties almost universally express dismay at the challenge of finding a new relationship. For Kershisnik, who has written that painting is part of his search for the perfect way to live, there was compensation. Art neither begins nor ends with memoir, but his art inevitably tracked his life. As the challenge of finding a mate gave way to the challenge of living with one, as he settled into family and community life, his work broadened accordingly. Now, he can begin to look back at some of his youthful ideas, such as the role of physical appeal in courtship, marriage, and later life, from the perspective of a more mature man. So it’s interesting to see the work showing this month at the Meyer Gallery, including “La Femme Est Observée,” in which a visible force field that emanates from a central figure affects an observer in the corner, and “Want to Kiss,” in which a man and woman face each other across the width of a canvas, while a transparent version of the man has crossed the space to embrace the woman.

The difference between such visually encoded, philosophical inquiries—secular parables, so to speak—and his overtly religious images is less significant to Kershisnik than it is to many viewers. After all, he has stated his conviction that one thing every work of art does, regardless the intentions of its maker, is reveal that maker’s religion. As he uses the term, it doesn’t necessarily mean an organized system of belief, but rather a personal ideology. It’s not the ritual or the authoritarian structure we always see in the art; it’s the cosmology, ethics, and sense of personal responsibility. So as interesting as his recent paintings of men and women are, they should not cause his audience to overlook the magnum opus he chose to show in the Utah’s 15 exhibit, held in the Rio Gallery this month. “The Descent From the Cross” represents a breakthrough for Brian Kershisnik on at least two levels, one of which gave him serious second thoughts as he worked on the large canvas. As he explains it, his Church has chosen to focus on the living Christ, on His birth, His re-establishment of His Church, and His appearance in the New World. With no desire to diminish the importance of those events, Kershisnik wanted to add to them the sacrifice by which He atoned for the sins of humanity, by suffering and dying on the cross. The challenge was to depict, instead of the familiar, living Christ, His dead body. “The Descent From the Cross” asks believers to contemplate the painful implications of their beliefs. Before that, the sophisticated work demanded a formal breakthrough by the painter. He describes his theme in mechanical terms: the followers of Jesus faced with the unfamiliar task of lowering an inert body, yielding to the pull of gravity in a controlled fashion, their task made more difficult by palpable, devastating grief and horror. There are twelve of them, composed in depth, woven around the body in a horizontal S-shape. Kershisnik, given to spacious canvases, had never needed to solve such a complex technical challenge. Arching over this scene, the vault of heaven once again becomes the angelic chorus, three times as numerous as the mortal party, reduced like them to useless improvisation by an incomprehensible event. One detail, seeming trivial at first, grows in the viewer’s mind. Every man and woman who takes part in the descent is unshod, only their bare feet permitted to touch holy ground. This is how the artist finally conveys the full weight of what we witness. Brian Kershisnik has measured the effects of gravity in his life, and is learning to paint them as well. Brian Kershisnik was recently honored as one of the fifteen most influential artists in the state of Utah. His “Descent from the Cross” is on exhibit at Artists of Utah’s Utah’s 15: The State’s Most Influential Artists at the Rio Gallery through March 21. Artists of Utah has published a book on the fifteen artists, including a full-length essay on Kershisnik by Geoff Wichert (click here to learn more). Kershisnik’s works are also currently featured in Camouflage, a solo exhibition at Meyer Gallery in Park City. In addition, he has recently installed two large commissioned paintings for permanent display in the new Beverly Taylor Sorenson Complex of Dance and Education at the University of Utah.