Two exhibits in Utah County this month will allow you to examine and explore modes of depicting the religious and spiritual life. The Springville Museum of Art’s annual juried exhibit on the theme is open through December 27th. North of Springville, the Brigham Young University Museum of Art’s Beholding Salvation, displays historical and contemporary representations of Jesus Christ. The majority of the works come from the University’s collection, including works by Carl Heinrich Bloch, Albrecht Dürer, and Rembrandt. In addition to these historical works, the includes works by contemporary artists such as Ron Richmond and Brian Kershisnik. The latter’s “The Nativity” was the sujbect of a paper by Bren Jackson presented at the Museum’s Biennial Art, Belief, Meaning Symposium, in November. The following is an abbreviated version of that paper. 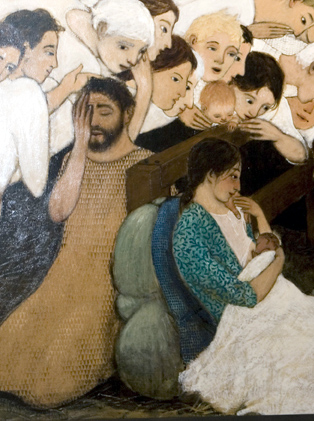 In The Nativity (2006), Brian Kershisnik explores a traditional theme in a subjective manner: the artist’s own experiences become the inspiration for his interpretation of the Holy Family. The Nativity echoes both his understanding of relationships between men and women and his desire to understand those relationships. The mystical fellowship of sisterhood he has personally observed, particularly between his wife and her sisters, is played out in Mary and the midwives, while his own experiences with the bewilderment and confusion of fatherhood leaks into Joseph. These human qualities of Mary and Joseph in the nativity serve as a reminder that ordinary people have the potential to become holy.

Within any nativity scene is the motif of the Madonna and child. This popular subject exemplifies the ideal mother and child relationship, a theme that has appeared frequently in Kershisnik’s work. A pregnant woman, as Kershisnik says, is the most beautiful thing in the universe; “That pregnancy is beautiful because they [women] are Mary.” As a Latter-day Saint, the artist seems to emphasize motherhood as a divine calling. His paintings of women and children inspire a sort of sacred intrigue. The mothers in his works hold their children with confidence and peace. They act fearlessly upon intuition and bear an intelligence of things seemingly foreign to men. They find comfort in relationships and in the company of other women. 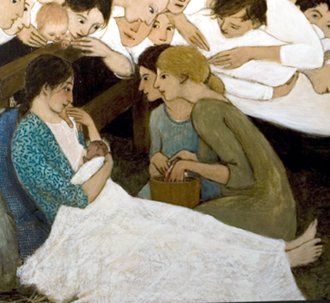 In “The Nativity,” Kershisnik conspicuously includes two women at Mary’s side. These non-canonical midwives assist with the Savior’s birth, their hands still bloodied. Mary’s close relationship with these women is emphasized as they lean nearer to see the new baby. Mary and the midwives embody Kershisnik’s understanding and fascination with sisterhood. He explains: “I grew up in a family with only brothers and married a woman from a family with only sisters. My brothers are now scattered across the country, but I live among all of my sisters-in-law and am fascinated (a polite adjective that describes my feeling only partially) by their interactions. My paintings of sisters are not portraits of the sisters I know. Rather, they are paintings about the connections women seem to have, connections that may or may not include sharing the same parents. All women, it seems, are sisters, but some more than others.” 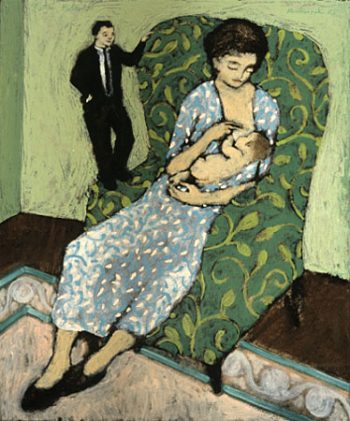 While the women in this scene are intimately involved in the experience, Joseph, although involved with the overall event, is physically separated from the circle of women. The backrest behind Mary creates a barrier between them. As a father himself, Kershisnik may have experienced Joseph’s feeling of exclusion at the birth of his own son, Noah. In “Little Father” (2002), the abnormally small father figure stands perched on the armrest of the chair where his wife sits to nurse their new baby. Although supportive, there seems to be little he can contribute to the situation. This is their mother/child “bonding time” and nothing can replace it. Like Mary, the mother in Little Father, is absorbed in nursing. She is contemplative of her child and what he may become. The father stands a bit awkwardly, ready to do whatever may be needed. But, at this moment his presence is sufficient.

In “The Nativity,” Joseph plays the role of supporter while Mary concentrates on the Christ child and her relationship with the midwives. This crucial relationship is reiterated in several of Kershisnik’s paintings. “Ten Women with Infants” (1997) is a particularly beautiful depiction of this comradery. Here, women gather on a grassy hill to play with their children and talk. The social nature of the activity is emphasized and serves as an opportunity to share maternal joys. Each woman, even if not engaged in conversation, thrives on the occasion. Like sisters, the women in “Mother and Child with Companions” (2003) share in the joy of the central mother. Whether or not the three women are sisters of the same parents is irrelevant. The care and love they show for the child seems equivalent to that of the mother. Her baby is their baby. They are one in purpose. The care and attention the midwives impart to Christ reflects their personal devotion and admiration. “Woman and Child on Wheels” (2002) may exemplify the surety of women that Kershisnik finds so intriguing — their intuition and confidence. This mother stands upright on some rudimentary form of a skateboard. With no steering device, no breaks, and no seatbelt, she clutches her child and smiles. She seems to be on a ride that she has no control of, but is at perfect peace. Similarly, “Woman with Infant Flying” (1995) shows a woman on a journey, yet this time she is drifting. She isn’t drifting aimlessly, but presses forward with a purpose. She knows exactly where she is going and how she is going to do it. The logical mind knows that flying challenges all sense and reason. Yet, the confidence of this woman dispels any doubt that flying is impossible. Likewise, Mary was asked to take upon the insurmountable task of being the mother of the Son of God. When Angel Gabriel appeared to Mary, she simply replied, “How shall this be, seeing I know not a man?” The Angel told her that she would conceive a child through the Holy Ghost. Though illogical to the human mind, Mary submitted to the will of God. Despite the physical exhaustion of Kershisnik’s Mary, she realizes the magnitude of her task and remains calm and confident that God will never leave her. She acts according to the promise in Luke chapter one, “For with God nothing shall be impossible.” 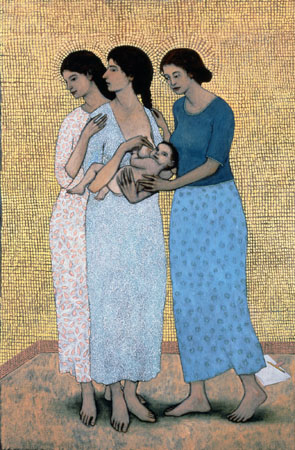 “Mother and Child with Companions”

Joseph’s face on the opposite side of Mary’s backrest provides a stark contrast with the serenity of Mary. He is overwhelmed by the miraculous event and places his hand on his face in shear awe as if to be saying, “What is happening?” There isn’t a lack of faith, but rather the acceptance of something that cannot be understood in this life. In this sense, Joseph represents Kershisnik’s experience with women. He paints about not knowing them. As he describes it, “Having grown up in a family of brothers, I painted my wife’s sisters [as] foreign, exotic, alien — an idea seen from the outside.” They are something to love and respect, but not necessarily understand. In many paintings Kershisnik plays upon the idea that women are filled with a sort of holy intuition and intelligence. “Giving Directions” (2005) may be one of the most obvious (and humorous) examples of his faith in maternal intuition. The woman in the foreground simply gives direction to the men behind her. Without flinching or second-guessing her instructions, they heed almost mindlessly as if to say, “Of course she’s right!” This ironic play on the stereotypical man who will not ask for directions is a statement of the artist’s meekness. Like Joseph, the men in this painting do not call attention to themselves, but humbly accept the guidance. What Kershisnik sees as the simplicity of women is further emphasized in “Would You Just Walk” (2003). The man here seems to be complicating life, yet the woman appreciates the humor and lets him know through a small smile. Mary and Joseph repeat this subtlety in their own relationship. Mary, who is herself overwhelmed and has clearly just given birth, places her hand on his as a sign of love and comfort to Joseph. Although Joseph is in a stupor at the miraculous event, he places a hand on her shoulder as if to let her know that he knows this is right. It is the very human and naturalistic elements that remind the viewer that Mary and Joseph were indeed human and it is through obedience that we too can become holy. 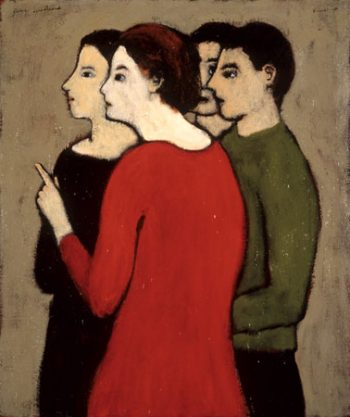 Kershisnik also depicts the large mass of angels, crowding the picture and hovering over the holy family and accompanying midwives, in a naturalistic and human light. Unlike the beloved angels of artists such as Fra Angelico or Giotto, these angels are individuals with distinct personalities. Viewers are invited to consider their own reaction to the events. Would I join the chorus in praise, shed a tear in quiet joy, stare in pure awe, or as one angel does, pat Joseph on the head? The veil between mortality and immortality appears thin. As Mary and Joseph demonstrate, we, as mortals on this earth have the potential to become closer to God. Kershisnik’s Mary and Joseph share the very human moment of witnessing a birth as concourses of angels sing praises the sacred event.

The personas of Mary and Joseph are based on the artist’s understanding, or desire for understanding, of these fascinating human relationships. Despite the differences between men and woman, he recognizes their dependence on one another to become holy. Kershisnik’s nativity personifies relationships, as he understands them. His understanding of women — their mystical sisterhood, maternal intuition, unwavering faith, and potential divinity is found in his depiction of Mary. Joseph’s character stems from the simple awe and holy confusion Kershisnik may have experienced as a witness to the birth of his own children. The inclusion of these very human qualities within a sacred event reminds the viewer of their divine potential to one day become holy and literally fly as an angel. 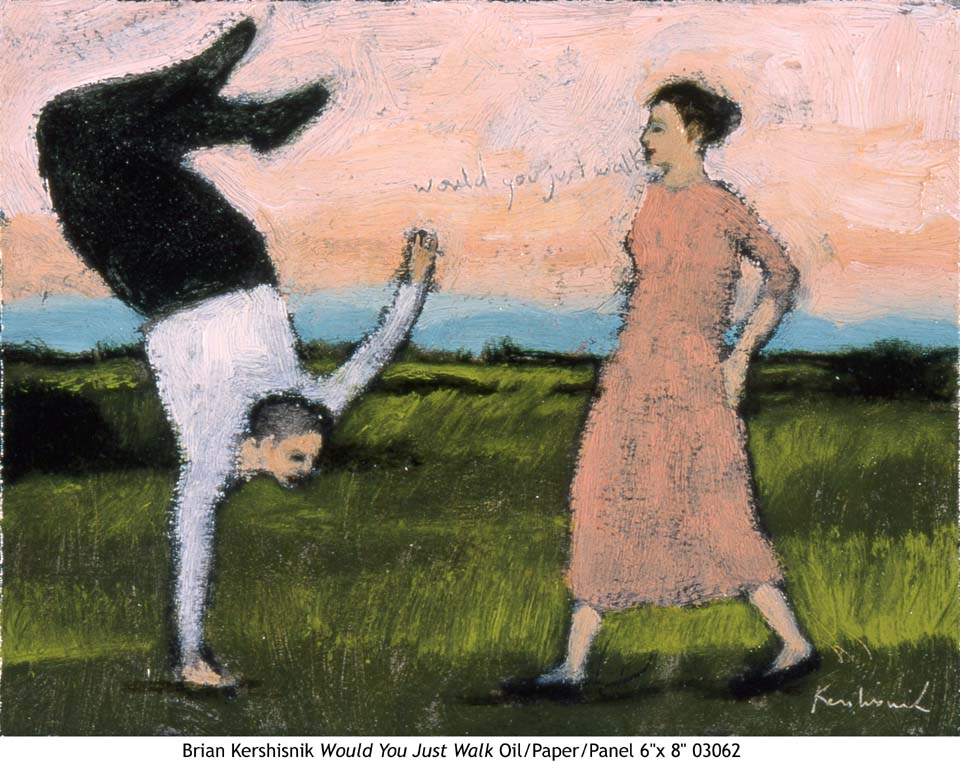 “Would You Just Walk”

more of Brian Kershisnik’s work availabe at his website