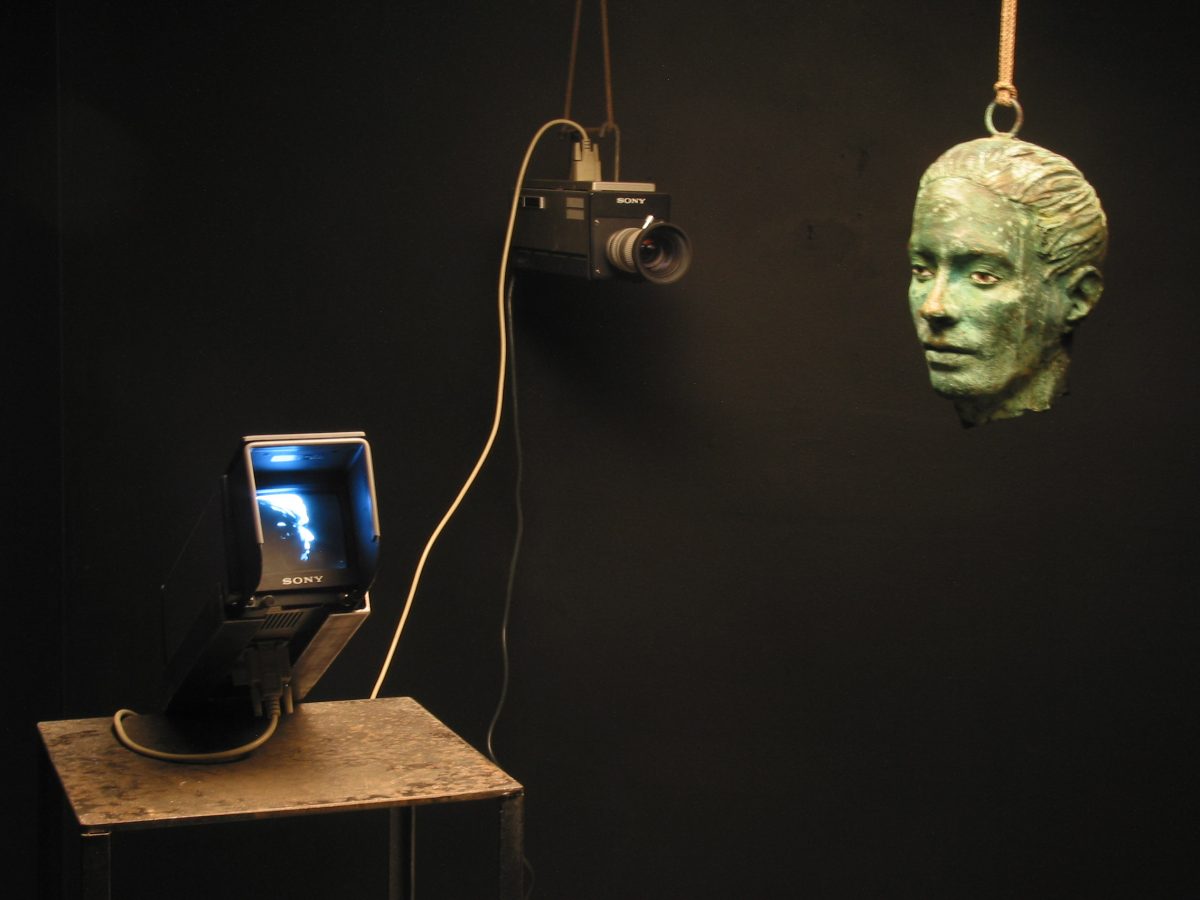 To take a walk in someone else’s moccasins is a strategy that encourages seeing things from a different point of view or perception.

Brian Christensen, an associate professor at Brigham Young University, focuses on perception in his latest series of sculptures, which are now on display at Snow College in Ephraim, Utah.

“We perceive ourselves to need certain things, or to want certain things, which are not necessarily based on reality, but rather social conditioning,” Christensen says. “We think we need SUVs and a certain kind of home and neighborhood.”

Christensen’s latest work is based Cicero’s fable The Sword of Damocles. Cicero tells the story of a Sicilian king turned tyrant, and a servant, Damocles, who envies the tyrant’s lifestyle. To teach Damocles the true nature of his life, the tyrant allows Damocles to live his luxurious lifestyle. He is brought to the palace and treated like a king. Resting on soft cushions, Damocles is offered fine wine and exotic foods. He enjoys himself until he happens to glance up, where he sees a sharp sword, pointed directly at his head, dangling from a single horsehair. Damocles quickly realizes that the tyrant’s life is constantly under the threat of death, and is not as splendid as it appears to be. The moral of the story is to not judge someone until perception is clear.

The central sculpture of Christensen’s series, titled The Lens of Damocles, relates to a camera lens. Christensen’s objective is to not show the sculpture directly, but through the eyes of a camera. The sculpture is viewed by looking at a monitor, which displays what the camera is focusing on: a ten by eight foot framework of a house that has a sculpture of a head dangling from the top of the framework.

Christensen says the camera is used as a weapon of perception. “The camera lens is parallel between Roman society and American society,” Christensen says. The head is supposed to look like a Roman bronze head and is actually a self-portrait of Christensen.

“The piece is really dealing with the idea of perception; perception of danger and of life. Hence, the head is a bell, like an alarm.”

Christensen says he tends to work in two different ways. One is by purely dealing with the beauty and nature of the material he is working with. The other way deals with creating work through concepts, which is the type that makes up most of his current show.

“I would say a lot of [the show] is concept driven and interesting enough; I don’t think up a concept and find a piece to fit it,” Christensen says. “I get ideas of an image and I start building the concept as I’m moving along.”

Christensen says an example of this type of sculpture is one of his that consists of a table with two life-size telephones on it. The telephones have faces and ears on them. The work is titled End of Discussion. Christensen says he saw a telephone and imagined the process of casting it as part of a human. He then started thinking of what different implications for an anthropormorphic telephone would be. As he started casting the telephone, he came up with the concept of one-sided conversations.

“It’s the idea that the poses of the phones are somewhat like when you’re on a telephone conversation that is one sided so that no matter what you say, the other person is not listening.”

Christensen also creates sculptures by reacting to objects that he finds. One of the pieces in the Snow College exhibition is centered around a large sphere made out of solid rubber that one of Christensen’s students found. On the rubber is the inscription “Lord Lastophere.” The strange name reminded Christensen of something demonic, so he made the rubber look like a large witch’s cauldron.

Another sculpture in the show deals with the concern he has of being too imposing of his own ideas on his students. The title of the sculpture is Academic Obsessions and consists of 500 pencil stubs beneath a chalkboard. The words, “Hast thou seen the white whale” (a reference to Melville’s Moby Dick) is written on the chalkboard.

“The idea is that the single-mindedness of academia being like Ahab, where professorship is almost like imposing your thoughts and ideas on the students,” Christensen explains. “One thing that I try to avoid is being Professor Ahab. It can be problematic if you’re too imposing and controlling, so you have to find a balance.”

Christensen’s exhibition in Ephraim consists of 15 pieces, most of which are done in steel cast elements.

Christensen says he never really doubted that he would be involved in art. “It was never really a question, just what I wanted to do, so I’ve always reacted to my environment and the things around me.”

Christensen’s inspiration to go into sculpting specifically came to him while he was in college. “By the time I got into college, I had had interesting jobs like being a dental technician,” Christensen said. “I had learned quite a lit of physical processes and I found that I liked sculpting objects and working with real space.” 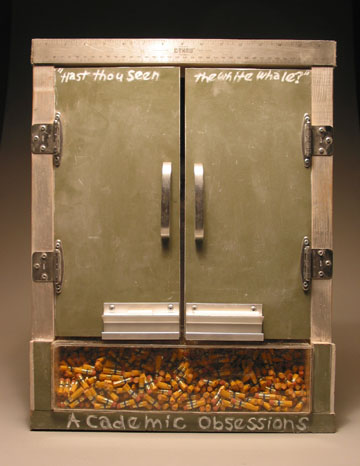 Christensen graduated from BYU in 1989 with a BFA. After graduation he attended graduate school at Washington University in St. Louis for his MFA. He taught adjunct in St. Louis and also taught at the Salt Lake School for Art and Design. Christensen has been teaching at BYU since 1993 as an associate professor of sculpture.

Christensen admits that there have been some discouragements along the way, but it hasn’t discouraged him from doing what he loves. One of the discouragements he is experiencing now is finding the time to do more exhibits without taking away from his teaching career. Christensen loves teaching and feels that BYU has some incredible students.