Brian Bress’s Make Your Own Friends at the UMFA 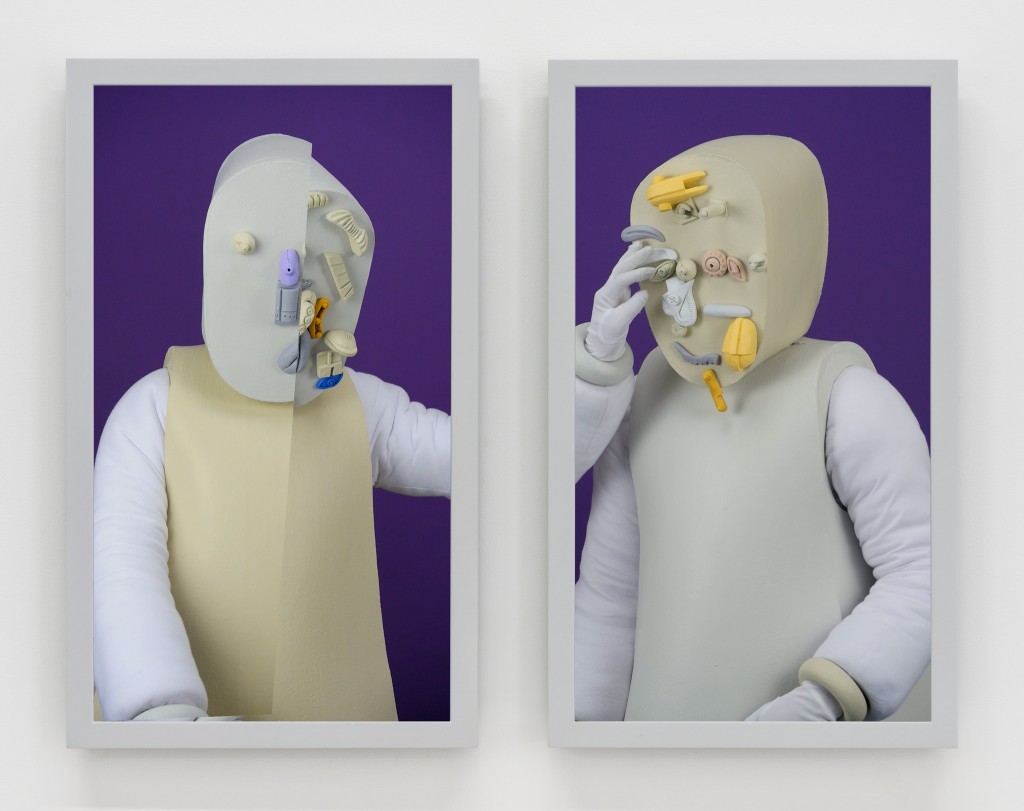 Contemporary art is not your thing. So, when you visit the Utah Museum of Fine Arts, make your way up the broad staircase and spot the colored plastic bottles and piles of sand that “pass for art” in the Phyllis Cannon Wattis Gallery, you immediately hang a hard left—to find pleasure and comfort in the stately and familiar paintings of the Renaissance, Enlightenment and Early Modern periods. Well, do that for the duration of the UMFA’s newest salt exhibit and you’ll be in for a surprise—or, rather, surprises—for interspersed among the works of the museum’s permanent collection you’ve come to love, you’ll find the interventions of Brian Bress’ silent video portraits.

Bress, a Virginia native, works out of an L.A. studio where he creates collages, costumes and props and with them “executes performative acts in front of a camera.” The resulting video, he says, “is the container that holds them all.” When he was an undergrad studying film, video and animation, Bress says he was drawn to painting, which looked like a lot of fun; but in graduate school, where he studied painting, he couldn’t get the idea of moving images out of his mind. Ever since—as this 10-year survey demonstrates—he’s been trying to resolve the push and pull between these two forms in works that are generous, poetic, art historical and plenty of fun. 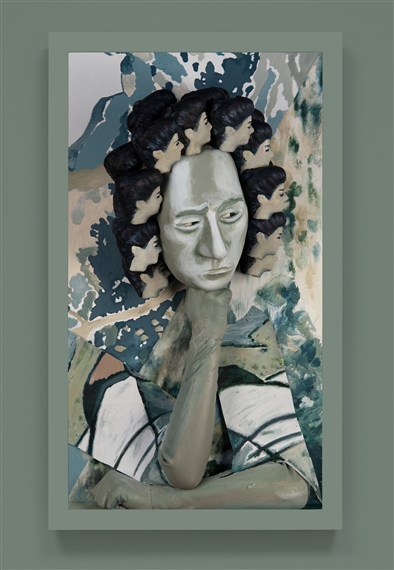 Take that first left at the top of the stairs and in between John Singer Sargent’s portrait of Mrs. Colin Hunter and George Caleb Bingham’s portrait of James Thomas Birch’s wife, you’ll find a third, slightly disconcerting portrait. “Ridley-Tree Sleeper #1” is lit not by an overhead spotlight, but from within; and unlike the frozen images flanking it, the portrait moves— a touch of Harry Potter’s Hogwarts in the museum’s American Visions collection. Impeccably hung to appear like the paintings that surround it, it’s a video monitor. The subject’s arms and head (which is a rough mask with a pompadour made up of smaller heads) poke out from a flat, collaged background. When the figure is still, the whole reads as one flat plane; but a slight drumming of the fingers or a shift of the head—what you see will depend on what point in the 19-minute loop you come upon the piece—brings it to disconcerting life: a strange figure locked in a portrait sitting it can’t escape.

Similar interventions appear throughout the galleries: in “Imposter,” the only work that features sound, the feathers that make up the sitter’s Arcimboldo-inspired face could have been plucked from the 17th-century Dutch “Birds in a Landscape” it faces; “Mushroom (Ellie),” a portrait of the artist’s wife in which a slice of a giant Champignon mushroom obscures and takes the place of the sitter’s face may seem ridiculous, but only slightly more than the oversized starched collar in the 16th-century portrait that hangs next to it; and in the Modern room, in between a Manguin and a Roualt, the figure in Bress’ “Fancy Dress Ball” moves about in an era-appropriate space inspired by dazzle camouflage, Art Deco pottery and early abstraction (the colors—blue, gold, white and black—bring to mind the controversial dress that haunted the Internet earlier this year, so caveat emptor).

Ensconced among western landscapes and a bronze by Frederic Remington, “Cowboy” is a more complicated piece. It began as a simple cartoon drawing that the artist transformed into a foam costume. The video shows Bress as the foam cowboy, standing against a blue-striped grid, meant to call to mind graph paper, as he blindly draws on a plate of glass, completely erasing each drawing—a cactus, a landscape, nonsensical lines—before beginning another. It calls to mind the films that show Picasso and Pollock creating their work on glass, and confronts the traditional idea of painting as window into another world—viewers find themselves on the other side of that window. 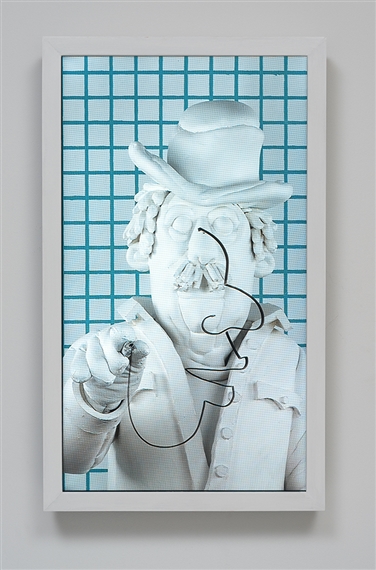 Bress plays with this concept of the picture plane in a handful of other works. “Kelly Drawing Britt” is a faceless pencil portrait in the 18th and 19th Century rooms that reminds one of a Magritte painting. As the video progresses, someone from behind the screen methodically scrapes out the blank face to reveal her own. “370 Cover” shows a grid of six paintings inspired by Sol LeWitt, behind which googly-eyed characters are using jigsaws to cut out windows. Something similar happens in “Three Faces,” where the cutouts from behind photographs of potted plants form simplified faces that could have come out of Picasso’s primitive period.

While these dozen or so videos are busy making friends throughout the museum’s galleries, in the salt gallery itself the various building blocks for the works have been assembled: drawings and collages, the full-size costumes, and early videos where the artist first began developing his ideas. These early works were scripted, with dialogue and multiple camera angles. They are mechanically more sophisticated than the pared-down video portraits, but less so successful artistically.

Some of the costumes that appear in these early videos reappear later in the silent video portraits. In “Beadman,” a hooded costume covered in beads which appears in an earlier narrative ensemble, gets its solo gig in a completely dark setting where it jumps on a nearly invisible trampoline, creating a mesmerizing effect as you wait anxiously to see if the whole costume will come flying apart. This is paired with a similar video, in which a figure in a costume made up entirely of beaded curtains ends up looking like some version of a Yeti, and is shown in a similarly dark environment running on an invisible treadmill. This piece looks so appropriate in the ethnographic exhibit it shares space with, you’d think the whole thing was planned, rather than a fortunate curatorial opportunity; which points to one of the strengths of this exhibit: the individual strengths of Bress’ pieces have been amplified by curator Whitney Tassie’s astute and playful placements.

What do these works all mean? They really don’t: they just are, which is part of their charm. They are not weighted down with pretension or constrained by import. They don’t comment on art history so much as celebrate it, happy to be, as the artist has put it, “a small drop in a wonderful ocean.” 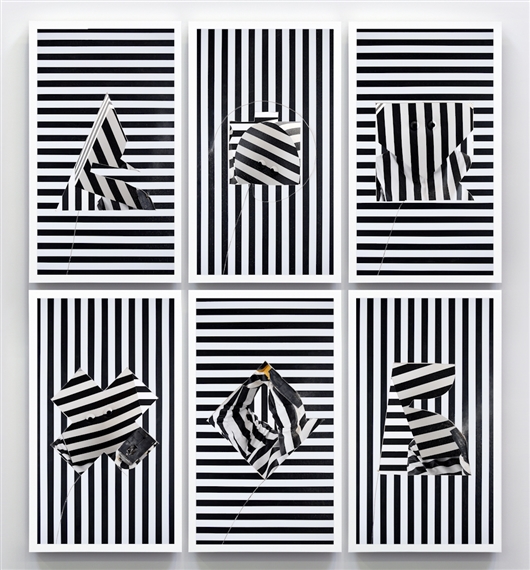