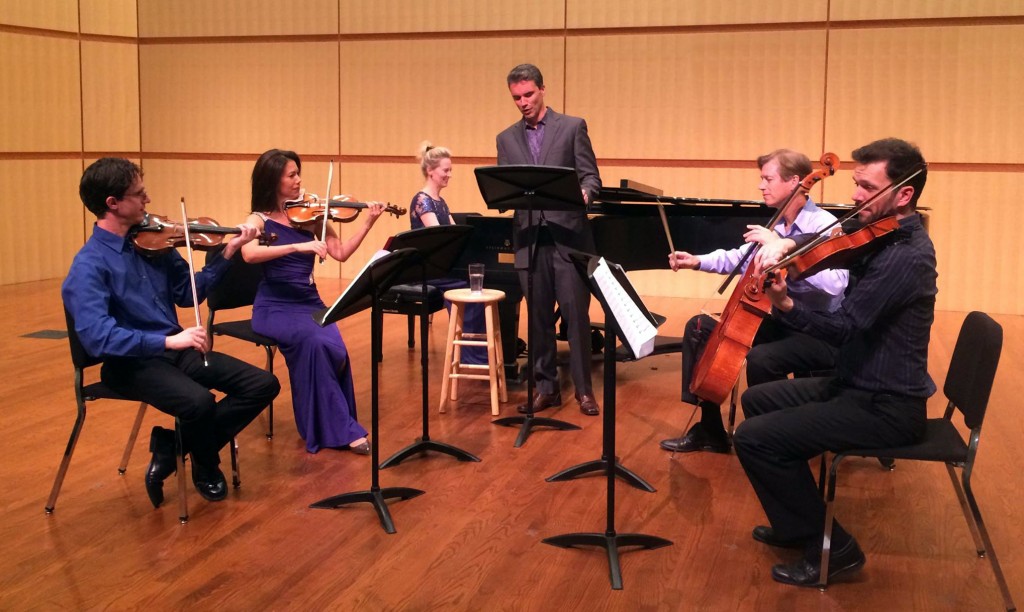 Gabriel Fauré (1845-1924) was a masterful French composer, and is best known for his languidly vigorous and consoling choral Requiem — likely his most performed composition.  His chamber music is exquisitely crafted, but this craft can at times conceal some of the intense emotional arcs that it harbors.  It is surely not for all tastes, and more than most chamber music, is far more compelling in its entirety than as separate movements — the instrumental textures need time to weave and evolve to a suitably elusive harmonic conclusion.  Fauré’s chamber music and songs (mélodies in French) are viewed as the epitome of his craft, and his key gift to the history of art music.

For the second concert of the 2015-2016 Westminster Concert Series, six superb local musicians performed an all-Fauré concert on Monday October 26.  This little vortex of a concert included his song cycle La bonne chanson, Op. 61 and his Piano Quintet No. 1 in D minor, Op. 89.  The venue was the Vieve Gore Concert Hall at Westminster College in Salt Lake City.

The musicians for the piano quintets were violinist Yuki MacQueen, violinist Alex Martin, violist Joel Gibbs, cellist John Eckstein, and pianist Karlyn Bond.  Bond is a member of the Department of Music faculty at Westminster College.  The string players are all members of the Utah Symphony.  Michael Chipman, also on the faculty of the Music Department, was the baritone soloist in the piano quintet version of Faure’s song cycle La bonne chanson,

La bonne chanson is a collection of twenty-one poems from the pen of the French Symbolist poet Paul Verlaine (1844-1896).  They were written to Mathilde Mauté de Fleurville, who at age sixteen in 1870 married Verlaine. Love and nature intertwine and mingle in these poems, and Fauré chose to fashion nine of them into a song cycle that uses the same name.  The piano quintet version with voice of La bonne chanson was arranged by Fauré in 1898; much of the cycle was originally composed for voice and piano in the summers of 1892 and 1893, with the completion following in February 1894.  Fauré was residing in Bougival, France, where he was in love with Emma Bardac, the wife of the banker Sigismond Bardac.  The songs are dedicated to Emma, and last about twenty-five minutes.

For the first song of La bonne chanson, which is Une Sainte en son auréole (A Saint In Her Halo), Chipman’s smooth, slightly rounded tone caught the pensive ecstasy almost slyly.  InPuisque l’aube grandit (Since Dawn Is Growing), the second song, the overall balance and blend between instruments and Chipman was calculated naturally.  The undulating piano line, played by Bond with ease, contributed to the impression of a continuing limpid dream.  For the third song, La lune blanche luit dans les bois (The White Moon), the soft playing of the two violinists molded the dappled balances, with all instruments achieving unity of line and sauntering to the fore and receding intuitively.

In J’allais par des chemins perfides (I Was Going Along Treacherous Roads) the suave poise of all four strings augmented Chipman’s expansive coloring of the vocal line on swelling dynamics.  For the fifth song, J’ai presque peur, en vérité (In Truth I Am Almost Afraid) the elusive harmonies were aptly conveyed by all.  In Avant que tu ne t’en ailles (Before You Go Away) the effusive and supply modulated lyricism was ridden most ardently when needed, especially at the energetically hushed ending.

Donc, ce sera par un clair jour d’été‘s (It Will Be On A Clear Summer Day) rhythmic control was carefully, convincingly, and naturally managed.  In N’est – ce pas? (Is It Not So?) the carefree precision of the pianist and cellist at the beginning was notable, and Chipman and the violist shaded their tones generously.  The ninth and last song, L’hiver a cessé (Winter Has Ended) propelled the quintet and soloist to the ardent summation eagerly sought out and transmitted with the balances of dynamics unified so cleanly.

This was an excellent performance, but I personally prefer a mezzo-soprano rather than a baritone in this arrangement of La bonne chanson.

The Piano Quintet No. 1 followed after the briefest of intermissions (five minutes).  This piano quintet’s composition began as early as 1887, but it was premiered in Brussels in 1906; a second piano quintet was premiered in 1921.  There are also two piano quartets and a piano trio, and a significant quantity of additional chamber and piano music.  Piano Quintet No. 1 has three movements, and lasts approximately thirty to thirty-five minutes in performance.

The first movement is marked Molto moderato.  The clarity and buoyancy to the piano line were readily apparent, and the ebb and flow of harmonies journeyed sincerely and most aromatically.  Brief solo turns by all string players were uniformly excellent, with rustic grace and elegance.  The effusive climaxes maneuvered with gusto, and the Molto moderato marking was adhered to keenly but flexibly.  The horizon evoked by the little hesitations in the instrumental lines near the end met the surreptitious onrush of harmonies with something close to perfection.

The second movement is an Adagio, and MacQueen and Eckstein’s duo at the start seethed with longing.  Again, there was a sense — surely convincing — of yielding affection to the Adagio marking, with form and expression moderated in abundance.  The unity of ensemble in climaxes was again superb in its suavity.  Bond’s pianism was discrete yet visceral, especially in the briefest of interludes with violist Joel Gibbs.  The deeply felt leadership of MacQueen traced the bell-like purity of Bond’s tone and Alex Martin’s rippling and ascetic one.  Most striking of all in this movement was the ever expanding unity of ensemble colors.

Allegretto moderato is the marking for the last movement, with its entrancing, almost trance-like melodic and rhythmic flow.  The ensemble’s control of instrumental color at loud and soft dynamics, and volumes in between, shifted the elusive quest of the lyricism to something palpable and fixed with the utmost conviction in its agitated bounty.

This was a magnificent performance, with compelling touches too numerous to note.

Concerts of music by a single composer are often difficult to find entirely agreeable, as one composer’s style can at times be perceived as relentless despite its mark of genius.  Fauré’s chamber music and songs can pass this test, but they still require a degree of sympathy that is seldom felt.  All six of this evening’s musicians met his musical world with a potion of his spirit as well as their own.  May we have an all-Ernest Chausson chamber music and song concert in the 2016-2017 season?  But we need not fear for the moment, for the maverick American composer Charles Ive’s epic “Concord” piano sonata is set to take the stage on November 16 in the next installment of this season’s Westminster Concert Series.