Blue Notes: Rest assured that Blue Critchfield is not splegiarizing . . . whatever that means 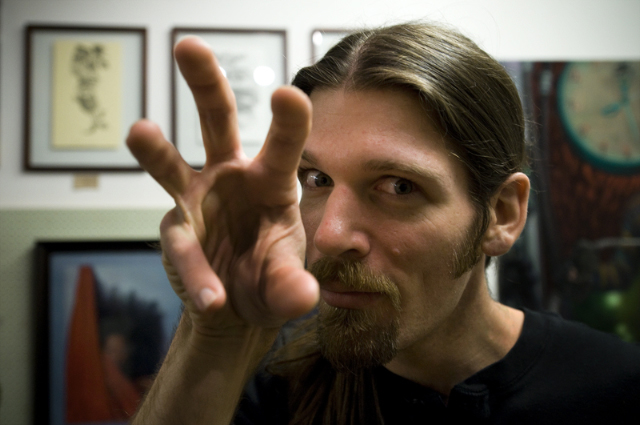 Blue Critchfield in his studio, photo by Jim Stoddard

From the artist’s sketchbook:

“You glanced at an overweight man examining himself in a mirror to see how expensive jewelry looked on him. You thought: paint someone doing something trivial next to someone going through hell … do it.”

“Being a responsible consumer is an important spiritual act.”

“He’s putting the TV out of its misery. He’s sad to see it go because of his addiction. His central nervous system is exploding into solutions.” 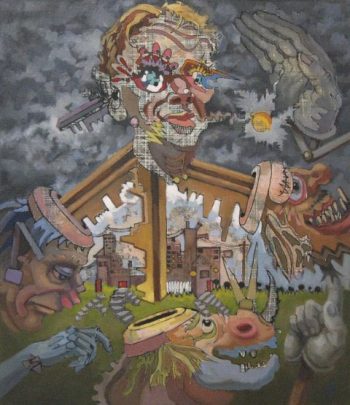 “Do I have to instill a sense of fear in my audience to get them to pay attention?”


When Blue Critchfield offered to lend out his sketchbook for perusal, he may as well have said, “Hey, here’s a key that opens a door into my brain.” Letting it go was risky, but appropriate for an artist who is pointedly focused on authentic communication. His personal definition of success revolves around “creating paintings honestly and thoughtfully,” which, in his terms, is accomplished through relentless honing of both skill and intent. “When I look at a piece of art,” Blue explains, “I think, ok, so what is this really doing? Does this offer anything? Does this say anything? Is it part of some transcendental cause? What is it contributing to society? I think I’m trying to figure out my own worth as an artist. So, while it’s not always fair to place every artist in that context of having a social purpose, that’s what I consider.” 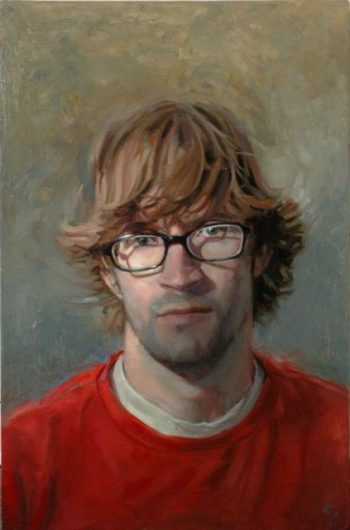 Blue’s thoughts are fleshed-out on the notebook pages in stream-of-consciousness paragraphs and lists, and, of course, drawings: elegant, yet grotesque cartoonlike characters depicted in bizarre positions and dreamlike states of awkwardness, misery, and, sometimes, hilarity. Such loosely developed images are juxtaposed with detailed sketches of real-life subjects, chosen for their particularly expressive faces and mannerisms. The first style is reflected in smaller-scale paintings, such as “Knobheads and Locksmiths,” born of Blue’s musings on the nature of social structures. More realistic, deliberately rendered figures tend to show up on canvas in surreal scenarios, with varying degrees of subtlety and symbolism. 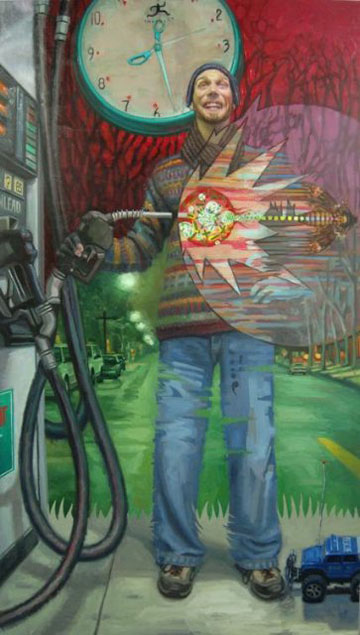 Blue’s works range from the realistic portraits, “Refracted” and “It Is Time,” to abstract compositions that are sometimes sold “as is,” but are more often used as elaborate canvas preparations that peek through representational pieces, as in the jarring, 4′ X 7′ “Ingestion by Susceptible Individuals Causes an Immune Reaction,” painted in layers and depicting a figure maniacally inserting a gas pump into his side; or the smaller, but no less perplexing and amusing portrait, “Rest in Peace of Mind,” featuring a male subject sitting in a grave, with a baby doll on his head, and … well, you just have to see them. Blue is always searching for new ways to create images that are “disjointed, unpredictable, and surprising to the viewer.” 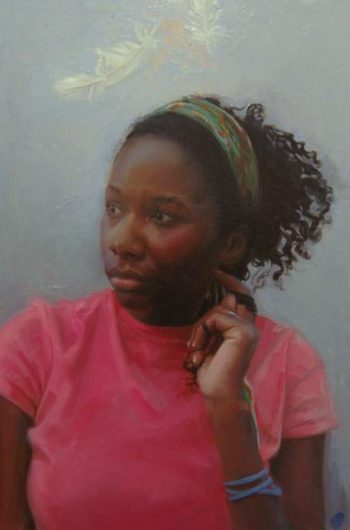 Blue comes by his imaginative nature honestly, having grown up in an especially creative environment. According to family legend, Samuel Blue Critchfield, the youngest of three children, was named through a democratic process. After some debate between his parents and siblings, “Cobalt Blue” was a second-place choice, which may explain the vivid hue he uses to impress fingerprints — in place of signatures — on his paintings today. This was a fitting beginning to what Blue calls a “magical” childhood, spent in a house that he credits as one of his greatest sources of inspiration, on a short list with the likes of Salvador Dali, Thomas Hart Benton, and Jimi Hendrix.

At the southwest corner of Utah’s Heber Valley, Blue’s father, Ken, built a geodesic dome on plot of farmland. Blue lived in the “dome home” through his teen years and speaks of the “elaborate hut” with trademark expressiveness — wide eyes, a broad smile, and animated gestures. Grinning nostalgically, he describes a house perpetually under construction, where, “Every once in a while, my whole leg would jut down into a vent hole and leave me with a scraped shin,” and, “the stairs were very steep and more like a ladder than stairs. If you slipped on them, you were screwed.”

Outside, the family harvested hay and raised sheep, pigs, and even honeybees for sustenance, but while the setting was bucolic, it wasn’t idyllic or sheltered. The farm was designed to foster self-sufficiency while the family explored other interests, including art, music, and intellectual pursuits. For his part, Blue earned good grades, played the bass and guitar, and considered, among other things, a career in psychology. He was also affected by a strong sense of spirituality that permeated his experience within his family, and continues to impact his work and lifestyle today. He describes his mother as “fun, and an always supportive, unending, tireless source of love,” and more “traditional” in her religious beliefs, while his father is “complicated” and practices a “personal form of faith,” including meditation and visualization. Blue says his personal interest in a “higher power” is channeled through a desire to create art that evokes a sense of collective conscience, a recognition that humans are all “connected in a simple, obvious way.” 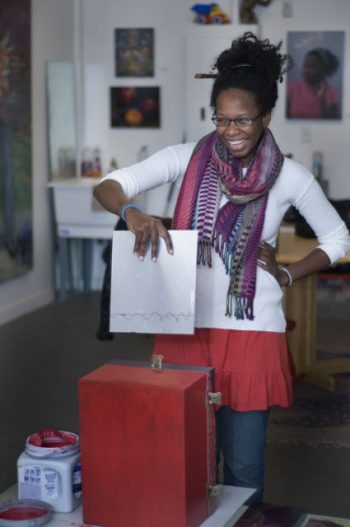 His parents divorced when Blue was eight years old, after which Blue continued to live primarily with his father, who is also an artist. Blue recalls hanging out near the “massive” homemade desk where his dad drew politically charged cartoons for Sunstone Magazine, or worked on a comic series called “Zombie Rehab,” a riff on complacency and government infringement on citizens’ rights. This atmosphere instilled a sense of social responsibility, an “urgency” to contribute something meaningful to the world. When he left home, Blue says that he worried about committing to art because he feared he’d never make a living at it, but, in the end, decided it was worth the risk and entered the BFA painting and drawing program at the University of Utah.

In college, Blue says he “learned the most” from instructors Brad Slaugh, Paul Davis, and John Erickson. He enjoyed sculpture, but ultimately chose oil paint as his preferred medium, because it gave him the freedom to, “explore endless possibilities in a relatively immediate and direct fashion.” After graduating in 2003, Blue found himself in “crisis,” unsure of his abilities and choices. His personal life was chaotic, and he was painting in what he calls an “impressionistic” style that he found unsatisfying. He lacked direction and wrestled with “shyness,” despite his outwardly sociable personality. Then, in 2005, Blue happened to wander into a gallery in downtown Salt Lake City, where he met Erica Houston, a figurative artist who works in colored pencil. There was an instant attraction, and, as Blue puts it, his life was set on a course of “major expansion.” 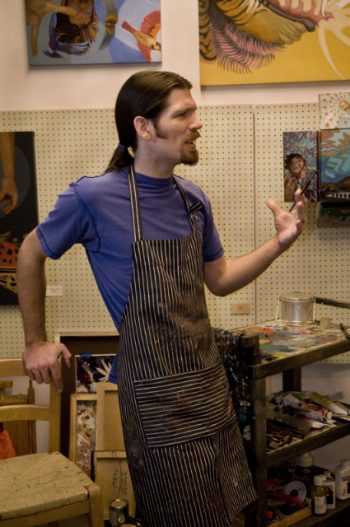 Blue Critchfield in the ArtSpace studio.

Blue and Erica were married exactly one year after they met. Things went quickly, partly because they were intensely drawn to each other, and partly because they were both fed up with bad relationships. They had a long, excited conversation that first night, which was followed with a second, no-holds-barred discussion of their respective life histories and intentions. To hear them tell it, the questions came out like verbal punches: “Are you on drugs?” “Are you crazy?” “Do you have any health issues?” “What about substance abuse problems?” “Do you have any babies?” In Erica’s words, they were each “sick of all the madness,” and were lucky to be looking for the same things, at the same time.

Both Blue and Erica work as part-time restaurant servers, to make ends meet and free up time for art. Their life is centered on their ArtSpace studio, where they work four days a week.|7| This home-away-from-home is filled with books, furniture for visitors, and background noise in the form of rock music (lately, they are partial to Muse and Kaiser Chiefs) or movies played on a small television.

They are attempting to live consciously, by encouraging sustainability through recycling, working with nontoxic materials, avoiding what they see as thoughtless, exploitive consumerism, and attempting to illustrate a sense of human interconnectedness through their art. Blue credits his stable relationship with Erica for freeing up the “brain space” to consider such lofty ideas, saying her presence in his life has “quadrupled” his support base, “at least!” 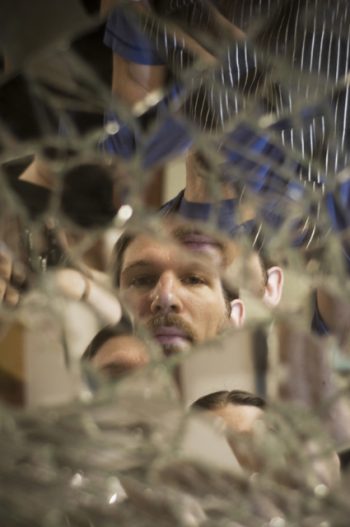 Their studio life is evidence that art is serious business for the Critchfields, but there’s plenty of humor in the equation, too. Scattered between carts loaded with art supplies are toy rats, snakes, trucks, and monsters, along with some of Blue’s more peculiar collections, like shattered mirrors,|8| dead bugs, and a hairy mass retrieved from a sink drain. And, then, there’s “suffixationalism,” a game of wordplay Blue started with a co-worker, which comes up randomly as he speaks. To get an idea of how it works, consider Blue’s remarks on the importance of meaning in art. He says he wants his art to project “something of value;” otherwise, he’d feel like he’d just be “splegiarizing,” which, apparently, means creation without a sense of accountability. He goes on to say that, while splegiarizing can lead to spontaneous genius in one’s work, the world has enough splegiarizers, and he feels a responsibility to do something more. During another freewheeling chat, Blue offers a rather barbed critique of a nationally recognized portrait painter, then follows it up with the self-effacing admission, “You know artists; we’re a bunch of hard to please wank-a-saurs.”

At age 30, |9| Blue feels he is entering a transition period in his life and work. He says that, after years of considering Dali, and the “surrealist” label, he recently looked up the word “surreal” and found a definition containing the phrase, “surreal complexities of the bureaucracy.” That stuck with him, and has helped him articulate what he calls a sense of “everyday surreality” in his art. “What is truly surreal to me,” says Blue, “is that feeling when you’re on the freeway, or at the grocery store, and people are living their lives, going in different directions … and there’s a sudden influx of thoughts; you wonder how the hell things got to where they are now? That, to me, is surreal. It causes me to feel my own mortality, to evaluate my own life and motivations.” This recurring reaction to the absurdities of daily life is what’s on his mind, and what he’s attempting to convey in his art, at least for now. 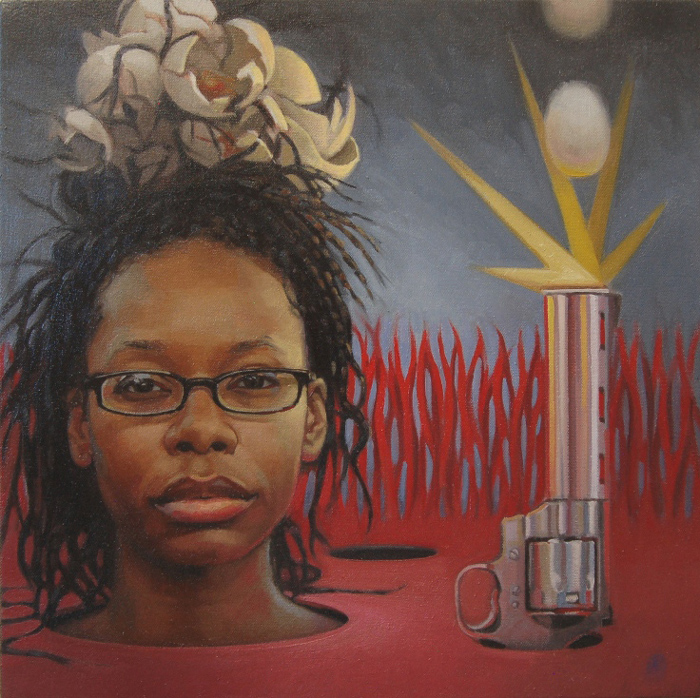 Where is the Yolk, by Blue Critchfield at Universe City

To date, Blue has shown work at approximately 20 group exhibitions, and his third solo show will take place this month at Universe City gallery in Ogden. He will also have pieces in two upcoming Art Access exhibitions this year, and there is surely more to come, since, as he says without hesitation, this is what he’ll be doing “for life.” And, in the meantime, as his Myspace page so eloquently explains, Blue “fillangifies through the trenches of cerebral netheroids.” Well said. 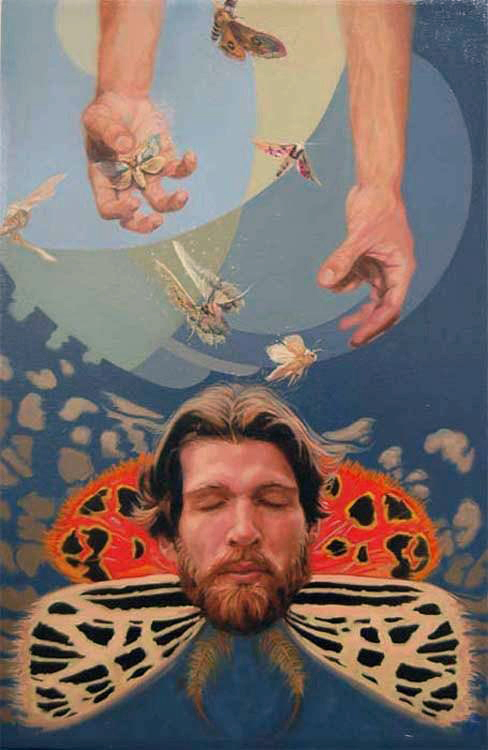 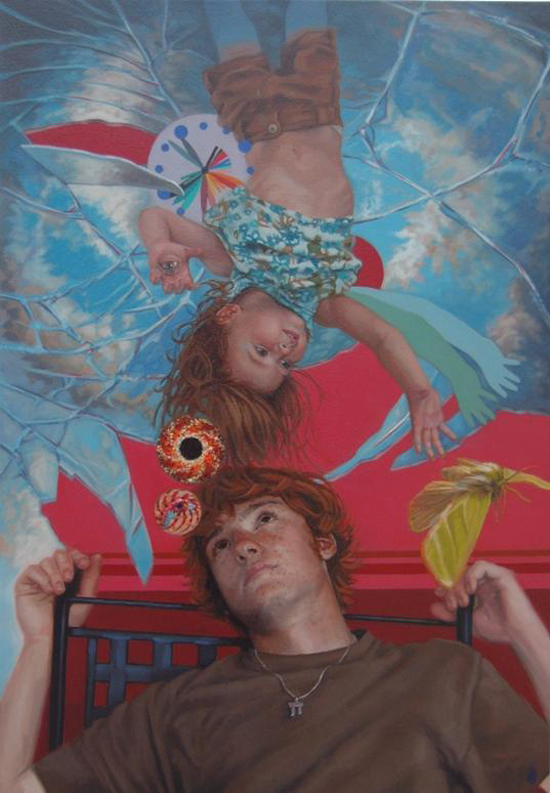