The Blisses and Black Mountain College 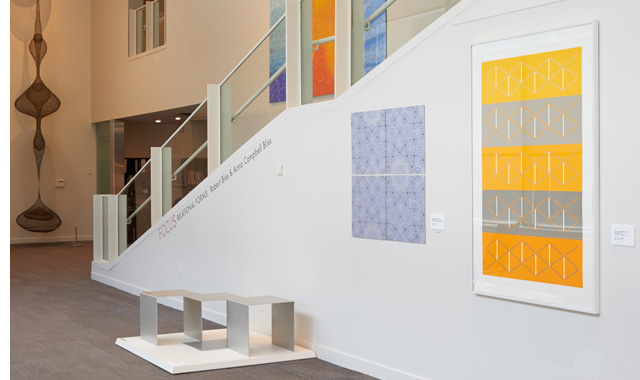 A group of faculty members dismissed from Florida’s Rollins College in the 1930s dreamed of a school where, in addition to excellent programs in history, literature and mathematics, students could take classes in dance from the likes of Merce Cunningham, music from John Cage, get lectures in engineering  from Buckminster Fuller, architecture from Walter Gropius, learn about pottery from the great ceramist Peter Voulkos, study art with Franz Kline, Willem de Kooning, Robert Motherwell and Josef Albers and weaving and design with Albers’ wife, Anni. They wanted guest lecturers like Albert Einstein and the poet William Carlos Williams.

Students would each have their own studio, community work to do and woods to stroll in.

They made their dream a reality in the Blue Ridge Mountains of North Carolina. Cy Twombly and Robert Rauschenberg would one day enroll. Black Mountain College: Shaping Craft + Design is a comprehensive and comprehensible traveling exhibition about the revolutionary experimental  liberal arts college (1933-57) that continues to be influential in education and the visual, performing and literary arts even though it closed 57 years ago.

This absorbing show includes ceramics, textiles, furniture, sculpture, paintings, printed material and ephemera as well as video clips. It is now at the Nora Eccles Harrison Museum of Art at Utah State University through February and has been adapted by curator Katie Lee Koven, director of the Harrison, to include artwork from the NEHMA collection by students and faculty from Black Mountain College. She was assisted in the selection process by museum interns Adriane Dalton and Nick Danielson.
Koven’s connection with Black Mountain started when she was in graduate school in London. Her thesis focused on using Bernard Leach, the British potter, “as a vehicle to explore things marginalized in 20th-century Modernism. And I came across Black Mountain College — while I’m in London. And I’m from South Carolina, so to find out about Black Mountain College [where Leach had taught an important seminar in 1952] when it was just a few hours away was really kind of like, wow this is pretty cool and obviously not well understood or well represented in 20th-century American Modernism history because I didn’t know about it and a lot of people don’t know about it,” she says with a smile.

Bliss was just 17 or 18 when he arrived from his native Seattle to study at the college, at that time located in a large wooden building surrounded by small cabins owned by the YWCA, which took possession back in the summertime. Faculty lived in the cabins and male and female students occupied different floors of the large structure, he recalls.

There were two courses you had to take at Black Mountain College, Koven says.  One was a course in the classics, and one was an arts course, a foundation course, with Josef Albers. The latter was Bliss’s first class at the school. “Albers’ favorite expression was ‘open eyes’ – look, look,” he remembers.  “And we would go to junkyards or into the woods and it combined all Albers’ ideas about color so there was a heavy amount of that and he was also teaching drawing and painting.” There are examples of works of fallen leaves from visits to the woods in this exhibit.

In 1940, the YWCA wanted their buildings back year-round and the school found 600 acres across the valley that included an old summer camp which could be adapted for use by the college. “Walter Gropius and Marcel Breuer designed a facility for the new land and the estimates came in much too high and the community couldn’t afford to do it,“ Bliss says. Those plans are on exhibit.  Another architect volunteered his design work on some structures that could be done economically and a work-study program was initiated of classes in the morning and building work in the afternoon. “And when we moved over to Lake Eden, that’s what I did,” Bliss recalls, pointing to a photograph. “This is the building I nailed a hundred thousand nails into. It was the only building they were able to get finished before so many of us, me included, left for the war.”

Bliss remembers monthly community meetings, where students and faculty discussed finances, the direction the college was going and how to attract more students, because prior to the arrival of Albers, whose presence was good for enrollment, there were not more than 25 or 30 taking courses. Still, in 1949, after he had been at the college for 14 years and was away on a fund-raising trip, the community voted Albers out. It limped along for another seven years or so and folded. Albers became head of the art department at Yale.

“It was a very, very stimulating, energetic education,” Bliss says. “After the war I finished up at MIT. It was like going into a factory. And that’s where I met Anna Campbell Bliss.”  She had earned a bachelor’s degree from Wellesley College and was working on a master’s in architecture from Harvard University’s Graduate School of Design.  She would later study color theory and design with Gyorgy Kepes at MIT and with Josef Albers.
“His roommate was in my class at Harvard,” says Anna. “And he invited me for dinner one night. So that’s when I met Bob — and we went home together.” NOT, says Bob. “We went back to the drafting room so you could put me to work,” he insists. “And I was hooked.” That was 64 years ago.

The Blisses, who moved to Utah in 1963, have their own exhibit – just the second time their work ever has been shown together – in the lobby of the Harrison. Relational Forms: Robert Bliss & Anna Campbell Bliss highlights several furniture pieces designed by Robert Bliss with a number of paintings and prints by his wife. Other work by Robert Bliss is included in the show in the main gallery: one vital piece being “Lady Murasaki’s Fan,” (1993) an elegant chair (30 x 37 x 24 inches) replete with black suede cushions. It has 32 teak legs and only one bolt holding it together.
His arresting modern designs are intentionally practical as well as beautiful. A set of three aluminum cube tables (11 x 11 x 11 inches) in the lobby begs to be used as well as looked at. One longs to stretch out on his Deep Cradle Rocker (1991) (1/4” aluminum & French Bridle Leather 12 x 26 x 84 inches) on a granite base, even though this one resides in the Smithsonian.

Robert says he is delighted that “Anna enhanced my furniture show with her art.” In fact, it is remarkable how well their pieces work together. Her work makes connections between mathematics, computer science and art — and is ultimately about color. His is all metal, wood and leather.  Yet there is a “marriage,” if you will, perhaps of minds, a connection that is tangible as you walk through this exhibition.

The show is hung well, with Bliss’s large and captivating 2010 Element Series (screenprints on handpainted oil on canvas) “Waterwall,” “Firewall,” and “Windwall” high on the staircase and smaller pieces in the lobby itself. Her important 1973 “Triangular Articulation, Series II” Variations A B & C is tucked away into crevices, however, and easy to miss – look for these. It’s a series that will give you an immediate appreciation of color theory.
Bliss said she was a “little bit sick” that she hasn’t been able to get new work done. “But I put pieces in the show that are of the era of the Bauhaus, things that related.”  And they do, nicely.

A newer work, but with the flavor she mentions, is 2002’s superb “Topkapi Palace Study” – four screenprints on anodized aluminum with “a slightly Oriental feeling, an Islamic feeling,” the artist says.

Robert Bliss maintains that the only connection Anna Bliss has with Black Mountain College “is through marriage.” But Koven says his wife was included “because we have a couple of pieces of Anna’s in our collection and she has taken classes from Josef Albers. “ She points out that there are many connections to be made here: “The Blisses were quite close friends with Josef and Anni Albers and they were also friends with [sculptor] Ruth Asawa whose work is in the same space as their works are being shown.  But there are a lot of connections that one can make between Anna’s work from a standpoint of her formalistic approach to design, her interdisciplinary interests between computer science, math and art as you find in a lot of works that you see in the Black Mountain College exhibit. . . . And then to see her work juxtaposed beside her husband’s work and his ability to explore material in a very sort of formalist beautiful kind of way with the form following function in a lot of ways but making aesthetic choices like the kind of leather being a saddle leather from France that was specially ordered so that he could get a solid piece of leather for that lounge.

“So I’m hoping that people make connections between the Blisses’ works and how they have been together for many years — being now in their early 90s — and also their relationships to various faculty and students who were at Black Mountain College that they knew throughout their lives.”