Between Wind and Water: The Recollections of Eva Jorgensen 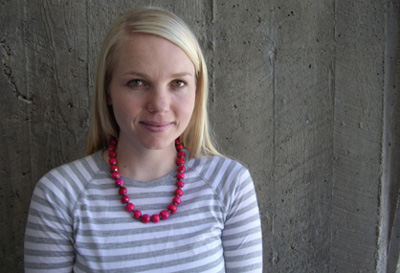 Eva Jorgensen is an artist in motion. This month she will complete her fellowship-fueled post-graduate program in printmaking and add an M.F.A. from the University of Utah to her B.F.A. from B.Y.U. Then later this summer she moves to Ohio, where her husband will study Slavic languages. Utah residents can hope she will soon return to the community her art memorializes and that in turn feeds her art. With two substantial forays in three months—a group show at the Rio Gallery (I am you @ the Rio) and her M.F.A. exhibit at the Gittens Gallery—Jorgensen offers a comprehensive view of her original approach to prints and portraits. It’s a good time to take a close look.

We make a mistake when we assume that the characters in novels and films are always based on the authors and actors who bring them forth, but Eva Jorgensen’s goal in constructing portraits of the people who make up her community is precisely to locate her identity in relation to them. In playing with various ways of printing their images she turns conventional photographs into complex and increasingly sophisticated group portraits.

Jorgensen’s sprawling group portraits are grounded in experiments with the vocabulary of traditional printmaking. These prints are essentially scenes from narratives known in detail by the artist, though as she “tells” them each story acquires a resonance of wider meanings. Rather than draw everything she wants to represent in a unified hand, she selects many of her images from the rich trove of images already in use and freely mixes representational styles. This works for her in two ways. First, the objects she represents already feel familiar, and bring with them a trailing wake of associations and memories. Second, the misalignment between these elements, both visually and in the mind, calls attention to the artifice of representation and the true nature of memory, which is creative and depends on our imaginations. 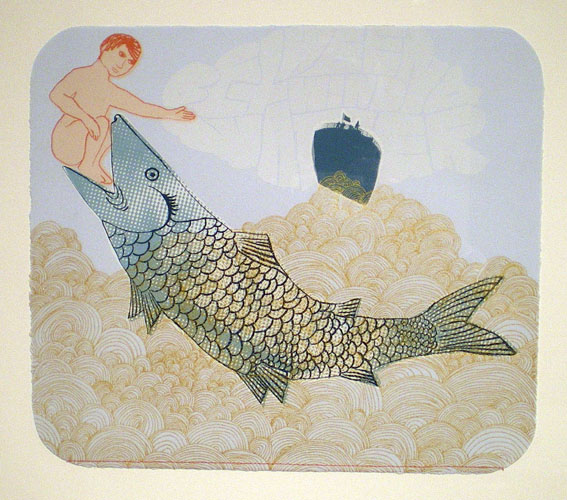 “Between Wind and Water”

This strategy in itself isn’t new, and “Between Wind and Water” adds little to it. Here a highly stylized sea roils beneath a single cloud made up of the title phrase lettered like a concert poster from the 60s. A ship’s stern cut from a photo pitches at the point where sea meets sky. Closer to the picture plane a large fish, its scales so many Benday dots, flies clear of the water, carrying in its mouth a crouching boy outlined in red, his flesh a uniform pink. This could be a modern Jonah, perhaps expressing the artist’s anxieties about a missionary in her circle. Uncertainty in how he is represented highlights his ambiguous identity and the uncertain elements of his story.

In “William, It Was Really Nothing,” different techniques separate the parts even more, making them more coherent in the mind than the eye. At first one sees the long, low forms of dead warriors from the Bayeux Tapestry rearranged into a landscape of dead medieval soldiers. The title, embossed colorlessly in the sky, seems written on the wind. Only a close examination reveal the ghostly sailing ship, printed in white on the only slightly off-white paper, that fills the rest of the space and turns a landscape into the gently swelling waves of the sea. That ship and sea exist in separate levels of reality—or more accurately, unreality—underscores how our voyages in life, romantic escapades and dull drudgeries alike, travel innocently over the bodies of the dead. The image is serious, yet playful, and embossing, printing in ink close to the paper’s color, capricious juxtapositions, and confectionary colors are among the artist’s rhetorically significant devices that one learns to look for and anticipate with pleasure. 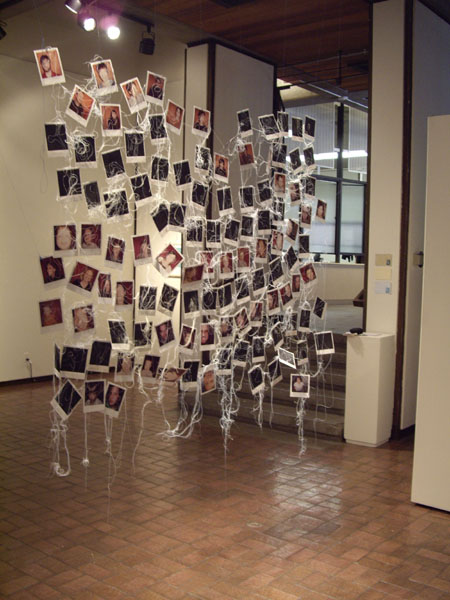 Jorgensen invokes the sea frequently: references range from pictures of ships and nautical charts to old engravings of whales and mermaids, and include a seascape in which the fragmented California coastline stands in for offshore breakers. It’s a connection that began during the first fourteen years of her life, spent on the shore of the Pacific Ocean, and took on new meaning a dozen years ago when her family migrated east to one of the few places where no river runs down to the sea. In another sense, though, her nautical theme began before she did. Her grandfather, perhaps the most important figure in her iconography, was a sail boy who went to sea in Norway but came ashore in the United States. His contribution to her identity is memorialized in one of a series of recent group portraits with the overall title re:COLLECTION.

“Marfam,” which takes its name from a Norwegian word for grandfather, is the only re:COLLECTION named for a person rather than a place. “Heber” and “Provo” began as photographs that she printed in a heavy dot matrix, in colors and on paper that read ambiguously as positive, negative, or blank images depending on the viewer’s position. Connections between them are suggested by arrangement on the wall, or by sewn lines that cross the faces in loopy contour lines and continue from one to the next until they bind the group together. In “Marfam,” columns of names are written by hand on sheets of handmade paper that have been stitched together into one giant page that hangs like a well-worn sail. An entire family descended from one ancestor emerges from the sum of the stitches, which form a large image of a full-rigged sailing ship: not tattered like its component materials, but sailing majestically before the wind. Just as genealogy is part of history, Jorgensen’s personal history is inseparable from the lives that have surrounded and nourished hers, and she combines their individual faces and names into choirs of identity. Throughout, Jorgensen’s bravura approach to mediums allows her to embrace her experiences without sacrificing the aesthetic distance that lets her comment simultaneously on her relation to them.

Re:COLLECTION takes Jorgensen from relatively straight prints to assemblages the cover walls or hang in a room, occupying space and giving her portraits a sculptural dimension. This elaboration climaxes in “Family,” a work that locates the artist’s identity in the common sorrows and reciprocal obligations of her extended family. Six handmade books stand on separate pedestals, each cover printed with a face photographed so closely and so severely cropped it is difficult to identify—a sometime metaphor for our most intimate relationships. The pages seem blank, but on inspection bear traces of evidence: handwriting pressed into the paper as though accidentally transferred from the page before. Each is in a different handwriting, but the text is the same:

(A young woman) was in love with a young man and she, when he was going abroad, drew an outline on the wall of the shadow of his face thrown by the lamp. 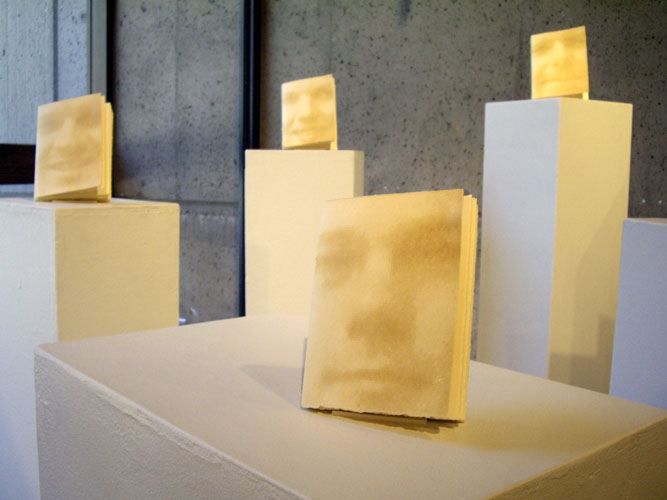 The last page credits this sentence to Pliny the Elder and explains its significance: “It presents the mythic moment when imminent loss drives the impulse to record and remember.” At the bottom, below the names of the family members she tasked with writing out Pliny’s words, she adds, “They are my family and I am leaving “Family,” then, is the memorial of a moment of parting: a moment of loss that is also a moment of becoming, for these books will also recall the moment when her mastery of printmaking was acknowledged.  Yet Pliny’s story, while it tugs at the heartstrings, was not primarily romantic. The old Roman, who died directing his fleet of warships in the rescue of survivors from Pompeii and Herculaneum in 79 A.D., wanted to explain the origin of drawing, which he believed was invented by the daughter of a Corinthian potter as she traced her sweetheart’s silhouette. He then tells how Apelles, a Greek artist known only through copies, could draw a line so exquisitely that it unmistakably identified its maker. These anecdotes seem quaint, but they helped set Renaissance standards of art, and in the 21st century they are once again in use to illustrate critical theory. In essence, by bringing Pliny into her MFA show, Jorgensen simultaneously celebrates an epoch, measures love, expresses grief, and brings one of the truly big guns to the defense of her whole range of denotative and expressive lines, whether printed, embossed, or sewn on her grandmother’s sewing machine.

“Illustration” is a dirty word in modern art. Formalism, the dominant prejudice of the last fifty years, wants images to come into being from their own necessity, not in response to pre-existing cues. But Eva Jorgensen’s matches material freedom with conceptual courage, and calls her multi-media collages “illustrations to folkloric impressions of people in my life.” Not only do they come from life, but she hopes they will return to life and take a place among the living, bearing witness to her being and her identity. There is an exquisite tension between the desire to disappear into something bigger than one, like family or community, and the will to be oneself. Like all good dilemmas, it cannot be resolved except by living with the process. At the Rio Gallery in May, the dozens of portraits that comprise “re:COLLECTION (Provo)” were woven into a firm web by the tangles of threads that connected and supported them. But in the Gittins Gallery, some threads are broken and some individuals have slipped to the floor. The deliberate change argues the artist is older, wiser, and her sense of communal versus individual identity is changing. It also suggests that Eva Jorgensen will continue to grow as an artist deserving careful attention and as much work as one may choose to devote to unraveling what she weaves. 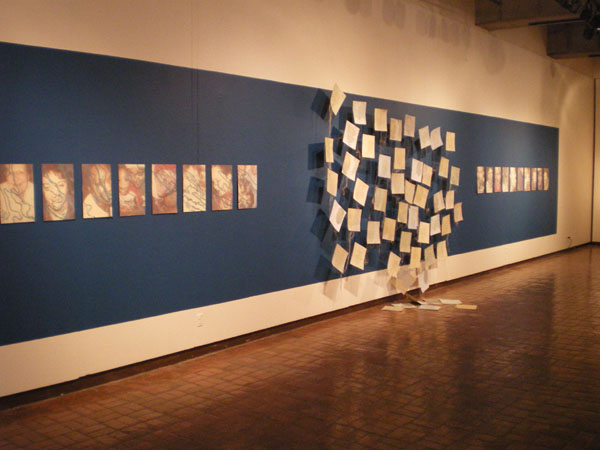