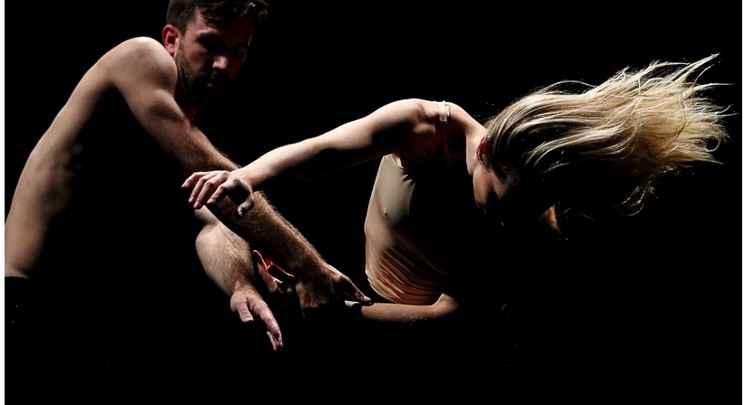 They slowly but confidently adapted their grip. As their fingers looped and laced the two dancers created a visible and kinesthetic bond. As dancing separated them, the pull they created in that first moment worked like gravity, connecting the two throughout their collaborative duet, BRACE.

For one night only, Art 270 in Salt Lake City was home to BRACE. The gallery offered a deep channel for the highly physical movement of the two dancers, as well as a view of Eleanor Cox and Jon Yerby, who adapted music by Arvo Pärt for classical guitar and cello. But there was also information in the distant periphery. As the grounded movement unfolded, there were the pedestrians, TRAX trains, cars, and the noise of a summer night. External information was obscured by window panels but still served as a counterpoint to choreographed movement and sound. There was such an amplified intimacy between the two dancers and the depth of live music that the fleeting action outside placed the material in a sculptural sense of relief.

With a run time close to 15 minutes, the apparent objective to explore physical strength as a buoy and source of connection was met and exceeded. But the brief duet also lends itself toward commentary on the show as part of a larger landscape of Salt Lake dance. The two dancers have a somewhat special platform because of their relationship with Ririe-Woodbury (Bradshaw is still a company member, Beakes departed at the end of this past season) and BRACE works in part because of the long-term physical connection of its choreographers. If you dance together every day, in wide-ranging repertory, distilling how you might make something is readily at the surface. Knowing how to partner, seeing movement possibility, having trust — it’s all more readily at the surface. Further, the audience was primarily fellow dance-makers, performers and Ririe-Woodbury patrons who were each prepared with knowledge about the capacity of these artists and ready to give their best energy toward the labor of love that BRACE has become (an injury delayed the original premiere and now it also serves as a farewell for Brad who will join the Limon company this fall).

Some of these benefits are hard to come by for local peers, as it’s different to find time to move together daily outside of a traditional company model. But the payoff for this work was so clear that it poses questions about whether longer-term process could become a priority beyond some of the things peer artists more frequently consider in contemporary contexts (video reels, performance hashtags, fleeting funding streams).

Although BRACE had access to some of the benefits named above, Beakes and Bradshaw also share the same struggle of needing to build new work from the ground up. They, alongside all of Salt Lake’s independent makers, are part of an ongoing search for venues, temporary use of technical equipment and funding to support a rehearsal process and performance. For independent artists it’s like beginning again with each new work, not only creatively but administratively. BRACE problem solves deftly by having a willingness to abandon the expectation of evening-length material, deal with informality and, also, play upon the desire for a performance to be, above other things, a mode of social interaction.

This review is co-published with loveDANCEmore.org.