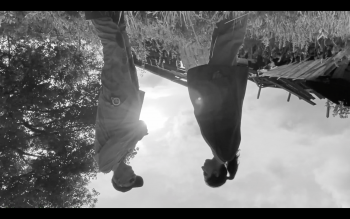 Office Space is glad to present Bea Hurd’s first solo show with our gallery in both the Salt Lake City and virtual spaces with a single cinematic video art piece entitled “Corn.” This film is directed by the artist themselves and produced by Alexandra Juhasz and inspired by their time at the 2021 Art Farm residency in Nebraska. This landmark exhibition coincides with the expansion of Office Space into Los Angeles to form Office Space Burbank as well as our first show as an official New Art Dealers Alliance (NADA) gallery member.

French post-structuralist and feminist philosopher Hélène Cixous stated that, “For us, eating and being eaten belong to the terrible secret of love. We love only the person we can eat. The person we hate we ‘can’t swallow.’ That one makes us vomit. Even our friends are inedible. If we were asked to dig into our friend’s flesh we would be disgusted. The person we love we dream only of eating. That is, we slide down that razor’s edge of ambivalence. The story of torment itself is a very beautiful one. Because loving is wanting and being able to eat up and yet to stop at the boundary. And there, at the tiniest beat between springing and stopping, in rushes fear. The spring is already in mid-air. The heart stops. The heart takes off again. Everything in love is oriented towards this absorption. At the same time real love is a don’t-touch, yet still an almost-touching. Tact itself: a phantom touching. Eat me up, my love, or else I’m going to eat you up.” Similar to Cixous’ uncomfortable merger between eating as a form of erotic cannibalism and gender fluid bodies in both pain and pleasure, Hurd’s work Corn. becomes the locus for the critical discourse navigating amongst multiple genres ranging from body horror inspired by New French Extremity tropes to 1970’s soft core pornographic films to self-exploratory queer theory regarding acts of transgression.

According to the artist, “Corn. illustrates their time at residency through an abstracted lesbianic/les-bionic horror lens. Finding themselves in a ramshackle mansion with five other queer women surrounded by corn fields on all sides, it was made clear the dissonance between the art residency and the state it inhabits. While Nebraska is a conservative red state, Art Farm has formed into a queer anticapitalist artist commune. Corn. explores themes of sexuality, queer anti-capitalism, reproduction, decay, and absurdity.

Corn. also explores the materiality of film, both in its switching from the male to a queer female lens, and through the constant self-reflexive moments that remind the viewer they are watching a film, and not reality. Through the pervasive materiality of the film, a parallel of the constructed utopia of the residency is created. One that reminds the artists, that this lesbian paradise is hidden behind the corn. One that blocks recognition of the outside world and happenings.

The film takes a childlike, innocent stance on sexuality. One, that though is evident in its physical interest of the female characters, remains under a cloak of curiosity, naiveté, and self-exploration. Rather than building the characters as explicitly sexually driven, they are left in a state of primal needs and curiosities, obfuscated by the heteronormative world around them. With this, Corn. aims to explore the constant growing pains felt by the female queer community, its necessitation of ‘artificial’ communities, and a naturalistic exploration of queer behavior.”

One could argue that the interconnection between queer theory and body horror is tied to the marginalization of the physical which is not rooted in traditional Western aesthetics. Hurd examines their relationship between the devouring aspects of consumerism and the vampiric nature of the chemistry of mass processed foods which contain the commonplace ingredient of high fructose corn syrup. After all, corn becomes this rather sinister and extremely pervasive material which appears within so many foods, even ones which do not seem contain any type of corn at a glance. The opening sequence of Corn. suggests that the conflation of corn and blood in close relation to ritual within a lesbian colony which has its roots in radical 1960’s to 1980’s feminist praxis which excluded the presence of the male body, particularly in prominent examples such as the Ovulars in the Pacific Northwest as documented by Carmen Winant or even back to Charlotte Perkins Gilman’s conception of Herland back in the early 20th century. Hurd’s wavering between fantasy and reality within this artificial laboratory set within the confines of an art residency that becomes reframed as a queer post-capitalist environment pointing into the direction of queering the genre of science fiction particularly in relation to the acts of self-transformation and the speculative bionics of the gendered body.

Thus Corn. becomes a strong step towards a reified utopia of a lesbian-based society that is rooted within a quiet yet reaffirming revolution against the patriarchal.

Bea Hurd is a Salt Lake City based artist who predominantly works in soft sculpture made from found and unconventional materials. They received a BFA in sculpture from the University of Utah.

Bea’s practice centers on the interconnections of sexuality, gender, and consumerism. Their work is materially based and derives its meaning from the items and materials chosen to be worked with. They take inspiration from materials of everyday life that tend to be discarded or seen as less than.

They have shown work at Finch Lane Gallery, Nox Contemporary, The Springville Museum of Fine Art, and the Bountiful Davis Art Center.