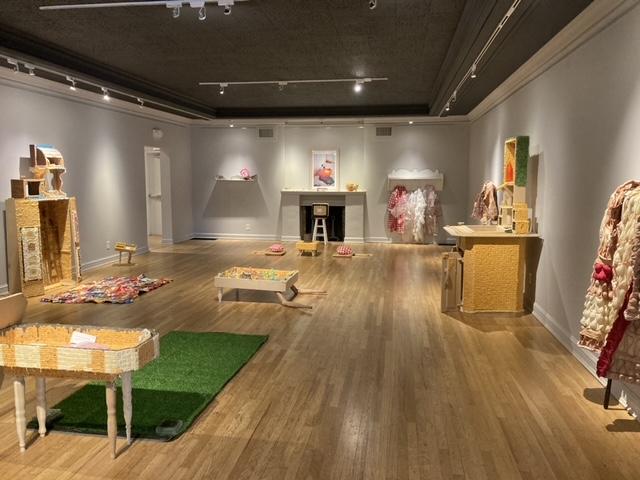 Bea Hurd’s Devour Digest Devote and Lucy Fairchild’s Enveloping Calm awaken the carnal instinct of consumption and desire in a journey that resolves itself. The exhibitions bridge the material and spiritual worlds respectively, through independent journeys that divulge the viewer’s assumed self-indulgent narcissism. 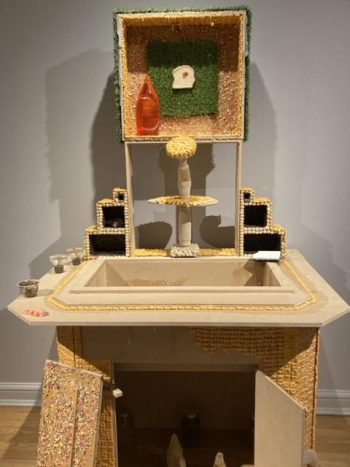 Hurd’s grotesque presentation of material is literal, reinforced by the objects themselves and the way in which they are curated to the viewer’s pleasure. The artist relies on consumable materials as her medium of choice: cereal, crackers, sugar, syrup and eggs.  The quotidian fare, while also staples in the American diet, are repurposed as everyday objects: tables, chairs, kitchen sinks and jackets. The enterprise is thus inherently meta, where consumable, everyday, material objects are constructed of sustenance.  For example, Hurd’s “Kitchen Sink” appears life-size in front of the viewer, complete with sponges, soap, empty cups, and food waste in the barrel of the sink.  The object itself (though perhaps lacking a plumbing apparatus) is theoretically consumable — or useable — by the viewer. And yet, it is constructed of consumable foods — specifically processed snack crackers: Goldfish, oyster crackers, Cheez-its, and sprinkles cover the surface of the sink. Furthermore, the allusion to processed foods hints at the consumable nature of American life, and the chemicals used to make foods’ perishability last longer. 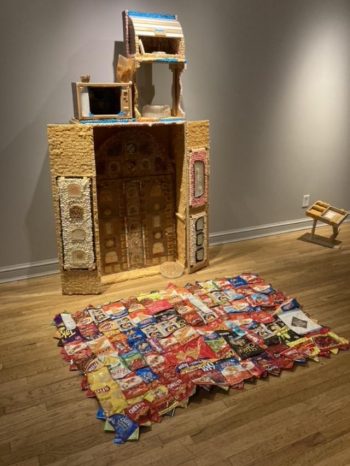 At first glance, Hurd’s carefully curated objects present themselves as a utopian conglomerate of color.  However, Hurd takes the narrative a step into the grotesque. In a Candy Land-esque posture, Hurd has attached processed cereal, crackers, and other snacks to the entire exterior of early modern and contemporary-style furniture. This idyllic concept becomes distorted in practice, when the resin used to encase the material to the object leaks through the spaces between each individual cracker and spills through the pores of the cereal. The result is a misshapen object covered in expired food, its age demonstrated by the yellow-tinged resin.  The resin also renders the food inedible, resulting in an object that fulfills a utopian edible cottage, but has been left to rot. Perhaps paralleling the nature of the consumer as mentioned above, the resin calls to the chemicals used to process such fare.  Underscoring the grotesque throughout the exhibition, Hurd has scattered cheaply made AstroTurf throughout, still marked by creases from when it was folded and processed for shipping.  Poignantly, a patch of AstroTurf rests in the middle of the exhibition space, just after the artist’s poetry meditation on her use of food in practice. Alongside this, relics of decay and use are seen as well. On various surfaces and walls, Hurd has stuck chewed pink bubble gum, opened sleeves of crackers, images of splattered liquids, and one large, resin-encased gob of snack food made unrecognizable. Hurd’s objects are not labeled. Unintentional or not, the absence of labels tactfully removes her objects from a setting of contemplation and observation (such as that of gallery) into a space of labor, of use and of degeneration (such as that of the material world).  It is the details in the curating that reveal the underbelly of the American consumer culture and speak to the inherent narcissism of the viewer.

Taking a step into the back gallery, the viewer leaves the organic forms of Hurd’s objects for a sterile, minimalist presentation of Lucy Fairchild’s photographs. Presented as uniform grids on the walls, Fairchild’s two-foot-by-three-foot framed photographs impose upon the viewer. Each image depicts a pairing of animal and food, as indicated by their titles: “Dogs & Peppers” (2020), “Lamb on Yellow Cake” (2020), “Horse & Lemons” (2020).  Each composition is congested with the material and consumable: foods, animal figurines, flora, bowls, kitchenware, beads, candles and tablecloths.  And yet, within the juxtaposed compositions repeated artistic elements create rhythm and unity. For example, in “Animals & Potatoes” (2019), the round, bulbous shape of the pigs’ bellies is echoed in the small potatoes, which are further found in the short, wide and round teacups that flank the central composition. In addition, the works create a distinct play on allusion and perception.  The “animals” in each composition are not real but instead, plastic or glass figurines. And while the foods are “real” it is impossible to understand their reality when they are presented as two dimensional photographs. 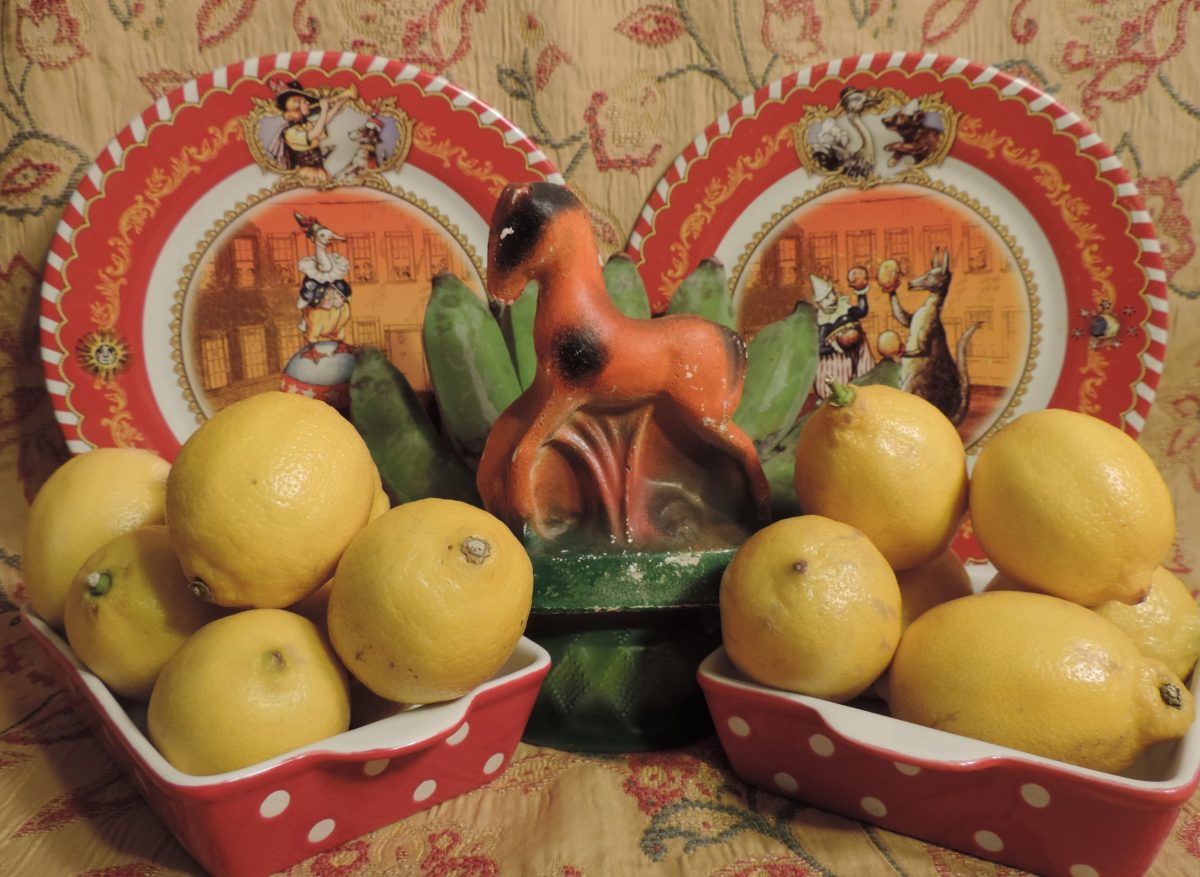 But it is this intentional slip in realistic presentation that is at the crux of Fairchild’s work. The artist presents these objects to the viewer as objects of worship, with each composition mimicking a Catholic shrine. Flesh is presented on a pedestal adorned with beads and porcelain furnishings, decorated and curated around fresh vegetation. However, Fairchild is able to remove the material elements by presenting each shrine as a two-dimensional photographed object.  The essence of the cakes, peppers, lemons and potatoes are not sensibly tangible to the viewer — instead, they become a spiritual meditation.

The conversation had between Hurd and Fairchild’s work is one of material and spiritual, consumption and restraint, excess and control. Hurd’s narrative is one of superfluity and gluttony based within the material realm.  And while Fairchild’s shrines acknowledge these elements present within the consumerist’s life, her critical introspection turns the material objects into vehicles to the spiritual (or, spiritual vehicles). 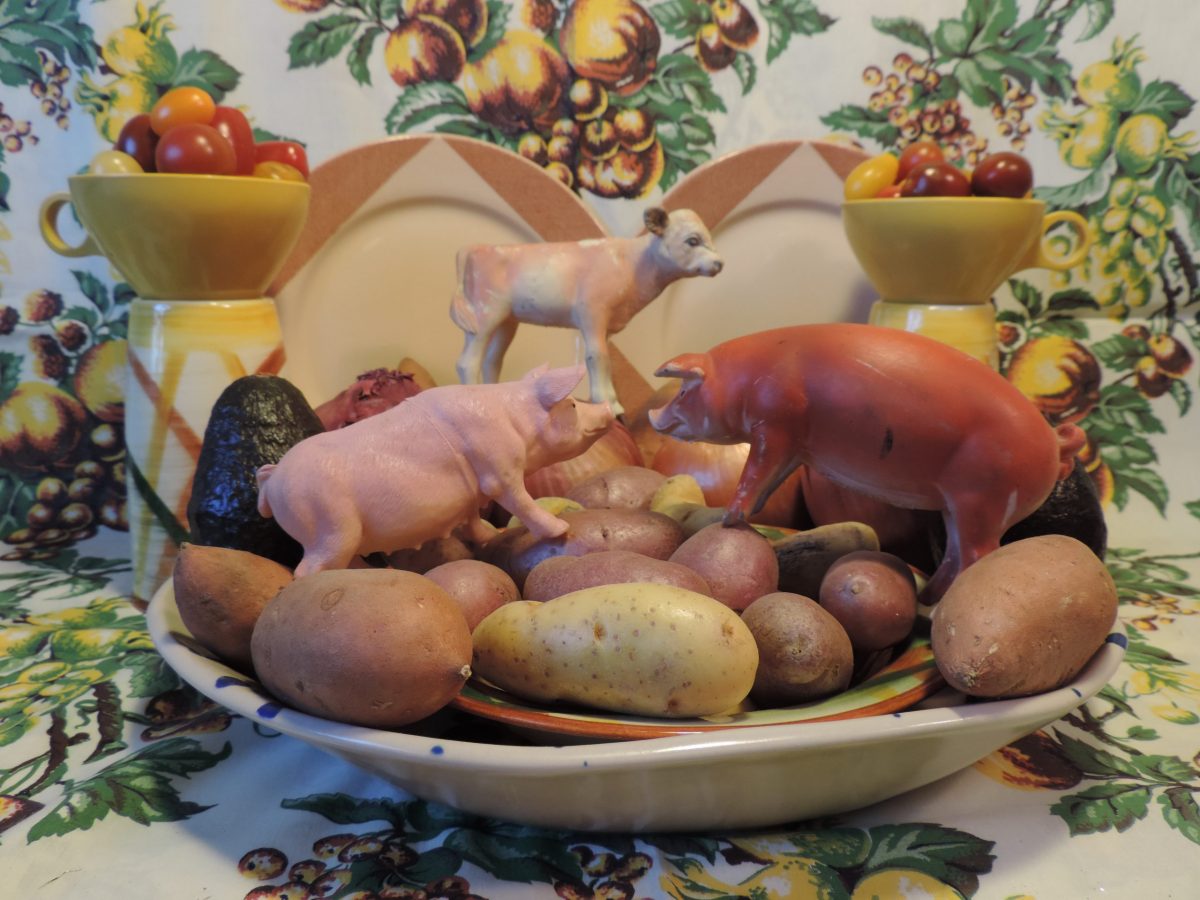