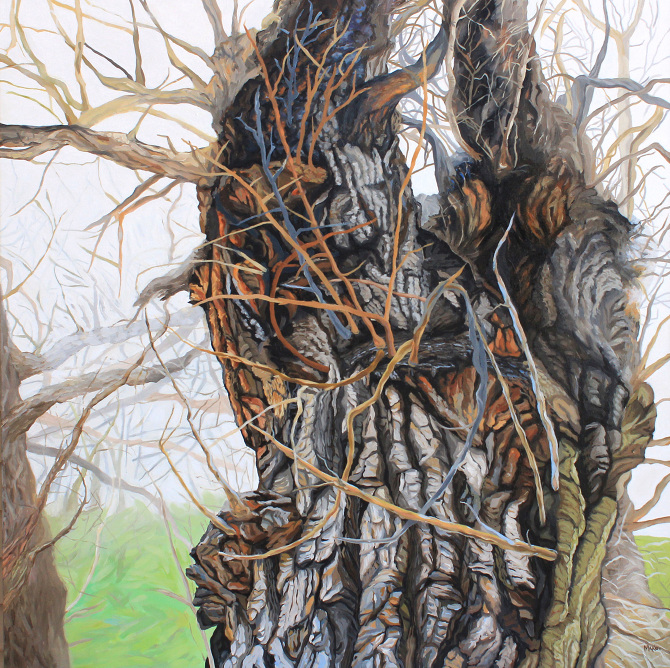 Author, master printer, multimedia artist and Weber State professor, Susan Makov was among the first artists to sound a warning about the plight of the natural environment, depicting things in her prints like birds beset by the trashy artifacts of human overpopulation. It fact, she arrived so early on the scene that instead of calling it “global warming” or “climate change,” she still spoke of “ecology,” a branch of biology invented a century earlier to study, for the first time, the relationships shared by living things in their environments: not as isolated individuals, but as networks wherein they influence each other. As an artist, Makov is the real deal: a visual poet who gathers images in her unconscious mind, then combines them into compound aesthetic statements in her dreams. She then recollects these in daylight as images that challenge us, her audience, to contemplate their meaning and purpose. Her two forest scenes in BDAC’s 47th Statewide, “Looking More Deeply” and “Tree With Green Fields,” present the truth about trees in the forest, captured in atmospheric oil paint portraits. Through her eyes we see them not as so much lumber waiting for human exploitation, but as the shaggy wonders they are: spellbindingly rich and complex ecologies, each tree and each forest a universe built over time by the multitudes of creatures who inhabit them.

Another view of nature, even more defiant of the bucolic, park-like version, emerges in “To Be Drowning In A Forest,” Rowan Forsyth’s ragged and disorderly ceramic vessel. In this portrait, possibly of a dry pond, the unglazed clay admits to its origins as mud, alongside the roots, leaves, and other vegetable matter it so skillfully mimics. The Statewide exhibit’s juror, Nancy Rivera, not only admitted this vision to the show, but gave it an award to call attention to how it expands under scrutiny. Invest a little time in it and it becomes a vision of life and death, found together in one small corner of a forest world. 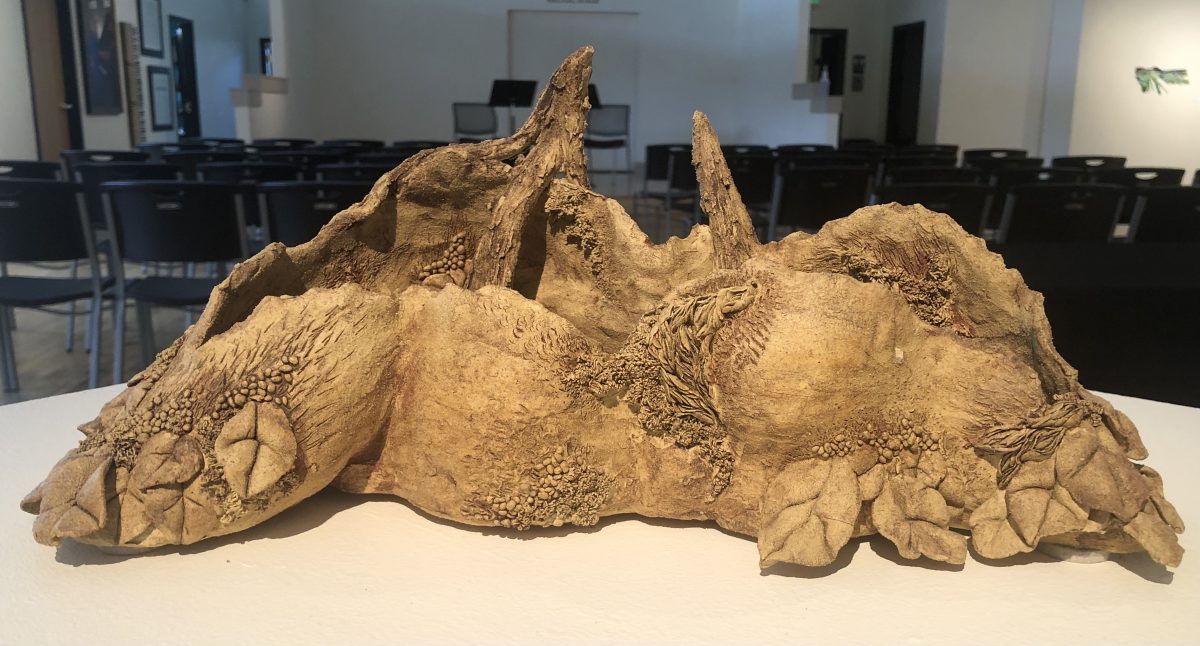 “To Be Drowning in a Forest,” Rowan Forsyth

In addition to Forsyth, Rivera accepted two dozen artists into this 47th Annual Statewide Exhibition at the Bountiful Davis Art Center, with close to thirty works among them. The quality and number of submissions would have allowed more, but along with the Center’s staff, she felt this was the right number to allow her choices to resonate with the spaces available in the main gallery. Nancy Rivera is an influential, yet self-effacing administrator in the Utah Division of Arts and Museums, and felt that it was important to give each piece room to breathe and look its best. Anyone curious about the best way to show art in their own home, office, or to recommend as a gift would do well to study how her choices and the BDAC staff collaborated to create this eloquent effect.

In her own art, Rivera may use traditional fabric materials and techniques like cross-stitch to explore issues of identity. Her sensitivity to the vibrant and too-often neglected textile arts also shows itself, at the Statewide, in her choice of Rosanna Lynne Welter’s “Sow the Wind,” a multivalent masterpiece that foregrounds two- and three-dimensional modes of construction to initially represent the nostalgic theme of a homestead in a meadow. But the appliqué that initially resembles a floral path can also be read as the flames of a swift wildfire, while the trapunto background beneath suggests the elements in action: the swirling wind and incendiary grass. The way the smoke surrounds the homestead threatens it, yet also suggests how it may yet emerge intact. 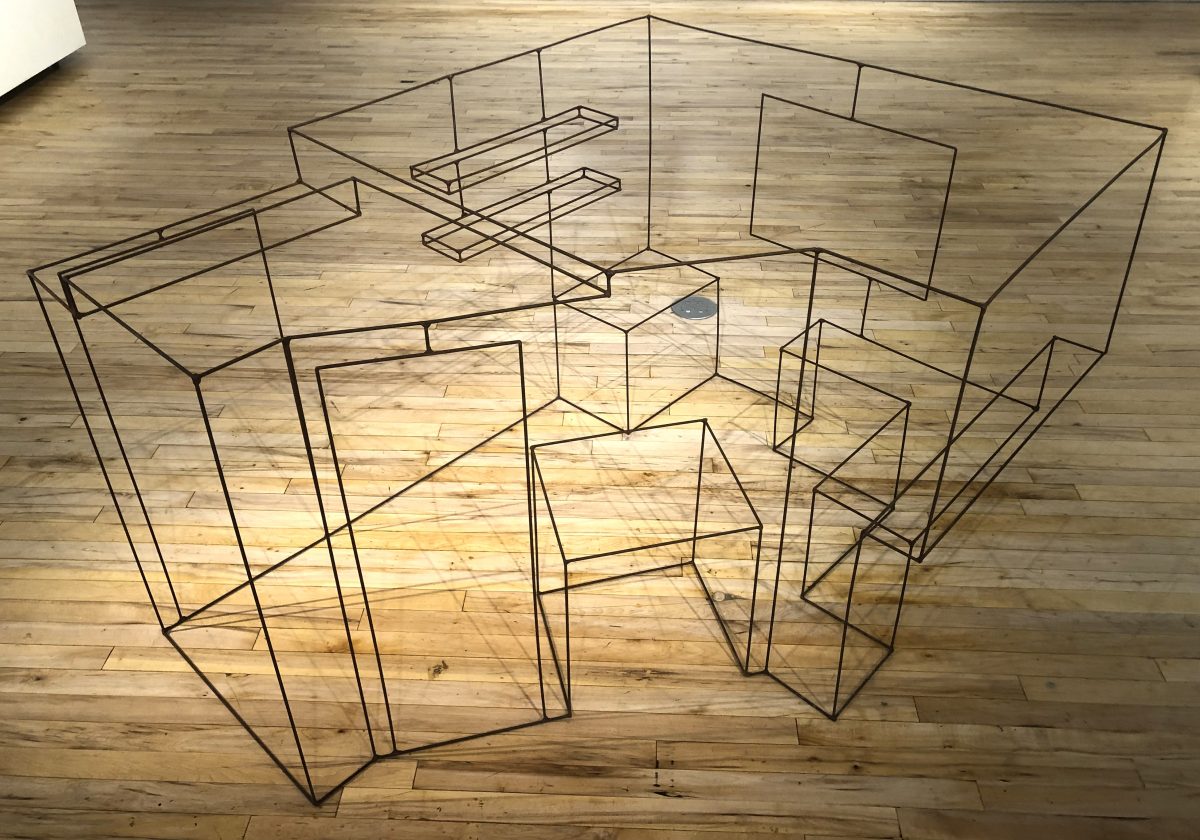 In the midst of so many deeply-felt and thought out comments on the natural environment, an artist might have something to say about the radically different environments we humans build for ourselves, and Jeffrey Hampshire may have done just that in a wire sculpture he named for one of those succinct German words that sums up a paragraph in a single term. “Sitzmark” is the transformation made on a locale when something sits in or on it — like flattened grass, the ashes of a fire, scraps of a picnic lunch. The longer one sits, the deeper and more irreversible the mark will be. Hampshire’s sitzmark is the empty form and outline of a habitation, complete with a door, a window (or alternatively, a flat screen TV), shelves, and furniture. Insubstantial as a ruin, it nevertheless constitutes a form of presence not immediately measurable.

Call it style, call it a voice, but between an incomparable palette and signature brushwork, Maureen O’Hara Ure has crafted the most unmistakeable visual presence around. In a place where the landscape is usually taken to mean the high country, imagined as majestic and dramatic, hers is an intimate land possessed by mythic atmosphere and narrative details. Winter is the season when most gardeners mulch heavily and cut back their annuals in anticipation of Spring, thereby making the dormant period look as sparse and expressionless as possible. O’Hara Ure’s “Winter Garden” is something else: the reality of life in a time of hardship. Instead of suppressing a quarter of the year, she gives confirmation to those of us who actually favor the world in winter. Of course it isn’t just a portrait of nature; it’s also a metaphor, such as she foregrounds more forcefully in “Trouble in Mind,” where stars falling from an illuminated manuscript pelt a storm-wracked sea full of sharks. Can there be any doubt that someone in Ukraine has dreamed this exact dream? 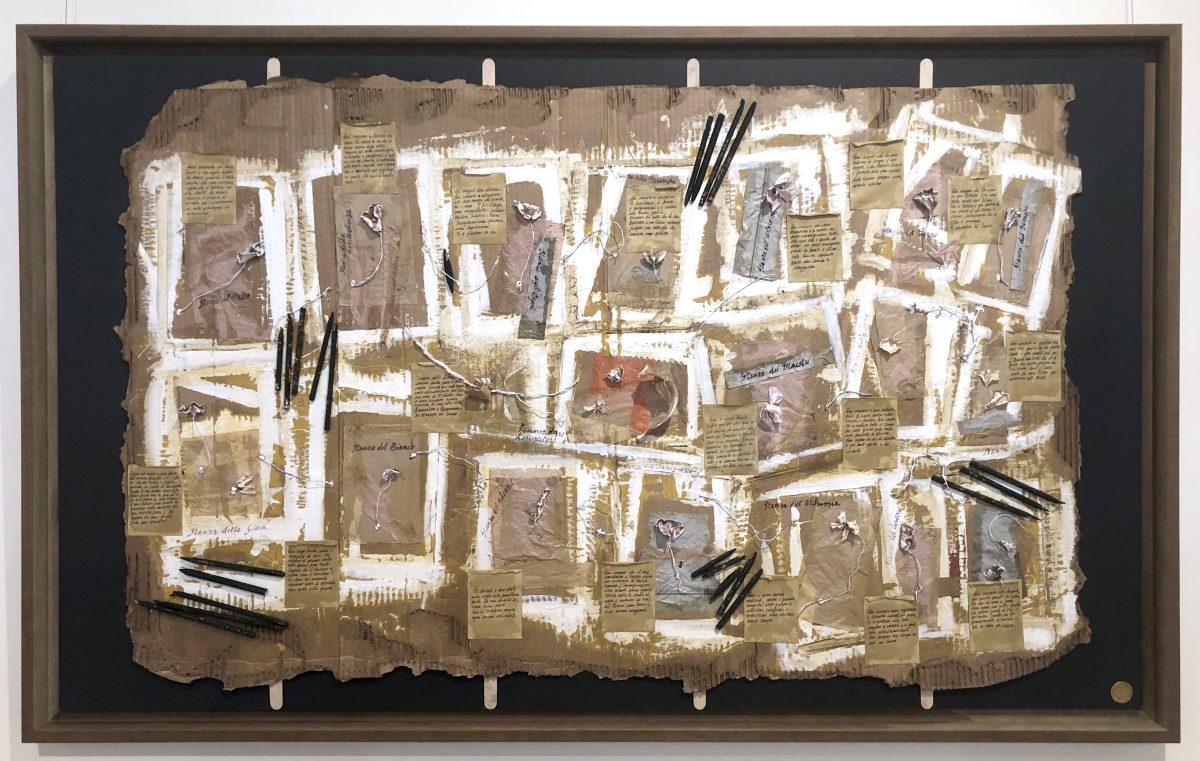 As always, much of the art that recommends itself to statewide exhibition speaks directly to the public. That’s not to say there are no private moments here at BDAC. Paola Bidinelli’s “The Ego’s Home, A Spiritual Romance,” avoids any hint of formal artists’ materials or practices to exude the feeling of a totally amateur, home-made document. That document appears to be the pages of a dismantled, or perhaps never actually bound, personal journal. Executed on a single mutilated expanse of corrugated cardboard, the pages are each framed — or invoked — by a hastily-brushed rectangle of white paint, within which each includes a flower, usually labeled, and either also inside or attached to the margin, a hand-written note or memo. Black graphite pencils and chalk markers are scattered about, as though the whole were still spread out on a table, instead of mounted to the wall on slender wooden sticks. What makes all this hermetic so far as this audience in concerned is that the entries are all written in Italian. Even if a viewer can read it, though, the flowers have all died and the rest seems on the verge of crumbling. Whoever began this elaborate testimony, it appears unlikely it will ever be finished. How much knowledge and experience are lost forever can only be imagined.

One other artist whose work is clearly a personal and private expression, yet who teaches her methods in public classes, is Samantha daSilva. The titles of her works: “I Am Bold” and “Everyday I Feel My Purpose,” illustrate the value of titles in correcting misapprehensions a viewer may come to otherwise. What initially may appear to be densely encrusted and heavily weathered old shards of building material are seen on closer inspection to be controlled and deliberate ensembles of manipulated canvas with appliqués of plaster, salt, sand, wood shavings, and paint, and what may appear impersonal is seen to be infused with a sense of identity. 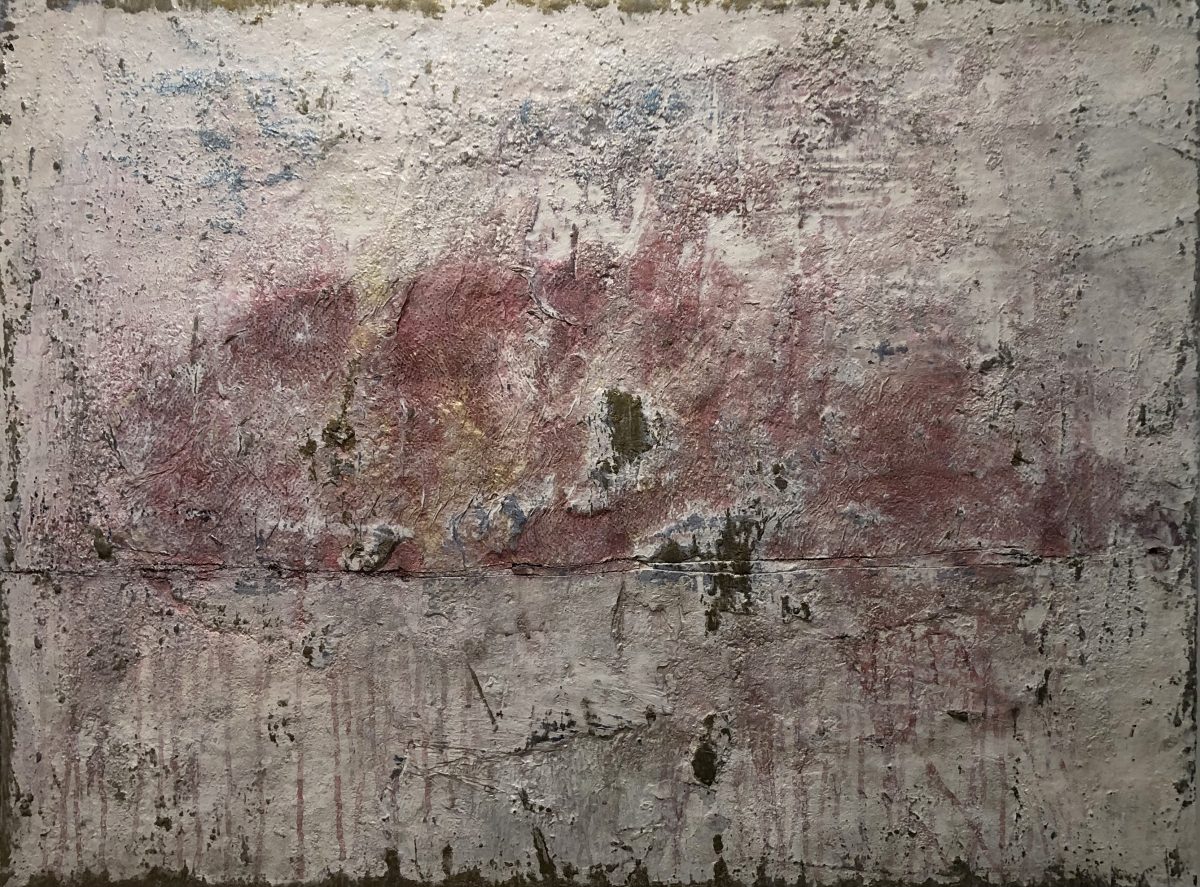 It has to have been an artist who first described religion as “spirituality in a nutshell,” because it’s particularly a problem for an artist: how to visually explore immaterial impulses without falling into the potentially divisive effects of sectarian imagery. Emily Hawkins’ “Matriarch Diptych” series may have their origins in a specific theological controversy, but her choice to begin by acknowledging the mysterious nature of her subject, which she says “hints at the line between what is known and what is felt — a blurred border space in which we can recognize that not all things that exist are fully knowable,” places her in that rare, universal space that the best art and science share. Although her matriarchs originate from photographs, they aspire towards painting; in fact, they hint at the very popular work of Mark Rothko, with whom she shares similar goals. Among the ways they differ, however, are the ethereal figures viewers may see in her clouds of color, and her choice to split each panel into two nearly symmetrical parts, like pages of a book, reflections, or two successive iterations, thereby invoking the powers of the female, even as she opens a central space for the presence of the unseen and unknown.

For each artist discussed above, there were two more showing at Bountiful Davis that could also have been included here. Nor is this the only program now completing 47 years. The NBC comedy show, Saturday Night Live, is also 47. The connection, if it’s not immediately apparent, is that it’s hard to imagine anyone declaring this to be Saturday Night Live’s best year. The 2022 statewide, on the other hand, might very well be the best ever. But then so might last year’s, and most of the years before. Art is one of the few things that does well even when society falters; in fact, art is known for getting better when times are bad. No one knows how many art exhibitions there are each year, nor how many artists nor how many works of art, but we can be grateful for both the quantity and the quality of the art we have. 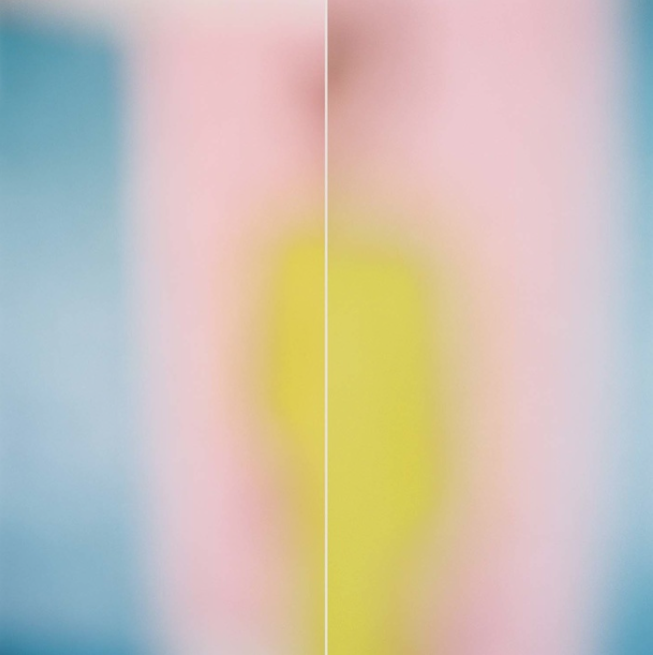