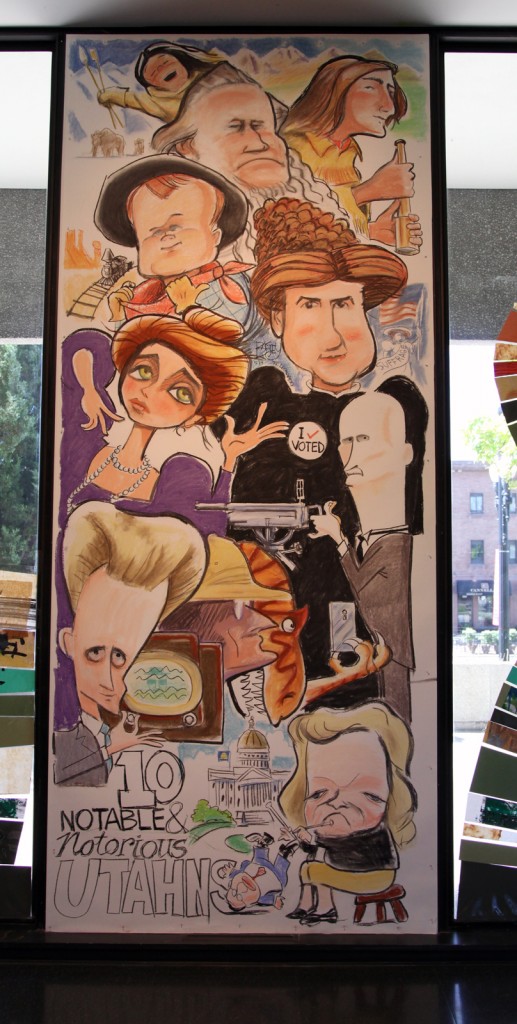 So who ended up in Pat Bagley’s “Sinners and Saints” mural at the Leonardo? In the course of revealing the ten on Saturday night, the long-time political cartoonist for the Salt Lake Tribune discussed with 15 Bytes who was the most complicated to draw and the subject he had the most fun with. Remember, he was looking at the impact these people had, not just their notoriety.

Jedediah Smith, in the upper right corner, an explorer who was killed by Comanches “pretty close to 200 years ago” at the age of 32, after surviving three massacres and a bear attack, was the most complicated for Bagley because there is only one portrait of him extant “and I tried to extrapolate from that sketch how he might look and had to do a cartoon of that. I realized he was a pretty good-looking guy and I think he may have looked something like that,” Bagley says.

“The one I had the most fun with is the first Utahn, because that had to have been somebody who is the first person to set foot in what is now the state of Utah. It probably happened 15,000 years ago,” Bagley believes.  “In my imagination it’s some kid who’s running out ahead of the rest of the group, because that’s what they do, so that’s in the upper left hand corner. This kid goes over a rise and he sees a mammoth – that‘s the Ice Age in Utah. It’s groovy,” he says.

He’s not used to working in such a large format — editorial cartoonists work small —  so Bagley claims his 6 foot by 15 foot mural gets better as you go toward the bottom. That’s nonsense, of course, though he says he gained better control of the unfamiliar chalk medium as he worked along. “You really can’t tell,” he says, “but to me, as an artist, I see that.”

Maybe it’s just because he’s drawn Brigham Young (in the middle) and Gayle Ruzicka (bottom right) so often during his career. Seems he’s even drawn Philo T. Farnsworth, the young inventor of television, a time or three. But I don’t recall bald arms-maker John Browning, or the round-faced Butch Cassidy, shown by the train tracks (the son of a Mormon bishop whom Bagley described as “a better cowboy than a Mormon and a better outlaw than a cowboy”); beaded actress Maude Adams famed for playing “Peter Pan” on Broadway in 1905; or Martha Hughes Cannon, a medical doctor and the first female legislator in the United States “who ran against her husband and won,” though I may just somehow have missed them over the years. Finally there is “Dinosaur Jim” Jensen, the BYU paleontologist, whose career in the Utah-Colorado region spanned 23 years.

Bagley, who was a finalist for the Pulitzer Prize in Editorial Cartooning this year and won the prestigious Herblock Prize in 2009, has penned more than 10,000 cartoons in the 38 or so years he has worked for The Salt Lake Tribune. Sixty of those are on exhibit at the Leo, along with the mural. This may be one of your last chances to see his work if the newspaper goes under, as State Sen. Jim Debakis and others predict it will. Bagley gave time to Debakis and his campaign to save the newspaper at the Leonardo unveiling. www.SavetheTribune.com is asking for signatures requesting that the Justice Department investigate the recent changes to the Joint Operating Agreement between the Tribune and the Deseret News that it claims diverts revenue to the LDS-Church-owned paper. A rally was held by readers on Saturday:   http://www.sltrib.com/sltrib/news/58004548-78/tribune-news-deseret-revenue.html.csp

Tagged as: by Ann Poore, Pat Bagley, The Leonardo