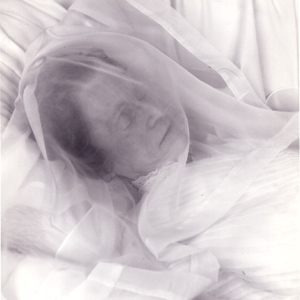 This weekend, a group of friends, including honorees Charles Bowden and Rosalie Sorrels, sat in Ken Sander’s living room to celebrate the tenth anniversary of Ken Sanders Rare Books. The night concluded a manic month-long series of events in his store, including visiting authors, performers, and artists.

Not planned was the first snow of the season that herded the thin-skinned indoors, instead of joining the weatherwise who huddled in the back yard, backsides around Ken’s Transtar 5000 Whole Animal Cooker. All, however, enjoyed Ken’s hospitality and his generous spread of grilled ribs, chicken, lamb, brisket, and his famous pork butt. The few vegetarians and Ramadan-celebrating Muslims who couldn’t eat meat until 7:30 p.m. brought appropriate cuisine and beverages for themselves.

Featured on Ken’s living room walls was a large assortment of rare rock-and-roll concert posters, and the room’s flat surfaces accommodated piles of recently-acquired vinyl record albums. I arrived at Ken’s straight from installing two of my pieces (“The Circus Is in Town” and “The Cold War Jesus”) at The Pickle Company’s Exposed exhibit. A dozen artists are showing large-scale mixed-media works that explore the legacy of the atomic bomb. When I put several exhibit invitations on the coffee table, people started talking about nuclear issues. 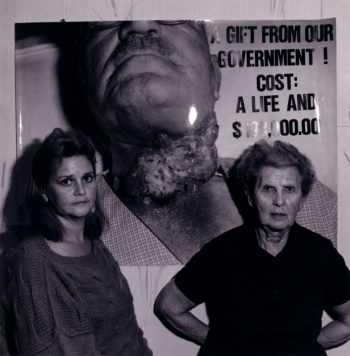 U.S. aboveground atomic testing in the Nevada desert from 1951 to 1963, when John F. Kennedy signed the partial nuclear test ban treaty, blew up 128 bombs and spread a downwinder effect on Utahans and others across the country. This does not take into account the 828 underground tests that ended in 1992, of which about 50 percent leaked, with some plumes soaring 16,000 feet into the air. Utahans and others received radiation decades after the atmospheric tests stopped.

One of Ken’s guests told us about her grandparents who suffer from tumors on the frontsides of their bodies (but not on their backsides) that doctors must frequently excise.

She said that in the 1950s, when the signals for the atomic bomb tests sounded, many in the community, including her grandparents, would watch the great mushroom cloud explosions, knowing there was no danger, because they were told so by government agents. “Now, they suffer terribly from radiation exposure,” she said.

After Atomic Energy Commission documents of the 1950s were declassified in 1979, however, we learned that the radiation fallout clouds produced by many of those bombs were comparable to Chernobyl, , according to The New York Times environmental reporter, Keith Schneider.. 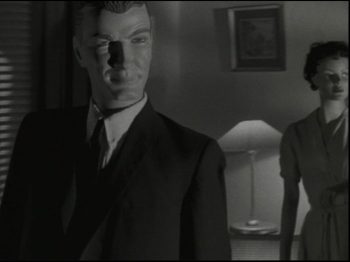 A film still from “What Rough Beast,” an installation by Jan Andrews

As Carole Gallagher relates in her award-winning book, American Ground Zero, in 1995, retired mortician Elmer Pickett of St. George said, “They done to us what the Russians couldn’t do.” This is not a line out of a Tom Clancy techno-thriller: the “they” he refers to is his own government.”

In May, 1995, the Salt Lake Art Center exhibited Gallagher’s “American Ground Zero: The Secret Nuclear War.” She included seventy-one black-and-white photographs, with accompanying text panels. And this year, as The Pickle Company’s Artist-in-Residence, she shows a selection of her photographs from the series in Exposed.

These works chronicle Gallagher’s passion, if not her obsession, and speaks volumes of an American political and military atrocity on its own people as human guinea pigs unawares —the moral, biological and environmental fallout of what she calls a ‘secret nuclear war.’ 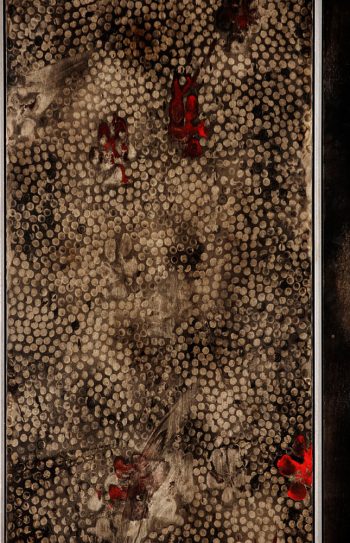 Detail from a diptych by Suzanne Kanatsiz

As I wrote in a Salt Lake Tribune article* at the time, Gallagher’s “investigation, which she conducted with the tenacity of Nazi hunter Simon Wiesenthal, deals mostly with the victims of nuclear testing, not military strategy or national-security issues. Hers is a human approach, yet it is not fashionable or comfortable.”

The downwinders, atomic veterans, and test site workers whose lives are vividly portrayed in American Ground Zerocould have included the relatives of Ken’s living room guest.

As Gallager wrote in her book, “They don’t have identification numbers tattooed on their wrists, but they do carry scars on their bodies from multiple life-prolonging operations and radiation-caused deformities and birth defects.”

It was a grim reminder of dangerous times to sit in Ken’s festive living room near the end of 2007 and listen to a story about tumors and bad health that plague “downwinders” so many years after nuclear testing.

It’s been forty-five years since the last plume of radiated light spewed its contaminated dust into the planet’s wind currents. The health hazards and environmental effects of nuclear testing have lingered for almost a half-century, and they will extend far into the future. Upcoming generations of artists will continue to show through their work what Gallagher says is the “grotesque that has something to do with our moral center as a society, as a culture.” 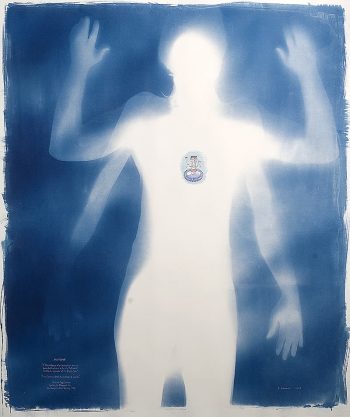 Exposed, is a harbinger of such contemporary aesthetic bombshells from artists living on downwinder soil: literally all artists everywhere, and every living thing on the planet, survive the radioactive particulate from atomic testing by America and the former Soviet Union that spun the Carnival roulette wheel of The Cold War.

This exhibit is being shown in coordination with Plan-B Theatre’s world premiere of Mary Dickson’s new gripping play, Exposed, from which the exhibit derives its name. The Rose Wagner Studio Theatre, HEAL Utah, the Salt Lake Film Center, the Temporary Museum of Permanent Change, and the Utah Bioneers have also planned activities to explore the legacy and impact of nuclear testing. These events, linked with Gallagher’s American Ground Zero of a dozen years ago, are tangible markers of a national tragedy with consequences far beyond Utah’s borders and the Twentieth Century from which it initially radiated. 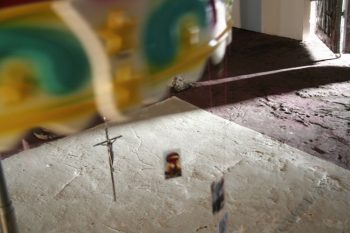 Detail from “The Circus is in Town” by Frank McEntire