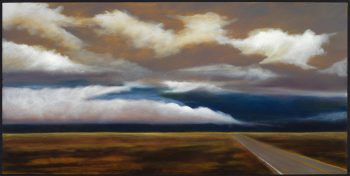 Call me crazy, but I dream of going back to school — this time to earn a BFA in painting. I already have B.A. and M.A. degrees in speech and drama, but acting and directing are no longer my passions. I want to paint really well. Am I too old, I wonder? Can I compete successfully with the younger students? Will I have to re-take math or science? (That would be the deal breaker, I’m afraid.) And, perhaps the most important question of all, and one that my husband asked, “Why?”

To answer these and other questions for myself, and to share some hints and tips with you, I interviewed two “non-traditional” students (that’s what they call us older folks who are not entering college straight from high-school or missionary work), as well as Nevon Bruschke, academic advisor in the art department at the University of Utah.

I’ll start with my trek to the U. Having taken classes in the Art Building on South Campus Drive at the U., I know that parking can be a challenge, so I take TRAX. Huffing and puffing up the hill from the TRAX stop, I wonder if doing this on a regular basis will get me into shape or kill me, and I try to imagine doing it loaded down with art supplies. (Note to self: find out process and cost of acquiring a parking pass.)

I’m feeling a bit insecure as I enter Bruschke’s office. I am not usually age-insecure, probably because I hang out with people approximately my own age. But as I walked into the building I couldn’t help but notice that most of the people I see could be my grandkids, had I married right out of high school. Would Bruschke be a kid, too? Would she regard me as someone serious and capable of success as an artist/student? Or would she see in me the beginnings of senile delusions?

Bruschke, though a lot younger than I, is no kid. She’s warm, friendly, and extremely helpful as she explains the process for applying to the art program and the requirements for graduation. And she assures me the U has quite a few non-traditional art majors (she estimates five percent) so I would not be alone.

Here’s what I learn I must do to enter the program:

1. Submit an application to the admissions office, providing them with my alma mater so they can request transcripts.

2. Once they receive the transcripts, meet with the transfer advising staff to determine which, if any, general education requirements I will need to take.

3. If I want credit for any of the art classes I’ve taken as a non-degree student, or credit for my current skill level, I must submit a portfolio to the Art Department faculty. If I’m not satisfied with their ruling, I can meet with faculty members to plead my case. (Actually, I’m thinking that while I might be able to avoid basic drawing, I’d really enjoy taking it again.)

4. Assuming I’m admitted to the University, I can begin taking art foundation classes right away. I don’t need to apply separately to the art program unless I want to major in graphic design, which is a competitive program.

5. I can start classes in fall, spring, or summer semesters.

6. I can go as fast or slow as is comfortable. Brushke recommends against taking more than two studio classes per semester.

All this sounds very exciting and it’s all I can do to keep from running over to the admissions office and starting the process. But I still need to examine the “why” question, and for that I turn to Laura Boardman, a 2004 BFA graduate from the U, and Jan James, a 2008 BFA graduate from Utah State and a current MFA student at the U.

Why go for an art degree later in life?
Boardman, who returned to school in her 40s, after her kids were grown, earned her BFA in 2004. But that’s not what she set out to do when she applied to the University of Utah. She had an associate’s degree in interior design and had founded and operated her own interior design firm for 22 years. She was a mentor to other entrepreneurs and worked with students at Salt Lake Community College. Since she didn’t have a degree, she didn’t qualify for an adjunct faculty position, so her husband suggested she return to school for a business degree. One year into her business studies, she realized that she most loved the creative side of interior design – not the business side. It was then she decided to enter the BFA art program.

Boardman knew she wanted to make art, but she wasn’t sure what the degree would do for her. As a business owner, she had hired college graduates whose degrees seemed irrelevant in the workplace; “I still had to train them,” she says. But now, with the BFA degree in hand, Boardman realizes the value that piece of paper represents.

Unlike workshops and other informal training, an art degree program provides “a structure for learning art,” said Boardman. “Art skills are layered, and without the foundation layers, you’re going to miss something important.” She also found the relationships with faculty and other students stimulating.

Boardman also points out that a BFA or MFA on the resume may be a tie-breaker when it comes to getting into galleries or juried exhibitions. She relates the story of a friend who often juries shows: If the decision is down to two artists and one has a degree, the art graduate will most likely win the opportunity. The juror knows the degree represents an extra level of dedication, preparation, and seriousness about the work.

Jan James, a Bountiful artist and mother of seven grown children, hoped the BFA and MFA degrees “would give me more credibility. I had taught at Bountiful-Davis Art Center for years and students would always ask me about my degree,” she says. “Perhaps, I could have learned enough in workshops, but I didn’t want to learn in isolation.”

Like me, James wondered if she was too old to go back to school, but, she says, “I found that the experience I’d been gleaning through experiential education was valuable. I didn’t realize how valuable it was. It made finishing at Utah State much easier than I expected.”

James values the learning process more than the degree. “I’ve enjoyed it so much, I don’t think I’ll ever stop.” She also likes being challenged — not that raising a family wasn’t challenging, but “being challenged in an academic way is nice,” she says.

She has also made new friends and had interesting experiences. “It has opened a lot more doors,” says James, “and provided more contacts with people in the art world. It has kept me abreast with trends in art and brings a new richness to my work that I couldn’t have gotten on my own.”

What about the downside?
When asked about the sacrifices and hardships on the road toward a BFA, Boardman readily acknowledges there were plenty. “For every credit hour [she generally took 9 hours per semester], I could count on about four hours of homework per week.” That’s 36 hours of work, mostly in the studio, she says. “Though I loved it, there were days I’d be in class or the studio early in the morning, and wouldn’t come out of the studio until after midnight.”

Though she tried at first to maintain her interior design business, she soon realized she could not do both. She closed her business and settled into the full-time student routine.

There were also some challenges related to age and, perhaps unconscious, bias on the part of faculty and students. Over and over she was asked, “Why are you doing this?” She felt in some ways her age was a stigma and she had to work extra hard to prove herself.

James acknowledges that she gave up some family time to go back to school, but “I gained some alone time,” she says. And, yes, she was a bit nervous in her first weeks on campus. “When my professor told me I needed a pencil and a scantron for an exam, I thought ‘scantron’ must be some new technology. My daughter explained it’s the answer sheet with bubbles used to mark answers on exams.”

James says she’s experienced no rudeness as an older student, but she laughs about the study abroad trip she took with fellow students at Utah State, when one young man asked her to hem his pants for him. “The other students jumped all over him for asking,” she says, “but I helped him out.”

Boardman describes what sounds like a love-hate relationship between faculty and non-traditional students. On the one hand they appreciate the way older students participate in class and ask good questions. On the other hand, some faculty, especially those who are younger than the older student, may feel challenged and annoyed by some questions.

The bottom line: earning a BFA is life-changing
In retrospect, the 4-5 years and extreme lifestyle change it took to earn a degree was well worth it, says Boardman. As a skyscape painter and storm chaser, Boardman sees her surroundings differently. “I walk rather than ride my bike. I ride my horse rather than drive,” says Boardman, “so I can take time to see [nature].”

Her husband, who encouraged her to go back to school in the first place and has been supportive all the way through, has become more interested in art himself. He plans to take up sculpting when he retires.

Boardman’s paintings are in two galleries – Patrick Moore Gallery in Salt Lake City and Gallery 24 in Torrey, UT. In addition, she frequently enters juried shows and competitions because “I enjoy competing against my peers.”

James is enjoying the MFA program at the U. Even though it’s a larger school than Utah State, she finds the faculty accessible and friendly. And she’s soaking up everything she can. “I feel like I’m still becoming, still experimenting, and trying to put what I learn into my work.”

James shows work in juried exhibitions; she’s in the Fall Exhibition of the Utah Watercolor Society at Finch Lane Gallery until Nov. 10.

Call me crazy, but the benefits of returning to school are ringing louder than the warnings of challenge and sacrifice. Guess I’d better get started; I wouldn’t want the distinction of being the oldest, living art major to graduate from the U.

Tagged as: University of Utah