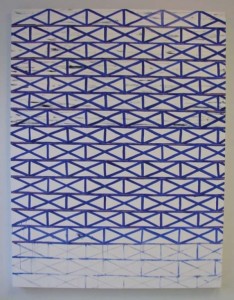 At the Artists of Utah Office Holiday Party this evening I was pleased to meet Austen Diamond, a writer and editor for City Weekly. He told me he mostly writes on music but that in this week’s edition he has contributed two visual arts articles. So I checked them out.

One is on House Gallery’s exhibit of Allen Ludgwig’s , Unforgotten Realms, which I had checked out during the December Gallery Stroll. Had I not read Diamond’s piece I wouldn’t have known about the Dungeons and Dragons influence in Ludwig’s lo-fi, geometrically-oriented abstract works. Knowing this facet made me reconsider the works, but not for very long — probably because I didn’t play the game as a kid.

The second piece is on an exhibit by Shaudmo (an alias) at Blond Grizzly. It’s a Facebook-inspired exhibit. The artist downloads profile pictures from the pages of pretty girls, superimposes his own images of monsters on them and then reposts them, tagging them so that all the friends of the pretty girl will be able to find them. As Diamond reports, the artist is self-admittedly misogynistic in his approach, and says his work “[is a statement] about what Facebook is.'” If this exhibit is a commentary about how Facebook is a vapid popularity contest then Shaudmo seems like that creepy kid in High School who was more obsessed with the popularity of the popular kids then the popular kids were themselves. The kind you suspected might turn into a stalker. But I’m not much of a Facebook person either so maybe I just don’t get it.

Two hundred years ago you had to have a background in the classics and the Bible to “get” most of the art that was being produced. These days we’ve traded in those elitist sources for more populist ones. Is it a good swap? I’m not eager to go back to the days of lounging Venuses and prancing Apollos, but if I don’t even have the time to keep up with the fads that inspire art these days, how can I keep up with the art? And in a decade will I care about either?