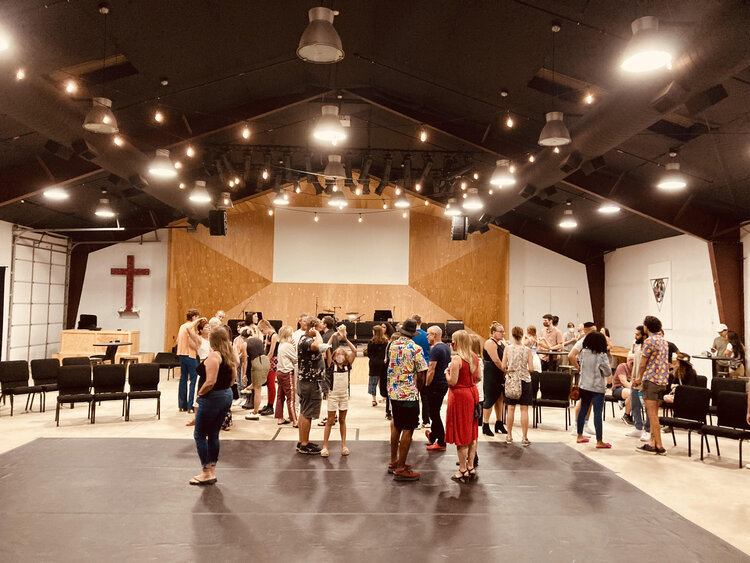 I am so grateful that FOR YOU: a works in progress showing occurred last weekend. I didn’t realize how badly I’d been craving live performance and it seemed the rest of the audience felt similarly. Everyone who entered the space appeared genuinely ecstatic to be there – eyes were shimmering, hugs were tight and long, those who were unmasked sustained huge grins throughout the evening (and those who were masked probably did too, it’s just hard to tell!).

Following a long tradition of works-in-progress showings held in churches, the DIY, low-stakes event took place at Salt Lake City’s Missio Dei Community Church. The presenting dance artists introduced themselves by sharing the event’s mission, “a humble attempt towards re-capturing and re-enlivening the sense of community and mutual creative spaces that might have been lost during the ever-persisting Covid-19 pandemic,” and by acknowledging the local artists who created similar platforms before them, particularly Dominica Greene and Courtney Mazeika for last summer’s A Shedding and loveDANCEmore’s Mudson series, which I hear may be returning this fall. Along with the land acknowledgement, the artists shared that 50% of the night’s profit would be donated to the Missing & Murdered Indigenous People Mutual Aid Fund, led by the efforts of Denae Shanindiin. I was absolutely thrilled to hear this, as I’m often frustrated by the fact that all presenters acknowledge the indigenous lands they’re occupying, but infrequently state any actions they’re taking to redress the atrocities that indigenous populations continue to face. The Geraldine King Women’s Resource Center received the remaining 50% of the proceeds.

Corinne Lohner’s Untitled opened the show and began with projected video of landscapes (mostly sand) and bodies (mostly closeups of freckles, birthmarks, and moles) in silence. Lohner began dancing a few minutes in, creating a soundscore that I hadn’t heard in far too long – the skin of bare feet squeaking on marley. Jon Kim’s Process and Material followed, an improvisational score he’s been working on for seven years. He was invisibly tethered to a desk and chair that he sinuously spun and crawled upon and next to. Both Lohner’s and Kim’s works were serene and meditative.

Megan O’Brien (the evening’s organizer) and Natalie Border shared that they began the process for their offering, Foxhole, only five days before the event. Working together for four hours each day, they devised a movement study inspired by songs they like, which resulted in a motley soundtrack of Post Malone, Nine Inch Nails, Leonard Cohen and Francisco Tárrega. I couldn’t help but wonder if there was something more behind this piece that they didn’t vocalize, perhaps because their long, crimped hair and below-the-knee dresses reminded me of the young LDS women who circle the Temple daily. This event did take place on Pioneer Day, afterall…

The next two works were creations of Mar Undag’s. A Study was a group piece that, for the majority of the time, juxtaposed a duet (performed by Maddie Maravillas and Kellie St. Pierre) with a trio (performed by Conner Erickson, Emma Sargent, and Alicia Trump). This work featured clear motifs and attention to the energetic arc, and can be seen again in an upcoming performance with Cat + Fish Dances. Mar was then joined by Elliott Keller for a duet that they collaborated on, 8.10, which was incredibly intimate and tender. The two melted into each other, sweetly entwined their limbs, and moved with such ease that I felt comforted and swathed in love from my seat in the audience.

Kellie St. Pierre closed the evening with a screendance titled Alpine Waves II. St. Pierre produced minimal yet powerful movements, in turns working with and against gravity as her weight shifted between ropes that were anchored on either side of her body. Colorful, animated dots and stripes were layered over the moving image, sometimes so much so that St. Pierre disappeared. It was at times overwhelming (intentionally, I believe) and mesmerizing, and was a refreshing respite from the predictable formula that so many screendances have adopted as of late.

In addition to the dance artists, painter Halley Bruno created a live painting that began as the audience entered and was presumably completed by the event’s end – unfortunately I forgot to return to the space where Halley was painting before I left the venue. FOR YOU’s facebook page stated, “We want to continue this work in SLC by perpetuating these spaces and letting them be available for anyone who wishes to be involved,” leading me to believe that this platform intends to bring our community together again in the future. Stay tuned…