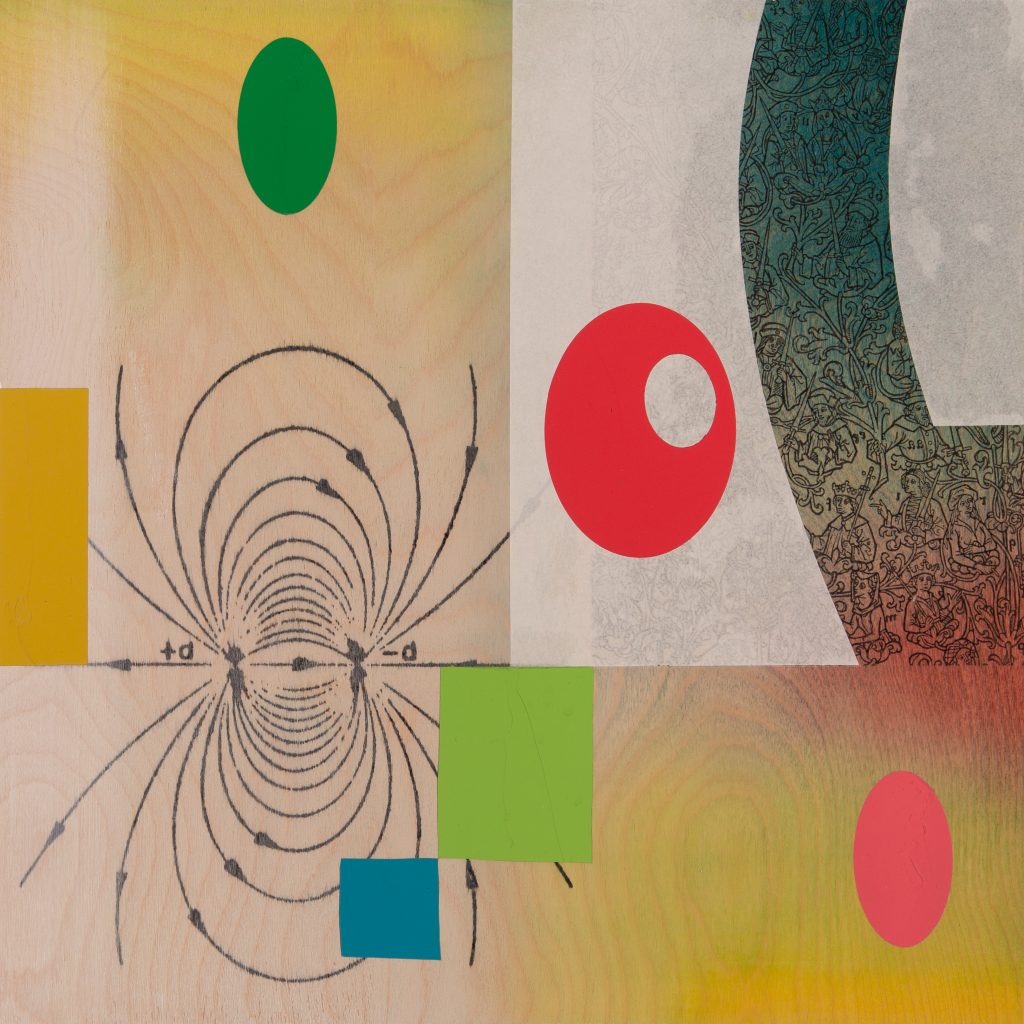 If you’re driving over the speed limit down Main Street in Ephraim you might miss out on a hidden gem of the Central Utah art scene. Granary Arts is exhibiting a chronological collection of works by Richard Gate, a Utah-affiliated artist who spends winters working out of his studio and residence in Mount Pleasant and Spring City. Anthology displays works spanning from Gate’s early 1985 compositions to those completed in 2019. While this collection serves as a visual autobiography of the artist, it simultaneously reflects, through an alchemistic style, humanity’s inherent desire to understand existence through art, history, science, and symbolism. An individual approach to collage, linguistic meaning-making, texture, and optical juxtapositions each contribute to Gate’s postmodernist interpretation of age-old imagery. However, instead of a nihilistic hodge-podge of recycled images, Gate’s oeuvre causes the viewer to marvel at how individuals and societies can evolve from point A to point B through migratory paths and combined evolution.

The hard-edge white lines of the panel borders and the vibrant central geometric features of each piece recall the works of Wulf Barsch and Wayne Kimball, both of whom were mentors to Gate during his early studies. There is a careful consideration of sacred geometry and deliberate nods to certain symbols with all that they connote: lunar diagrams, atomic models, flora and fauna, and intricate infinity knots immediately reference mankind’s fascination with the cosmos and understanding of the natural world. Because Gate’s work draws upon imagery associated with a wide range of subjects, it will resonate with a variety of viewers; each image has the potential to spark discussions between scientists, cosmopolitans, and sports fanatics alike. It is commendable that he has created contemporary works that are so accessible without sacrificing the integrity of his personal style.

This idea of interdisciplinarity is integral to fully appreciating Gate’s series. Rather than presenting the fields of study he utilizes as separate, siloed subjects, he harks back to a time when knowledge was uncategorized and considered part of an interconnected, unified whole. Each panel offers an aesthetic catalog of two or three objects that demonstrates the artist’s concern with what we know, how we have come to know it and how that knowledge has been passed on.

The second-floor loft gallery features a few riveting examples of this approach. Nine birch-veneer collages displayed in a row greet the viewer on the landing. While the titles are factual, imitating a scientific observation log, they are nonetheless significant. In “Family Tree-Magnetic Field” (2005), for example, a direct image transfer of a diagram of a magnetic field and a medieval tapestry-like family tree are the only representational elements in the image. Abstract shapes seem to hover at various depths in the central square panel and contrast with the blurred kaleidoscope of color of the subtly stained veneer. In four words, one dash, and two representational depictions, Gate has touched on a fundamental part of the human experience: connectivity. What better way to scientifically describe family dynamics, be they medieval or modern, than with the poles of a magnetic field? There is a surprising amount of profundity in the way the science is displayed next to the delicately laced vines that connect the individuals to the right on the family tree. A reverence for the laws of nature is clearly expressed, albeit through two entirely different disciplinary approaches. 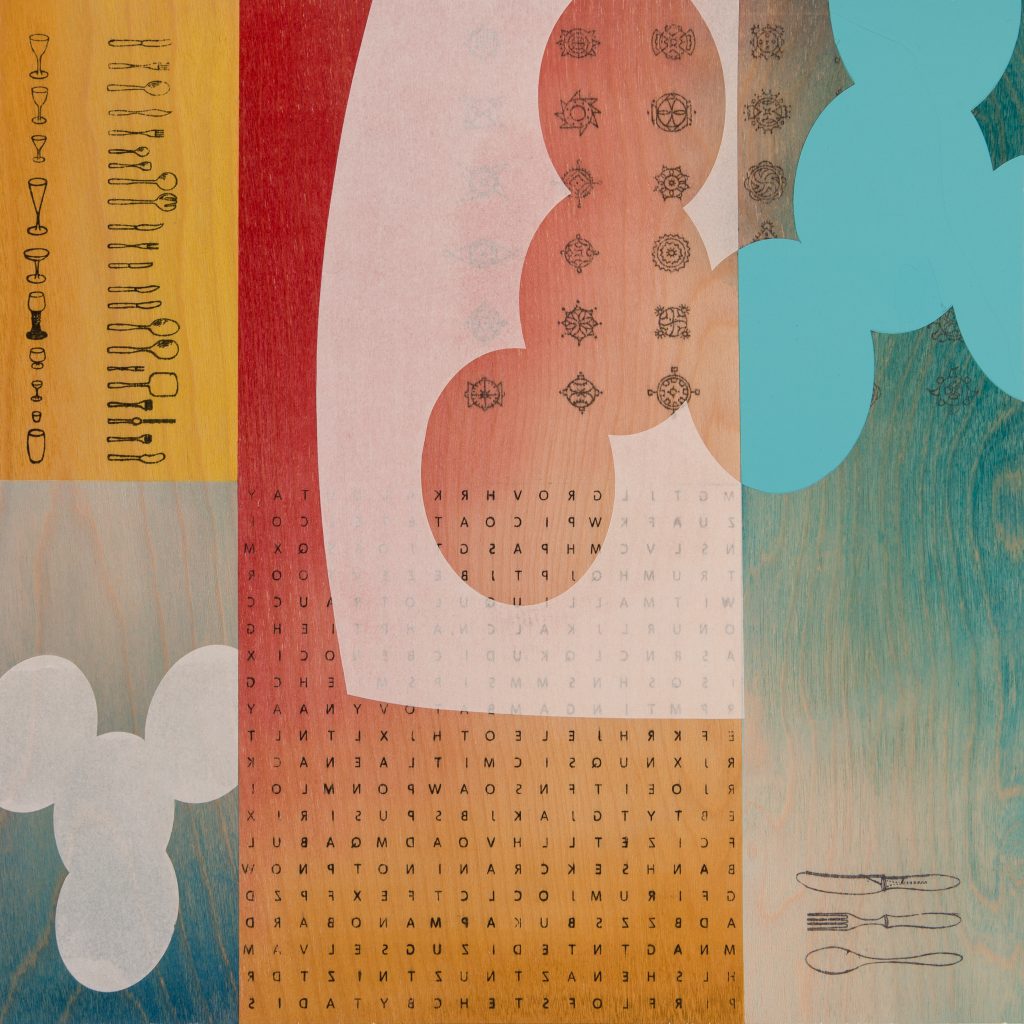 “Eat Holes in the Sky”

Other works in this series cause similar wonderment and awe at the way we have arrived in our current evolutionary place through the discovery and refinement of knowledge. “Eat Holes in the Sky” features a direct transfer of a crossword puzzle, perhaps referencing how remarkable it is to have not only created a standard system of symbols used for linguistic purposes, but that it has moved beyond the point of function and is now a recreational pastime. Similarly, “Fairplay” shows a diagram out of a sports playbook of different positions a referee will take to signal certain events in the game, which demonstrates how we have come so far from our days in the cave that we now imitate the rules of survival for entertainment. Many of these earthly elements have been reverse-transferred onto the birch panel which dramatically changes the role of the viewer. Instead of looking at the object, the observer becomes the object and sees the world from the perspective of the art object itself.

These inverted but recognizable elements of each work are typically the darkest in hue and, as such, ground the work through their implied sense of tangibility. On the other hand, the transparent, abstract, and elusive entities in the works tend to float in and out of the square frames, cropping up again and again throughout the entire exhibition but never are fully defined. While each within its own context can arguably take on different meanings, perhaps this part of Gate’s style is what represents the spiritual, indefinable element of the sacred. This is further communicated through the artist’s attention to texture. Upon first glance, the works look extremely flat, two-dimensional and geometric. However, when one spends time with each piece a world of depth begins to unfold. Experiencing Gate’s work requires the viewer to perform optical gymnastics: it forces the brain to make sense of texts and images that are backward, to assume and complete shapes that are obscured, to negotiate proportions of juxtaposed representational shapes, and make sense of the abstract in a way that coincides with the written title of the piece. Because Gate has masterfully achieved the perfect balance between the abstract, the geometric and the representational, none of these works can be dismissed or casually seen. As a whole, the viewer is struck with the impression that he or she is looking at some sort of divine, pulsating, three-dimensional blueprint. Simply looking at a photographic reproduction of a work does not do it justice. It must be experienced in person.

Although there are several breaks from Gate’s distinctive style throughout the exhibition, he always seems to come back to these types of works. The scale may change, the hues and symbols may vary, but the consistency found throughout the displayed works representing the past 34 years of his artistic and life experience speaks to his authenticity and artistic integrity. Anthology is truly a successful expression of the artist himself as well as the ideas he seeks to portray. 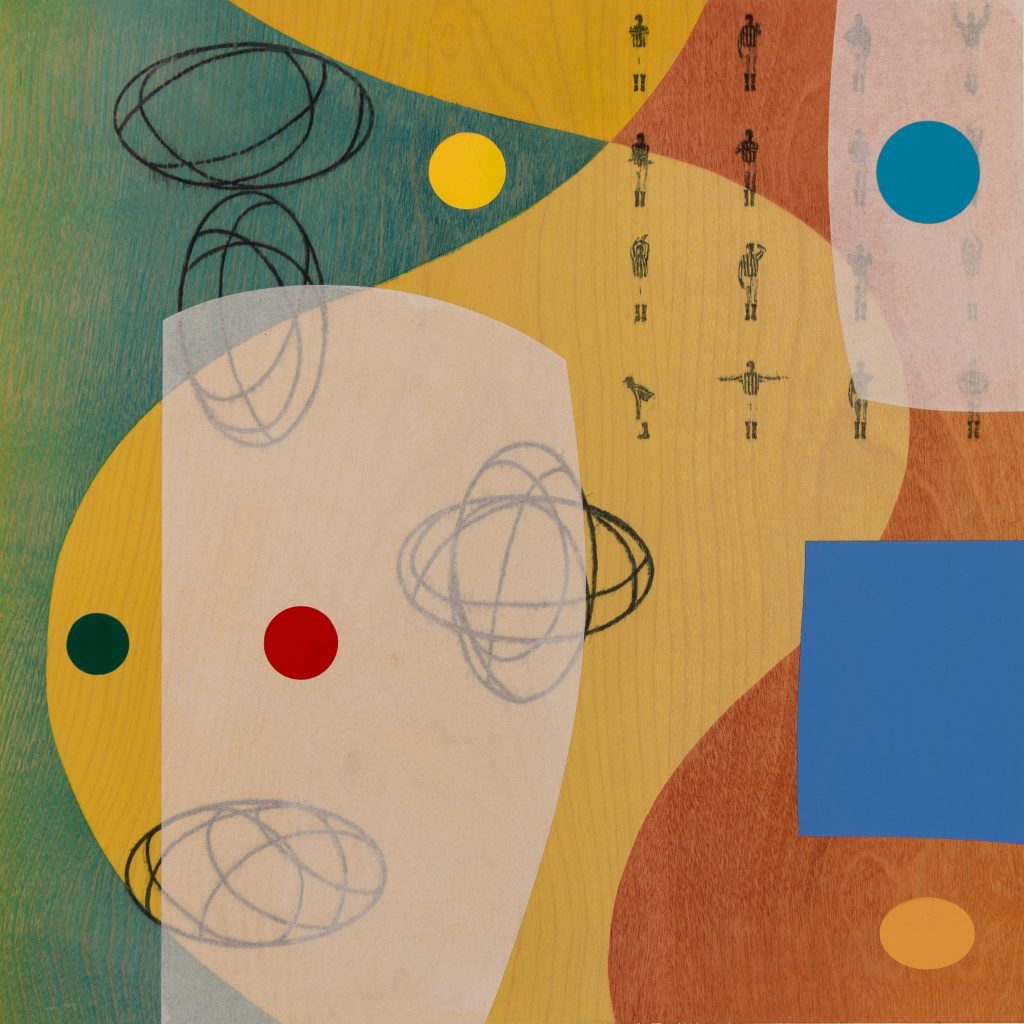