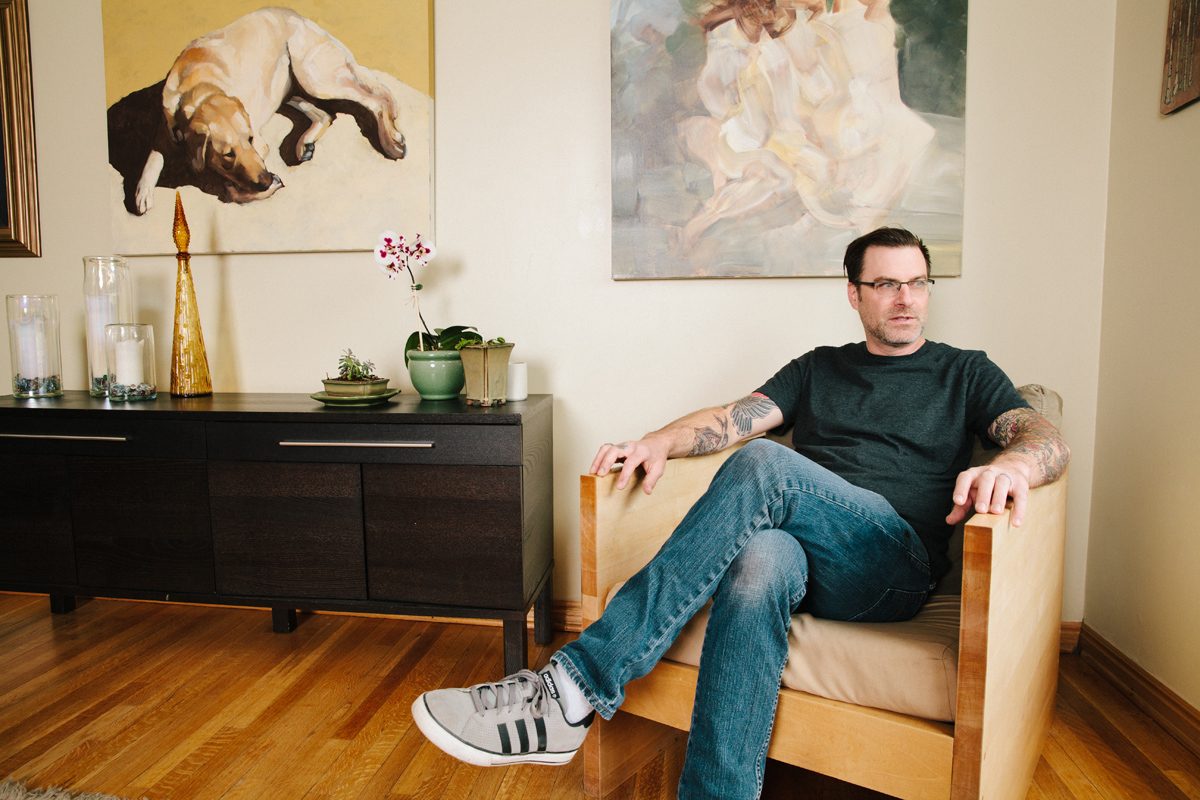 One of John Vehar’s most characteristic images, and consequently one of his best, is “Bison,” which can be seen currently at his solo show at Modern West Fine Art.  The strength of the image is in the balance the artist strikes between raw, coarse, brushwork, and what ultimately comes across as sophisticated, developed, and attuned strokes. They are highly revelatory of the tenor, and specific quality of this bison.  It is presented as something strong, yes, massive, yes, intimidating, of course; but the purposeful distortion in certain parts of the bison’s front legs, and a certain ambiguity in the haze that covers what would be the eyes of a raging animal, creates a dynamic reticence. What might seem hurried, unfinished aspects of this painting are actually what provide it with a magnetic pull. It’s the result of the artist’s approach to his figurative work: “I think if you don’t give yourself time to think too much you come up with something really good.”

Vehar’s pieces feel bold and spontaneous, and yet are the result of a lifetime of intuition, planning and practice. “I used to be a house painter,” Vehar says, “and I think of [my process] like that. There was a lot of prep time, but the actual work is pretty fast. If you spend the time and sketch things out, if you do a lot of prepping, you know where it is going to go. You don’t need much more than that, really.  It’s a progression. Process is everything. Subject, not so much.” 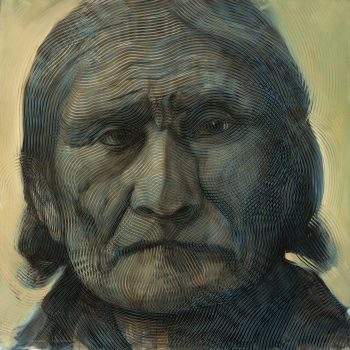 Vehar’s subjects tend toward the figural, be they human or animal, and accordingly, his process is the means to a more figurally expressive end.  This progression, starting from what is seen in the most rudimentary charcoal renderings, is already distinctively his, with the mark seen in the brushwork, here in its nascent stages, boldly aggressive in the line of the rendering.  In its entirety, this process is a coming to terms with the tactility of the body in space in the final piece, the figuration, and the placement, the animation, of both the primary structural forms, and more subtle gestures of being alive.

Vehar grew up in Utah and Wyoming, the great-grandson of immigrants from Slovenia and Bulgaria who worked at coal mines in Rock Springs, Wyo. “My mother and I moved to Utah when I was 6 years old,” he says. “My dad moved to Jackson Hole, so I go back every year, and I feel like I identify with Wyoming.”  An only child, he says he has worked on art all of his life.  “I always felt that this is who I am, rendering, sculpting, this all came naturally to me.  I did everything from technical illustration to portraits of historical figures for history books, but I have always painted. I just didn’t exhibit.”

That began to change when Vehar decided to become a stay-at-home dad. For 20 years he had worked as a graphic designer, and before that as a technical illustrator – “very technical,” he says. But when his children were born — he and wife Meredith have a 7-year old boy and a 3-year old daughter — he decided to stay at home. “During that time, I was thinking, ‘What am I going to do with myself?’  I thought I had been trying to bring my best work to the table, so I thought I would give my painting a shot.”

He does numerous preparatory studies in charcoal before he approaches his canvases. “When you take charcoal [process] and put it onto a canvas, you feel, that moment, you just need to let yourself make the lines, to feel it, and if you don’t think too much about it, you’ll get whatever you want, because you are in feeling mode. You’ve already thought about it, you’ve already drawn it, you’ve already figured it out, it’s the muscle and once you’ve touched it three times on the paper, you only need to touch it once on the canvas because you’ve already made the movements with the muscles in your hands.  It’s a part of your subconscious already.”

He paints out of the garage of the 1910 gingerbread-style bungalow in the 9th and 9th district he and his wife have lived in for the past 13 years. The array of used brushes stuffed into cans and bowls of mixed paint atop a cacophonous palette belie the crisp clean work Vehar did as a designer and technical draftsman. But it seems perfectly adapted to the large expressive canvases that have found a home at Modern West.

“I think it was serendipitous or luck of the draw, but I had some friends who pointed me to Modern West, thinking I would be a good fit,” he says. “At the time, there was the ‘Year of the Horse’ show going on at the Natural History Museum, and I happened to walk into the gallery with my promotional material when they were looking for people to show horses, and within a month I had my work in there.” 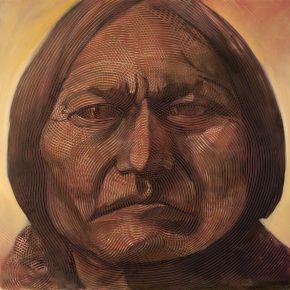 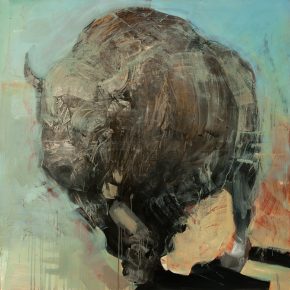 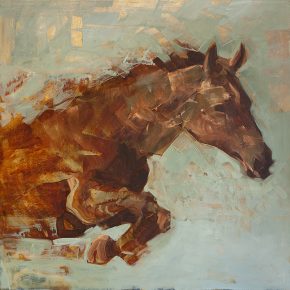 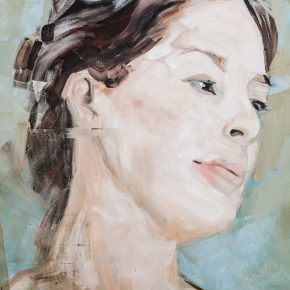 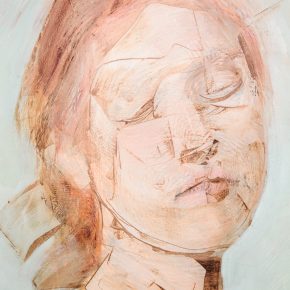 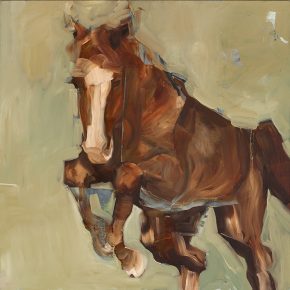 His solo show that opened in March features some of these horses, as well as bison and bighorn sheep. One might think of it in terms of wildlife art, which would not be surprising from a Wyoming boy, but Vehar’s works are really about painting and expression. His paintings combine both technical expertise and explosive energy.

For any artist, the ability to foreshorten is no easy task, and no matter how many “sketches, sketches, sketches,” it will take a well-schooled, and well-trained artist to capture not only the form, but the inner-energy, the inner-inertia, the intensity, and the spirit of a horse like that in “Trudy-O,” where the animal is taking an almost frontal leap from the canvas into the viewer’s space. Not only has Vehar rendered every muscle with facility and grace, but with a sensibility to this particular horse, as it takes its resplendent and so articulately animated stride. As the expressive line of the artist seems to melt into a fabric of sinewy muscle, the gestalt of the horse is fully felt, as the inner-energy, the inner-inertia, the intensity, and more than anything else the radiant, spirited energy of the horse is fully and expressively conveyed.

Modern West also features a number of portraits exploring iconic figures of the American West. “I like to feel things,” he says of these portraits, based on photographs of figures like Sitting Bull and Geronimo.  “The reason that I wanted to paint the portraits at Modern West is I wanted to feel their faces. I wanted to know them.”

An example of this is “American Portrait II.”  The portrait has a very frontal, close-up view, so it is not necessary to know just who it is that is being connected with, only that there is a connection, and in every respect, this connection is made unavoidable.  With a more structured line, and using an application of linear varnish over the surface of each portrait, Vehar creates what he calls a balance in the linear and loose, thus creating the gestural.

“You take a tool that is technical, the lines appear tight, almost like an etching, but when you look at it, the applied glazes, you find that it is as uncontrollable, as loose as a brush, which brings the feeling into it, it brings the empathy into his expression.  It’s the way I’m trying to feel the piece, it’s the way I’m trying to heighten the piece.  It helps me to know that person. The tool is limited but the artist is not limited and when those two things clash, you push the boundaries a little bit.”

And these curvilinear lines are there to heighten that connection with the very distinctive face, in a way that reads as more psychological than the intense gaze the eyes already radiate. This psychology created by the layered varnish patterns work on many levels, from a heightened conscious of connectivity, a feeling of euphoria, a sense of hypnosis, a kind of vertigo that draws the viewer in, a feeling of displacement that enhances the power of the figure being looked at, even a schizophrenia that creates a duality and an altered reality of a sense of being and perception.

These portraits came about as a direct result of the exhibit. “When you are creating a body of work, for a show, for example, you have your influences, you have your ideas, and there is some intangible element ‘in the air.’  As you are working on the show, even at the very end, your work may turn 180 degrees, whatever makes the best show; you don’t have to be a painter, you need to be an artist.” 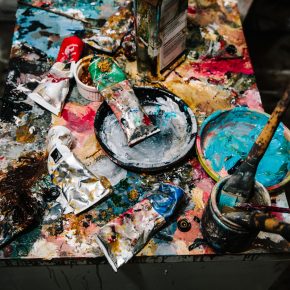 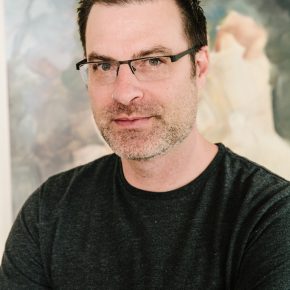 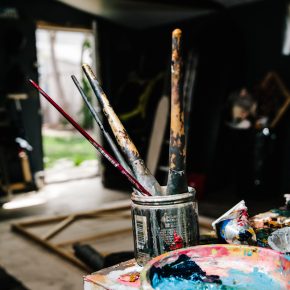 What we do not see at Modern West Fine Art is the range of Vehar’s expressive approach to the figure, which is something quite revealing.  In a figure called “Fear,” the portrait head is already handled wonderfully well; her hair especially is striking, as it is so loosely handled yet so acutely palpable.   Her face, which is in a three-quarter-profile view, is turned gently to the right.  She has lovely soft lines, and one gets a lucid sense of just who she is.  But one wonders why she is given the title “Fear.”  She is quite beautiful, and in her soft and feminine lines, with eyes that radiate, could second for a biblical “Eve.”  But it is her companion piece that gives her the title, “Fear.”  In the companion piece, “Resolve,” she is given the same linear equilibrium as “Bison,” that expresses so much, while conveying her naturalness.  Her eyes, like “Bison,” are hid, but not in a gesture of reticence, in a gesture of introspection, self-composition, and inner being.  The “fear,” in “Fear” is Vehar’s own reticence, and his own fear in being unwilling, afraid, to take “Fear” to that level of gesture and self-expression.

The Modern West exhibit suggests and the work in his studio confirms, that Vehar has an exciting and vigorous attraction to the fundamentals of painting, which animates his process and ultimately allows his work to function on many exciting levels.  These can be both experimental, with evocative and edgier effects on audience sensibilities, to more hushed and softer features, the kinds that aren’t as easily recognized, but the kind to imbue a subject with frailty, strength, and grace. 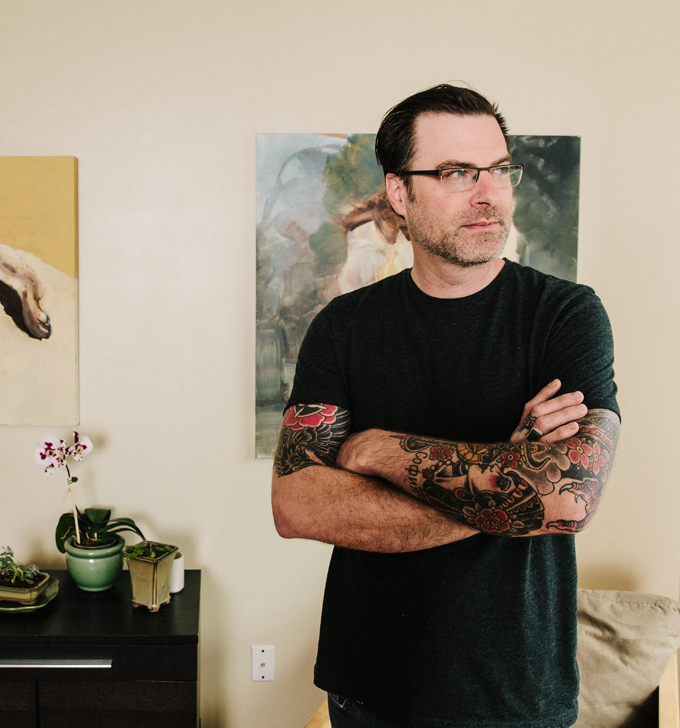