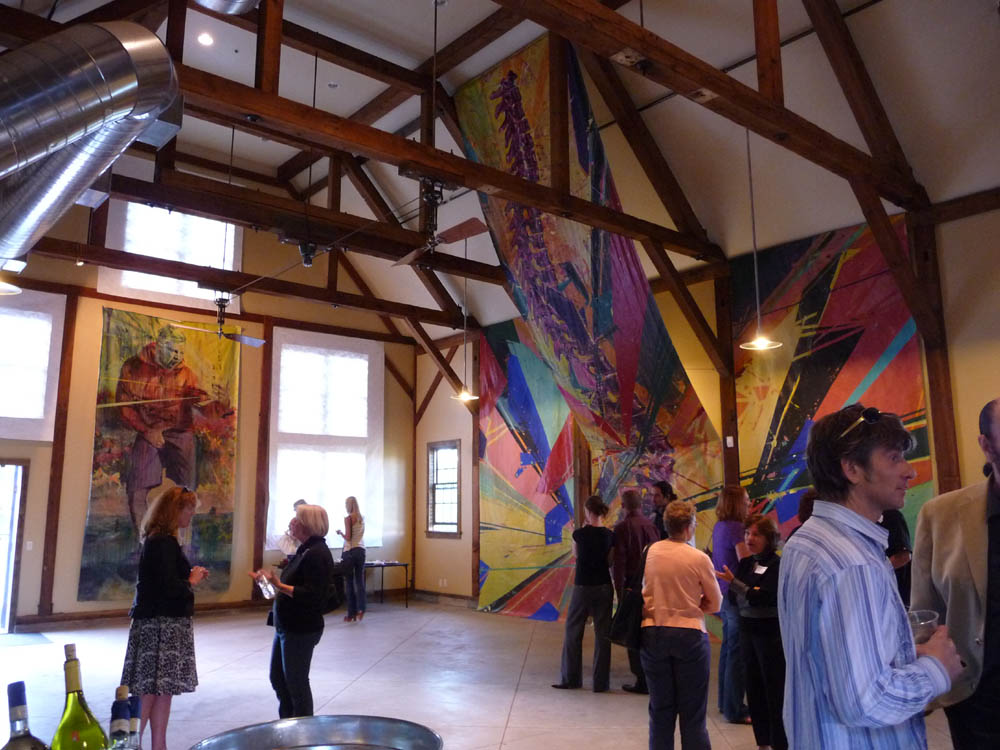 Ben Wiemeyer
likes to work big. For many years “big” meant graffiti art thrown up on the sides of buildings, the aspect of his work that usually generates interest in local media outlets. But Wiemeyer, a University- trained artist, also likes to work big when exploring aesthetic issues in his more institutional paintings and his generative sculptural machinery.

Wiemeyer, who is the Preparator for the Salt Lake Art Center, has a sculpture degree from the University of Utah. For years he has explored an interest in creating machine structures that generate an “art” residue. For the 337 Project in May 2007, he created a machine that went back and forth across a suspended cable, spewing paint as it went; the residue created a two-dimensional work on the surface of the walls. Last summer at Present Tense, the Art Center’s follow-up exhibit to the 337 project, Wiemeyer created another machine to cut up his mammoth self-portrait (an act that shredded some of the narcissism inherent in making a two-story portrait of oneself).

Wiemeyer continues to work big, and last week he unveiled a group of large-scale works created at a month long residency at Spiro Artsin Park City.

At the Spiro Arts residencies the artists have an entire month with nothing to do but create art. When Wiemeyer applied for the residency, he proposed working on his series of large-scale portraits — a body of work that explores the cult of celebrity and hero worship in a society that makes people like Kobe Bryant into larger than life figures. In these works, Wiemeyer wants to do the same for the heroes in his life — the fellow artists and friends that affect his work and life.

When he got up to Park City Wiemeyer found getting started difficult. “It was hard for me,” Wiemeyer says. “I didn’t do anything for the first four or five days.” He didn’t think his original idea to paint his friends as icons would work. There wasn’t enough time. Besides, he wanted to do something site specific. 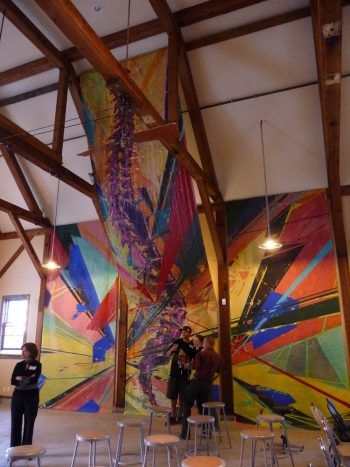 Wiemeyer stands in front of one of his works

Wiemeyer decided on a series of paintings that would wrap around the exterior of the Spiro Arts studio space. He liked the idea that rather than being safely ensconsed in the confines of the exhibition space the work would approach you as you approached the space. It has something to do, he muses, with the idea of “intervention,” of confronting the public gaze, that he dealt with in graffiti art. He worked on the pieces — which feature the prominent image of a spine surrounded by hard edge and loosely rendered marks — on the floor of the studio space. As he worked he climbed a ten foot ladder to try to get some view of what was going on, but he was really only able to see what he had accomplished when the paintings were installed.

The final work was a triptych, with a center piece measuring 26′ x 7′ and two side pieces, 16′ x 7′ each. Wiemeyer was excited when he was able to see the piece, in its entirety, installed on the building. But he was one of the few that did. Days before the reception — but after invitations announcing the exterior installation had been sent out — Wiemeyer found the paintings torn and flapping in the wind. “The only thing that bummed me out was that we had already told everybody they’d be outside,” he says, taking it all in stride.

Moving the pieces inside made him see them in a different light. Literally. The interior lights warmed up the colors and brought increased attention to his marks, some of which he admits did not hold up as well indoors. Bringing it inside, into the “preciousness” of the gallery space changed it from “a banner feel to more of a painting.” The interior display also changed their scale. Rather than being dwarfed by an immense and never-ending blue sky, they seemed to take over the interior space. 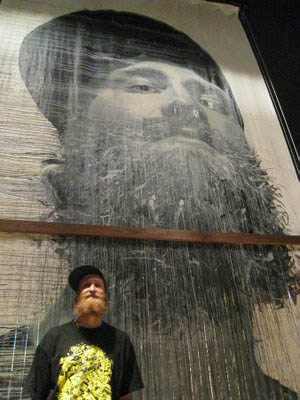 Despite the hazards of creating works as large as sails and putting them out in the wind, Wiemeyer still likes working big. He plans on executing his icon portraits. One, of artist friend Sri Whipple, was shown at the Spiro Arts reception. The experience at Spiro Arts also has him excited about exploring installation art, about its ability to “take over a space . . . where you forget where you were. Like walking out of a movie theatre and seeing the sun and going, Oh, wow it’s still light out here.”

You can watch an interview with Ben Wiemeyer at the Captain Captain Studios blog. Or catch him painting live on the relatively small scale of a garage door at the 337 Project’s Urban Gallery Face Off, June 12th and 13th. For details see page 3.