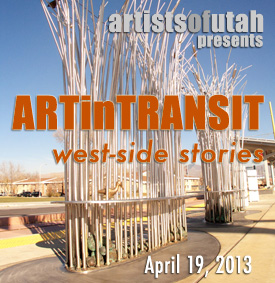 WHERE:            Start at Mestizo Gallery, 641 West North Temple, Salt Lake City, UT  for Erik Daenitz’s photographic history of the Westside along the TRAX line, and  then travel the new airport TRAX line, stopping at each station to view public art.

Salt Lake City Arts Council and Artists of Utah have partnered with Salt Lake Gallery Stroll to offer a special event spotlighting public art at stations along the new North Temple Airport Light Rail Line.  Visitors are invited to start their tour at the Mestizo Gallery (641 W. North Temple), which is featuring a photographic history of the Westside along the TRAX line by Erik Daenitz.

The first 200 art strollers who arrive at the gallery after 6:00 p.m. and mention “15 Bytes Gallery Stroll” will receive a free TRAX pass for the airport line that evening.  With pass in hand they can get on and off to look at art on the line’s six station platforms. Three Utah artists created art for three of the stations: Ruby Chacón (Jackson-Euclid Station), Darl Thomas (Power Station), and Shawn Porter (1950 West Station). These and all the artworks are described in a guide prepared by the SLC Arts Council which will be available at Mestizo during the stroll.

Public art is an important component of new light rail line. UTA and the SLC Arts Council have collaborated to bring art to more than 20 TRAX stations since 1998.

For more information about the three Utah artists whose work was selected for the airport line, please read the April edition of 15 Bytes (artistsofutah.org/15bytes/13apr/page1.html).