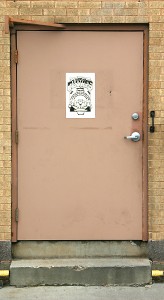 Tres Flores, Salt Lake’s newest studio spaces for artists, held their first open studio on the Gallery Stroll of December 15th. When Poor Yorick Studios was squeezed out of its downtown location in the summer of 2006 and relocated to its new South Salt Lake building (126 West Crystal Ave, i.e. 2590 S), a number of the artists involved preferred to stay in the neighborhood rather than move south. One of them, photographer, Skylar Nielsen, was able to secure a 9000 square-foot building close by and convert it into studios. The non-descript building on 5th West remained nameless until just before the December opening when, on a whim, it was dubbed Tres Flores, after the hair tonic. The objective of Tres Flores is to create an atmosphere similar to Poor Yorick and if possible to improve upon that. The result is a space which, when you enter, does seem much like the old Poor Yorick – a small space at the entry with a table and a bulletin board leads into a long hallway with studios opening off either side. The atmosphere at the inaugural opening seemed much the same, too — artwork hanging in the hallways with people trying at the same time to look at the work and move from studio to studio.

In Tres Flores, the sheetrock partitions, which turned a former lumber mill into a series of ample studio spaces, reach only partway to the ceiling, encouraging the feeling of all the artists sharing one space rather than being isolated in separate cubicles. As I asked the artists about the experience of working there, the image most often evoked was one of belonging to a family. “You might not like your brother or his music,” one occupant remarked, “but you’re living with him, so you might as well enjoy it.” There’s little formal organization; most communication seems to be done through leaving notes. Trent Call describes the tenants as “a diverse group of hard workers.” The feeling seems to be that just knowing that other artists are there all the time working in their studios serves as motivation for individuals to maybe push themselves a little harder, not so much in a spirit of competition, but because of feeling part of a group rather than being isolated. 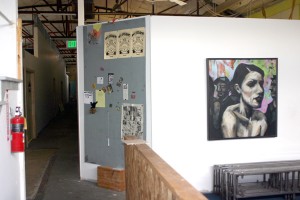 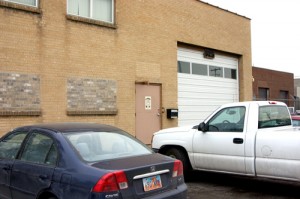 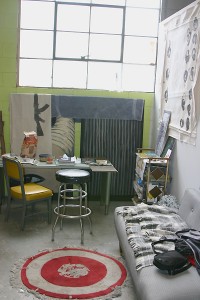 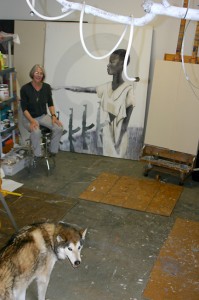 The current tenants, all but three of whom migrated from the old Poor Yorick, are: Trent Thursby Alvey, Diane Borg, Trent Call, Lance Clayton, Jenny AA Hambleton, Steven Larson, Chase Leslie, Tessa Lindsey, The Mandate Press, Tom Mulder, Sue Ann Smith, Sri Zeno Whipple, and Janet Hazel White. The space is currently full and there is a waiting list but if you are interested in future possibilities you can try to catch Nielsen, “hiding in the shadows toward the very back of the building.” “If an artist works hard and proves their dedication, I will find them a place,” the landlord says. “If an artist wants to rent space to store art supplies, I will rent them a storage shed in North Salt Lake.” The next open studio is expected to be sometime this spring. Tres Flores is located at 825 South 500 West.

This was published in January 2007 edition of 15 Bytes.