Michael Kimmelman, writing in the New York Times, had this to say about Andrew Wyeth, who died in his sleep earlier today (Friday, January 16th):

“Andrew Wyeth, one of the most popular and also most lambasted artists in the history of American art, a reclusive linchpin in a colorful family dynasty of artists whose precise realist views of hardscrabble rural life became icons of national culture and sparked endless debates about the nature of modern art, died Friday at his home in Chadds Ford. He was 91.” 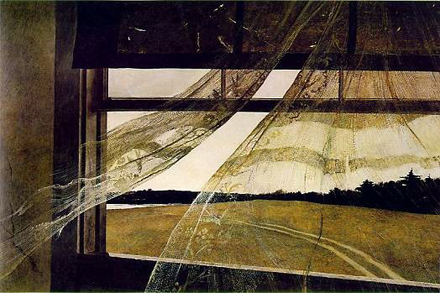 Wyeth was not a Utah artist, nor did he have any connection with Utah during his long life. But his enduring focus was on the human image, on nature as the backdrop and setting of human lives, and on things as evidence of people’s presence and the quality of their lives. And perhaps most importantly, his insistence on the validity of what was disparaged during his lifetime as “retinal art”—art anchored in how and what we see with our eyes—made certain that precise realism would continue to play a role in the discourse of American art through and beyond the years when it had few friends or supporters among the powerful who seek to control what gets seen and appreciated. As a reclusive regional artist whose work was often seen nationally, he preserved and advanced the interests of critically unpopular and regional artists everywhere. And as someone who could create controversy without resorting to shock and outrage, he showed that the tradition of representation was not exhausted, but could be renewed by just looking more closely at the world wherein we dwell.