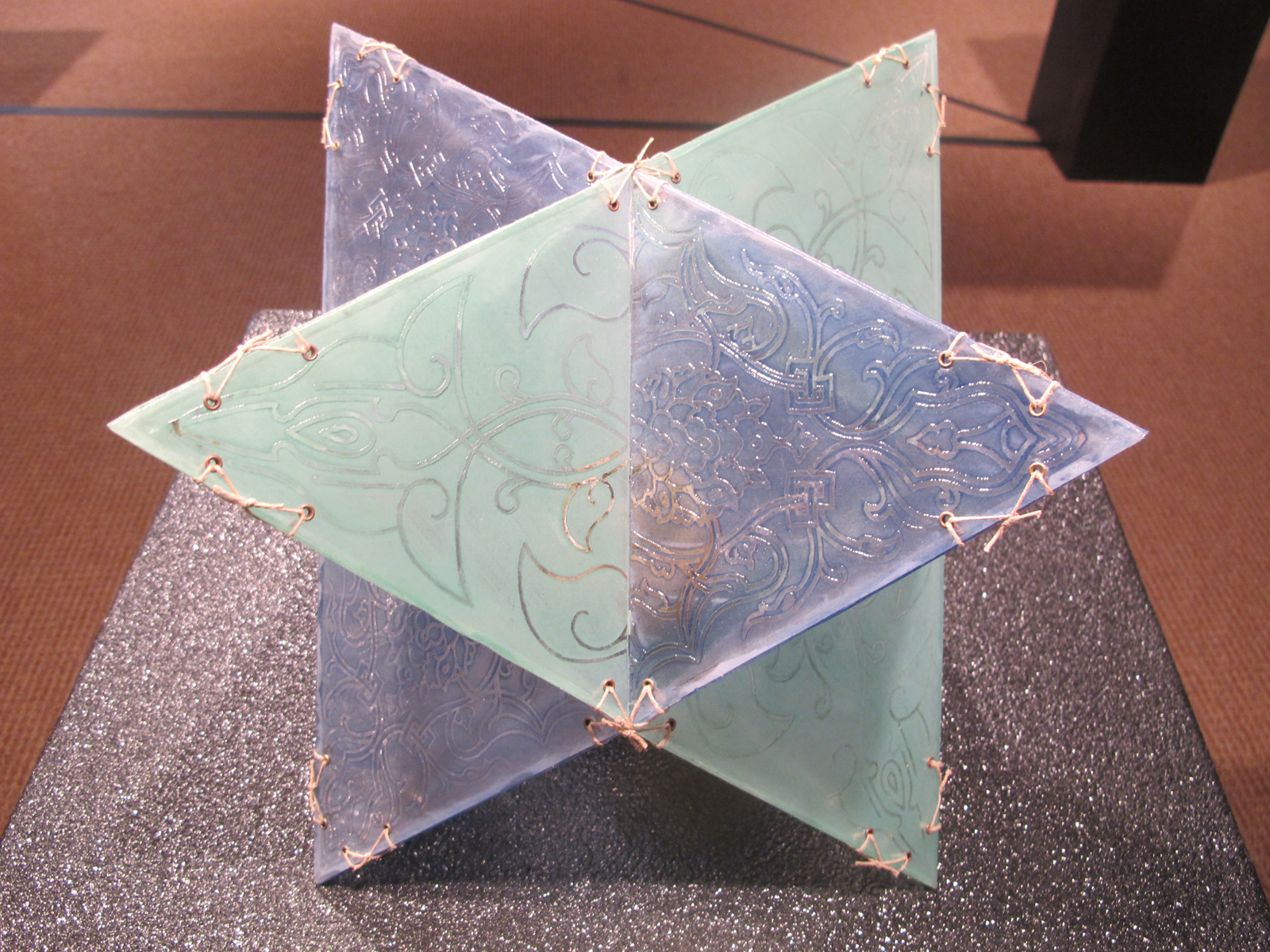 Andrew Kosorok is an extraordinarily gifted artist and teacher whose passion and talent with glass and design, and his zeal for authentic personal spiritual enlightenment and truth, are essentially linked and manifest in all of his artwork. Kosorok’s current display of work at West Valley’s Cultural Celebration Center, 99 Most Beautiful Names: A Sculptural Presentation of the Names of God is open only until the 11th of this month, and shouldn’t be missed; if you do, however, you’ll have 81 more opportunities to see his glass sculptures as with each new creation in the series of 99 pieces comes a new show in a new city. Each of the glass sculptures, frequently multilayered and enhanced by found and manufactured objects, explore one of the 99 names for God in the Islamic tradition. The current 18 sculptures, exquisitely rendered by a master in full control of his craft, explore the most erudite nuances of Islam, but also consider the connectivity and unity of the related Abrahamic religions, Judaism and Christianity, as well as other more obscure minor religious cultures. Kosorok’s sophisticated manipulation of iconography demonstrates that there is much more that unites us than separates us and there is indeed a universal reality which we are all a part of.

As I spoke with Kosorok he poignantly expressed the unity that he finds in these distinctive world religions by paraphrasing from the Qur’an: “God made everybody different to speak different languages, of different tribes and different colors, specifically so we could learn to get along better by dealing with our differences but he also reminded us that we all came from the same parents, Adam and Eve.” The essence of spiritual individuality that finds a fundamental and essential unity among diverse ancient religions is a thread which weaves its way through all of Kosorok’s sculptures and makes them not only exquisite works of wondrous beauty but objects of the most profound meaning and substance. It seems that in their utmost complexity, nothing is arbitrary, no choice is made without deliberation to articulate a precise spiritual message relevant to the name of God indicated. Kosorok uses a kaleidoscope of symbols of separate faiths within a single sculpture to convey a spiritual message, which furthers the essential idea of universal reality and truth. His artwork is a labor in progress that is a dedication to this. 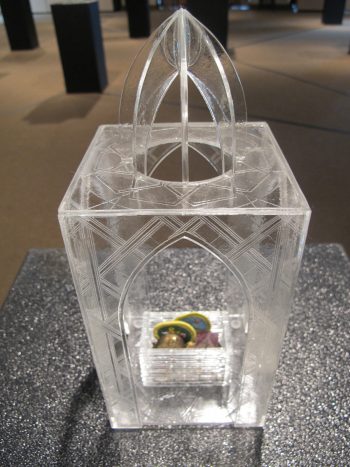 Glass serves as the central, unifying structural element in Kosorok’s pieces, but just as a glass maker will add substances to the basic components of glass (silica, soda, lime) to alter the color, reflectivity or brilliance of a piece, Kosorok adds to his etched glass found or crafted elements that allow him to reflect the profound themes he is exploring. “Bestower of Honors 24 (Al-Mu’izz)” is based on the sacred Tomb of Tamerlane, the Muslim conqueror from Central Asia who remains one of the most honored warriors in Islam. Inside a glass box at the center of the work, a cluster of Boy Scout merit badges provides a contemporary, deflated parallel from Western culture. Together, the symbols allow Kosorok to comment on a spiritual principal common to both cultures. “Recognition in this life is fleeting,” the artist says. “Real worth and validation comes only as we seek the Divine Will. Presidents, kings and emperors will all be brought to the knowledge that, in the end, the greatest honor God bestows on any of his creatures is the simple title, ‘Friend’.” Kosorok brings these two cultural symbols together to make a profound statement of the fleeting nature of the temporal and the real value of the eternal and in doing so validates the harmony of these cultural icons instead of their difference.

“Victorious 08 (Al-‘Aziz)” is a lovingly rendered sculpture that is a testament to human potential and the will of God. In this sculpture Kosorok unites Western philosophical ideas with Islamic and Christian references. The sculpture is two interlaced tetrahedrons, the Platonic solid symbolizing fire. The etched glass is green and blue, symbolic in Islam for growth and nourishment. Inside the sculpture a small flame alludes to the Christian injunction to let one’s light shine. “Divine Might is both protective and enabling: He can overpower the very fires of hell, keeping them damped and still; He can also empower us to use our talents and blessings for the greatest good.” Here we find Kosorok using Christian and Islamic sacred symbols together in a sculpture that is staggeringly beautiful and realized only as it attests in its perfect connectivity of truths essential to both faiths suggesting unity over diversity. 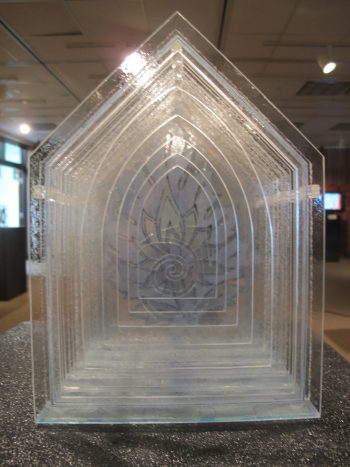 Another breathtaking example of Kosorok’s painstaking physical and laborious mental work can be seen in the structurally stunning and spiritually profound “Merciful 02 (Ar-Raheem).” In a complex arrangement of glass pointed arches, an allusion both to the Gothic architecture of Christianity and the Islamic architecture that inspired it, the eye is brought back into an abstract space, a visual dimension that suggests infinity. Etched from behind is an image from the Fremont Petroglyphs of the Western Anasazi culture symbolizing the hand of God. The power of this sculpture is apparent through a profoundly evocative visual metaphor. Kosorok states: “The Hand of God is spiritually extended to all, bond and free, rich and poor, whole and ill, who wish to partake of his infinite, eternal Mercy. Every individual who desires it may ask in faith for, and receive, Divine Mercy.” Only through the potency of the iconography and the beauty of the form does the art come fully into fruition and the portentous nature of this message truly seem authentic.

Finally, a last example to consider here is the ethereal “Abaser 22 (Al-Khafid)”, a voluminous, delicate glass etched plate sculpture of the utmost intricacy and beauty. Inside the fine iridescent exterior is a large hanging moonstone and a pile of ashes. The moonstone is taken from the Sufi tradition of Jesus, who according to that mystical branch of Islam spoke: “The moon is my lantern, my sandals are my chariot, and the morning sun is my winter’s fire.” The ashes represent the Old Testament prophet Job, who was content to live in such. According to Kosorok, “In their examples we are taught that God in His infinite wisdom is always ready to remind us of what is truly important, and has complete power to remove all that is not. All that is needful is found in active acceptance of the Divine Will.” This fine web of symbols and ideas together testify to the Divine Will and again, temporality provides only earthly distractions to a universality, of which all religions considered will readily agree.

After my experience with him, I do not think that Andrew Kosorok would mind if I describe him as anachronistic. I think he will be happy to know that I envision him among untold numbers of unnamed men who were masters of their art and created not for the sake of art but for the sake of spiritual expression and enlightenment — a type of artistic expression that is all but extinct in a secular world but is where art is historically and ideologically grounded. I am impressed by the beauty and complexity of Kosorok’s glass, baffled by the untold process, moved by the secrets that they hold and ultimately awed by the conviction and dedication that marries Kosorok to his art… his unquenchable desire to seek and know truth. 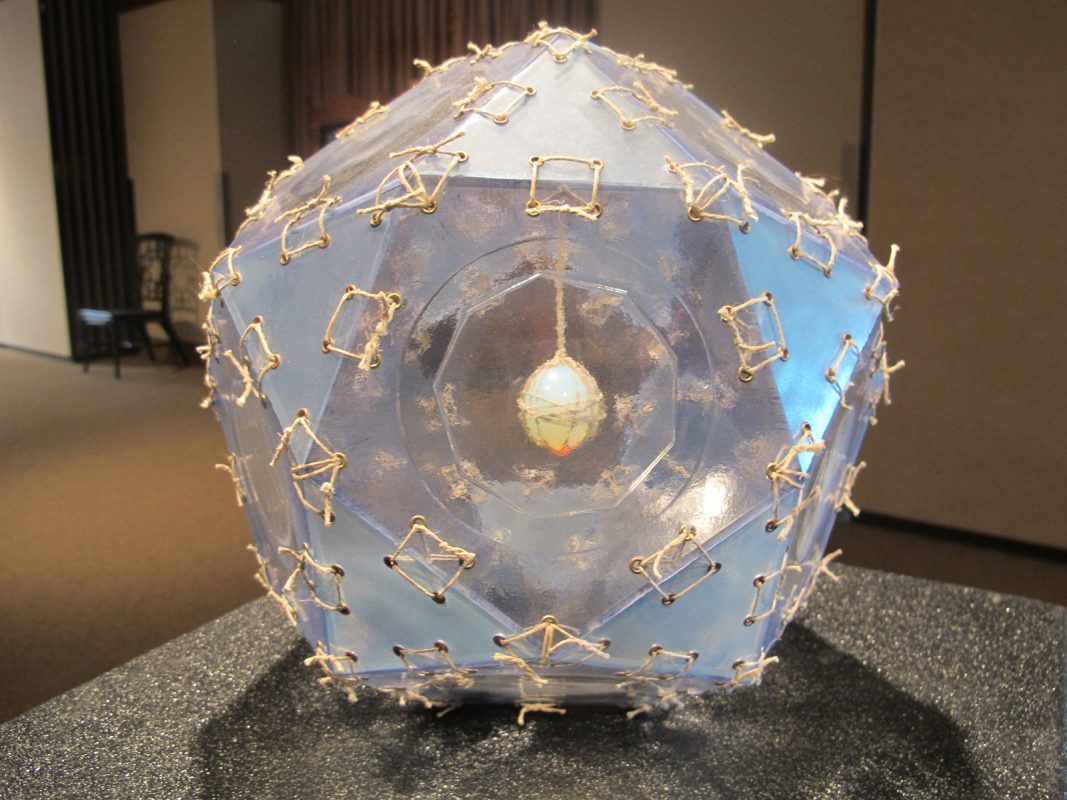 Andrew Kosorok’s 99 Most Beautiful Names: A Sculptural Presentation of the Names of God is at the Utah Cultural Celebration Center in West Valley City through Oct. 11.