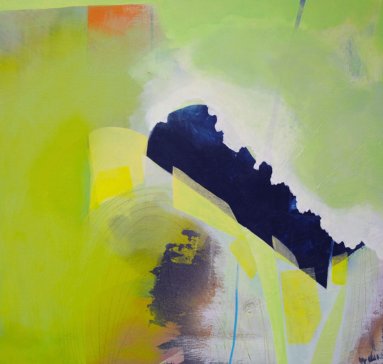 Rinsed by Andrea Jensen, on exhibit at Finch Lane Gallery.

Andrea Jensen is a masterful articulator of boundaries —  not the pretty kind, the ones you were told not to venture outside of with your crayon, but the boundaries where phenomena collide at force, where humanity is compelled to acknowledge itself.  These boundaries are “truth moments” for Jensen, who paints the truth as graphically as it occurs in her consciousness, and her semi-recognizable though mostly obscured signs of powers pushing against each other become ours to grapple with.

Consumption, consumerism, raging appetites, the rapidly growing pace of lifestyles, and race for commodities fill Jensen’s canvases with vibrant colors: reds, yellows, lime green, and intensive focal points of nearly black mark these landscapes.  Spray paint, acrylic and marker are the makings of “Rinsed,” a canvas whose title says very much.  One might imagine the artist creating this piece with the phallic like abstract form of infinity blue surrounded by psychedelic colors thinking, “Has the world gone mad?” and Jensen, with “Rinsed,” washing her hands of the mess.

Jensen’s visual depictions of conflicting forces come from her philosophical view on human society. “As a society, we alternate between a need for technological progress and a return to nature, prompted by our desires,” she says.  The dialectic between the need for technological progression and a return to nature has as its synthesis in human desires and it is here, in the willful diversity and intensity of human passions, that the paramount clash in her art erupts. 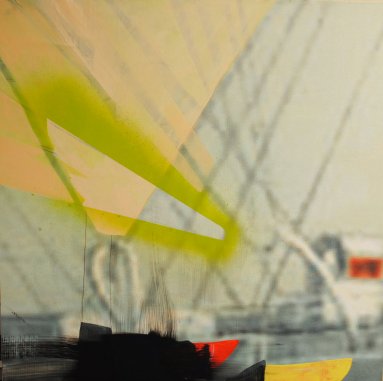 Bound to Absence by Andrea Jesnen at Finch Lane Gallery

The pictorial effects of works like “Bound to Absence” are more restrained but no less disturbing. The colors are muted except for a beam of light shining through a blurred background image.  Seemingly jutting out toward the viewer beyond the frontal plane are precisely rendered abstract opaque shapes of black, yellow and red ink.  The effect of total obscurity creates an apocryphal tone, an existential questioning of the unknown, of the fearful reality of what might be, due to the ever-willful drive of human passions colliding in their boundaries of difference. Like the general body of images in this show, it is an existential image of an uncanny nature, leaving far too much to ponder that the viewer would much prefer having answered.  The uncanniness of the work is exposed when the viewer admits there are no answers.