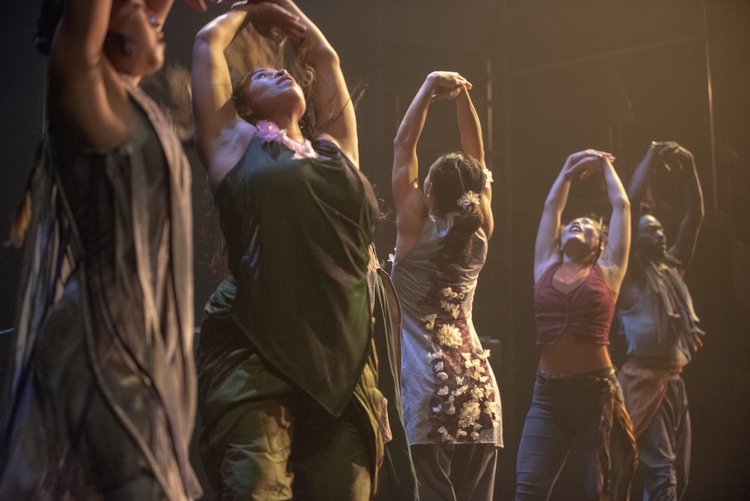 The playbill summarizes Dastak as “a meditation on borders, loss, belonging, home, and liberation. Structured through four elemental journeys — Earth, Water, Fire, and Air — the work traces the knockings (dastak, in Farsi) of global injustices on our hearts, and echoes the subtitle created by writer Sharon Bridgforth – I Wish You Me – indicating the cross-generational love that has carried communities through difficult migrations. Dastak invites viewers to imagine what freedom is possible as it expands the realms of intention and trans-dimensional connection through spells that invoke rest, forgiveness, love, and freedom.”

Ananya Dance Theatre is a company entirely made of of BIPOC women and femme artists and their presence on stage was extraordinary. Both the dance and the score was inspired by many multi-layered histories, ancestries, and influences, and it was made for the BIPOC women and femmes both performing and witnessing it. Spirit McIntyre specifically acknowledged the influence of Farsi and Hindi in the sound score. Ananya Chatterjea had a special dedication for her performance. She said, “My solo is dedicated to so many women and femmes from marginalized communities, especially those who have suffered so much torture in state custody. Lal salaam in particular to Soni Sori, Safoora Zargar, Gulfisha Fatima, Nodeep Kaur, and many unnamed others: I dedicate my fire to you.”

The raw power coming from the performers was so exciting, it was hard to not get swept up in the movement. But there were so many things to appreciate about the production. They had pieces flying in from the fly rail, they had projections, consume changes, and props. And they had a live musician interacting with the sound score as well as living inside the performance. I felt like I was on a ride for the entirety of “Water.” It felt like it was happening to me instead of me actually watching it from a distance. The first two movements were performed by almost the entire cast on stage performing together as a community. They would flow from unison sharp movements to traveling steps and rhythmic stamping of the feet as they moved. The flow washed over me and I was transported to a world that was both new and familiar. The dance almost felt like it was happening to me instead of being something I was actually watching from a distance.

And then I was snapped out of my trance as “Fire” began with a fierce solo by Chatterjea. She managed to command the huge space of Kingsbury with her presence. Another striking moment was a sensual trio between three women. They weaved in and out of each other. Sometimes it seemed there were only two people instead of three, and then they would unfold and pause in still life poses. It was a beautiful dynamic and it was performed to an equally beautiful song, the lyrics making explicit the ways in which the performers asked each other to “light my fire.” 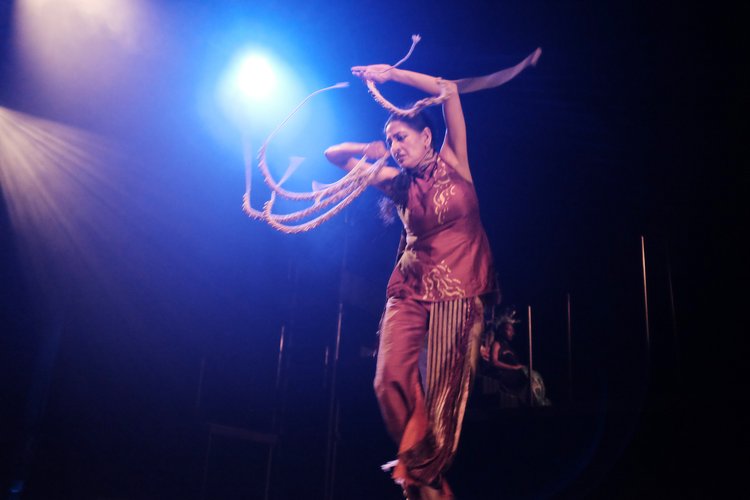 The dance closed with “Air.” This was the part that stuck with me. I wanted to buy tickets for the next night to see this section again. I couldn’t stop thinking about it. The dancers all came on with props and it seemed to be a huge celebration and also to be reminiscent of an offering of some kind. The musician was singing to the dancing group. They called to them, while the lyrics in the recorded music seemed to be both echoing that call as well as coming from within the dancers themselves. At one point the entire cast was moving so powerfully to the sound of someone repeating, “I am sacred ground.” That was so visceral. It was empowering and freeing all the way to my bones. The dance kept building and the dancers shifted from quartets to trios and they tossed props back and forth to each other, then placed them in a small altar down stage. The singing shifted to the subtitle’s song “I Wish You Me,” which was a loving farewell. The dance became gentler and more enchanting. The projection was a beautiful collage of stars in the night sky and falling rose petals. The dancers kept moving past the end of the dance, and the lights faded until they were just silhouettes against a starry sky. It was so beautiful and raw I felt sad.

If I ever get the chance to witness Dastak again, I will definitely be taking it. It reminded me of my roots in classical modern dance in the narrative structure, but it was so enriched by all the different styles, the different people performing, and the magnificent sound score.